Mr Kushner will make the short hop over from London, where his father-in-law the US President is visiting, to Brussels to meet the European Commission President this evening. The pair are expected to discuss tensions in the Middle East and other “geopolitical” matters, which could involve a potential EU-US trade war. The EU’s foreign affairs chief Federica Mogherini meet with Mr Kushner when he arrives at the Commission’s Berlaymont headquarters.

A European Commission spokeswoman said: “I think the subject of ‘geopolitical issues’ covers many subjects, as always there is no scripted agenda for these meetings.

The meeting was requested by Mr Kushner, according to the spokeswoman.

Talks will likely focus on trade issues with Brussels and Washington preparing to hold negotiations on a possible trade deal.

Washington is said to still be planning to implement potentially catastrophic trade levies on EU car exports to the US, which could hit Germany’s prized motor industry. 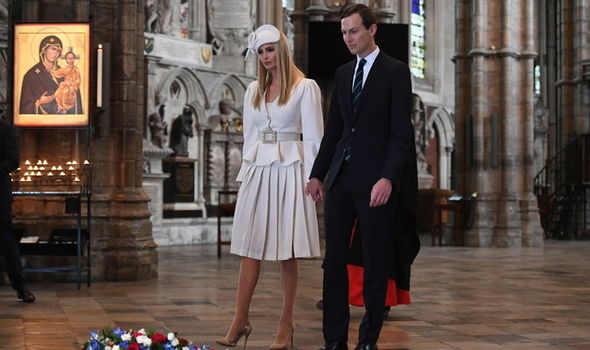 During a visit to the Netherlands yesterday, US Secretary of State Mike Pompeo said the current trade terms between the EU and US are “not fair”.

Asked whether Mr Trump’s description of the EU as a “foe” still stands, Mr Pompeo said: “I think what President Trump meant was there are places where the United States economy hasn’t been treated fairly.”

“No-one would think you would set up a trade regime that would permit that to continue to happen, to have unequal tariffs.”

In London, Mr Trump met with the Queen and Theresa May as part of his official state visit to the capital.

The US President urged the outgoing Prime Minister to “stick around” during a meeting between the pair.

“I think we will have a very, very substantial trade deal,” he told Mrs May.

“This is something you want to do and my folks want to do.

“Stick around. Let’s do this deal.”