An England football fan who stole a match ticket from a German supporter was stopped by other Three Lions fans who grabbed him and gave it back.

The man, who was later arrested by police, is alleged to have pushed a German fan to the floor near the Allianz Arena in Munich, where England were playing Germany on Tuesday night.

It is claimed he grabbed the ticket off the stricken man, but was set upon by England fans before he could get away.

The group of Three Lions supporters then prised the ticket off him and returned it to the German supporter.

Police in Munich have confirmed the England fan was arrested and taken into custody as a result of the incident, which happened roughly an hour before kick-off. 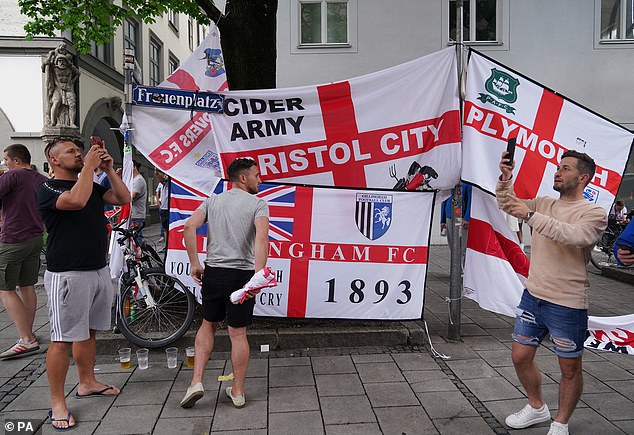 England fans put up flags in Frauenplatz square in Munich ahead of last night’s match, which finished 1-1 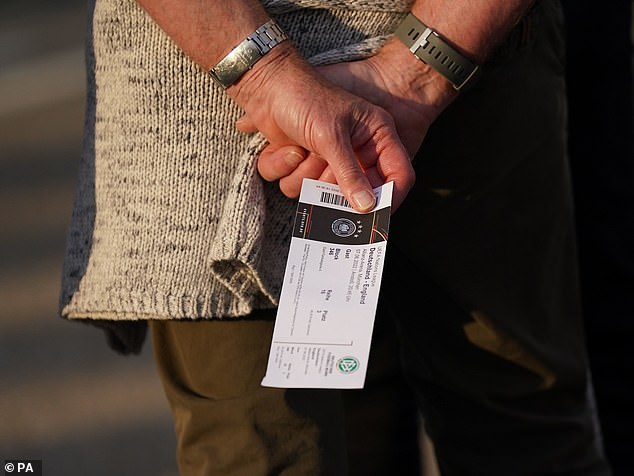 It is claimed an England supporter before the game tried to steal a ticket from a German fan, but was stopped by other Three Lions fans

He was one of six English people arrested on Tuesday, with four Germans and one American also held by police on what they described as ‘a quiet night’.

Two England fans were arrested for setting off flares at a restaurant and a train station, while a 33-year-old man was also detained for sexual harassment after allegedly touching a waitress on the bottom.

An 18-year-old was arrested for kicking a police officer, while a 40-year-old was held for verbally insulting police.

Four Germans were arrested, police said, including two who tried to get onto the football pitch.

An American national was arrested for allegedly using a drone over the stadium.

A local police spokesman told the PA news agency the total number of police incidents was lower than at a typical German top-flight football match, and he described it as ‘a successful police operation’.

A handful of England fans entered the stadium several minutes late, blaming a lack of signage at the nearest train station which meant they ended up joining the wrong queue before being redirected to the ‘away end’ gate, more than a mile’s walk around the perimeter.

The match itself saw England draw 1-1 with their hosts, as Harry Kane’s late penalty levelled the scores after Jonas Hofmann’s opener for the Germans.

The day before the match was marred by ugly scenes which saw three England fans arrested for allegedly making Nazi salutes – an action which is against the law in Germany. 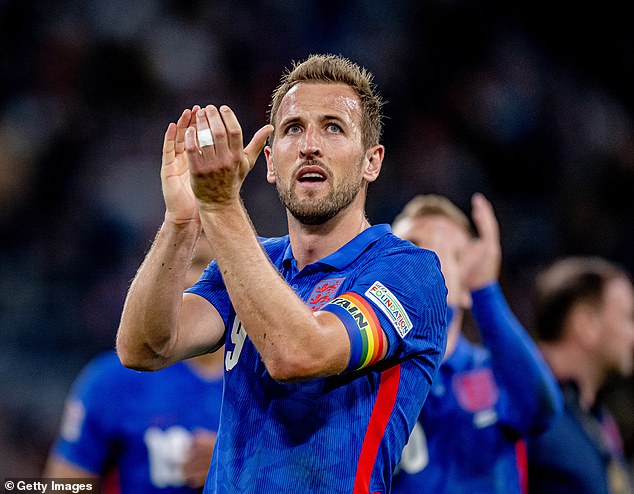 A total of eight England fans were arrested on Monday, as thousands of supporters flocked to the Bavarian city ahead of the game.

Video emerged showing one group of England fans singing ’10 German Bombers’ despite the pleas of national team manager Gareth Southgate for them not to.

Another fan caused £1,700 worth of damage after he let off a flare inside his hotel room, while four others were arrested for incidents including insulting police officers and urinating in the street.

Many of the troublemakers were dealt with by being ordered to pay a security deposit of around £170 – the local equivalent of an on-the-spot fine – while two who were unable to pay the money were brought before a district judge. 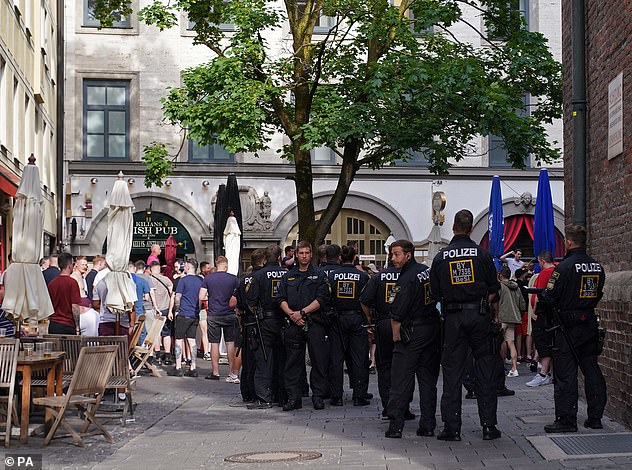 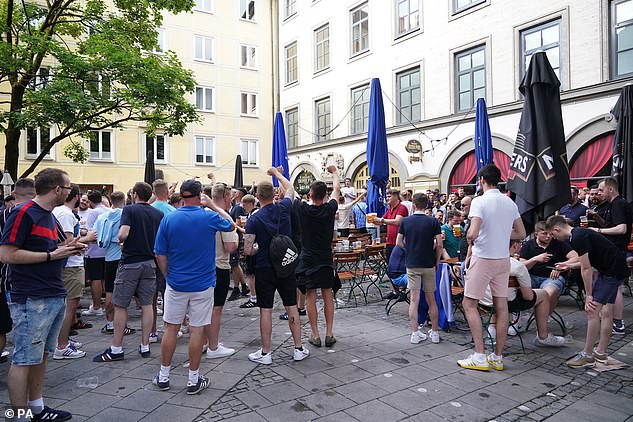 England football fans gather outside Kilians Irish Pub in Frauenplatz square. There’s no suggestion the people pictured are guilty of any wrongdoing

Some bars in the city closed early yesterday after being overwhelmed by the number of fans, while other pubs did not open at all today after reports of incidents getting out of hand among some supporters.

Police were called to one ‘brawl’ yesterday, reported to have involved 30 to 50 England fans, but said it had dispersed by the time armed officers arrived on the scene.

A Munich police spokesman said police would only be able to stop England fans going in the ‘home’ end if there was an expectation they may cause trouble.

He said that 700 officers – including riot police – had been deployed to deal with the influx of England fans to the city since Saturday, considerably more than would be working for a Bayern Munich football match.

It follows a plea from England manager Gareth Southgate for fans to behave to repair their damaged reputation, particularly in light of the unsavoury scenes at Wembley during the Euro 2020 final.

Three Lions supporters in Munich have said the overwhelming majority of fans want to ‘fix’ their ‘pretty poor reputation’ internationally, particularly in light of the unsavoury scenes at Wembley during the Euro 2020 final.

And they said England fans have been turning on troublemakers in an effort to clean up their image at international football matches, including condemning offensive chanting.

Adam Carr, a 21-year-old England fan who supports his hometown team Liverpool, said: ‘I noticed people were chanting the songs we’re not supposed to chant about Germany, and instantly they were told by other England fans to shut up.

‘It feels like everyone knows the spotlight’s on us, especially after the Euros. Everyone’s just trying extra hard. In the past with England away days there was a lot of trouble.

‘For the younger generation we want to be able to go to cities and go into places and people greet us with a friendly face rather than being ”Oh god, it’s the English”. That’s what we don’t want any more.’