The iconic Big Ben clock has been restored to its former glory by a group of expert mechanics working in secret out of a converted cow shed in the Lake District.

For almost four years, the Cumbria Clock Company, in Dacre, near Penrith, has been putting the Victorian masterpiece back together while protecting it from public view.

The famous London landmark had to be removed from its home at Parliament’s Elizabeth Tower in 2017 when extensive refurbishment work began at a cost of at least £80 million.

Teams across the UK – including the Cumbria Clock Company – were involved in reviving the much-adored timepiece and bringing back its signature ‘bong’, which first rang out around London in 1923.

The task has been particularly painstaking given that neither the original designer, Edmund Beckett Denison, nor installer, Edward John Dent, kept detailed records of how it was constructed. 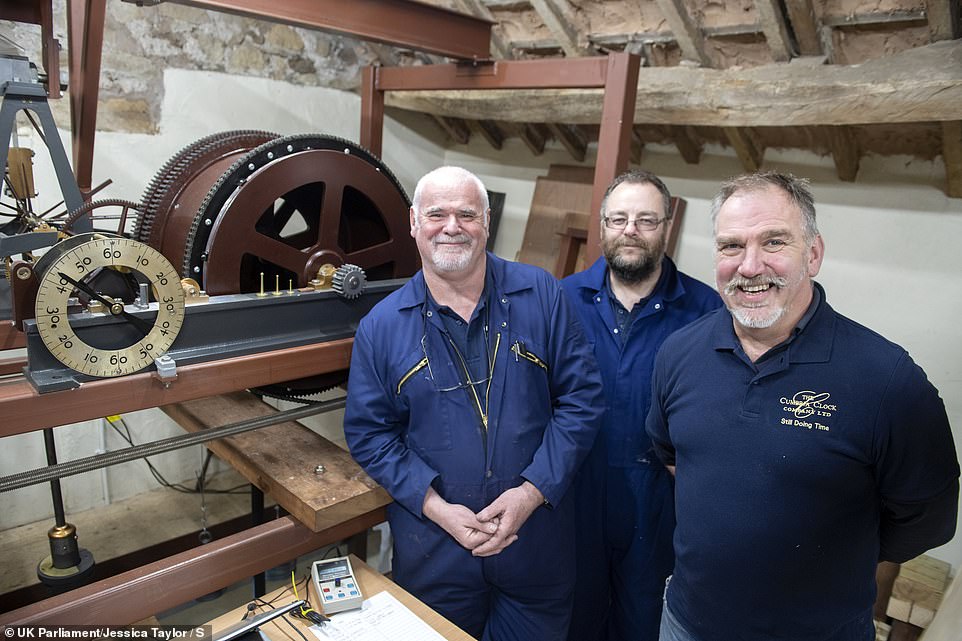 The Cumbria Clock Company, working with Parliament’s clock mechanics, reinstalled the Great Clock after taking it away from Westminster and painstakingly cleaning, repairing and restoring more than 1,000 components – including wheels, pinions, bell-hammers and bearings – at its workshop in the village of Dacre near Penrith in the Lake District 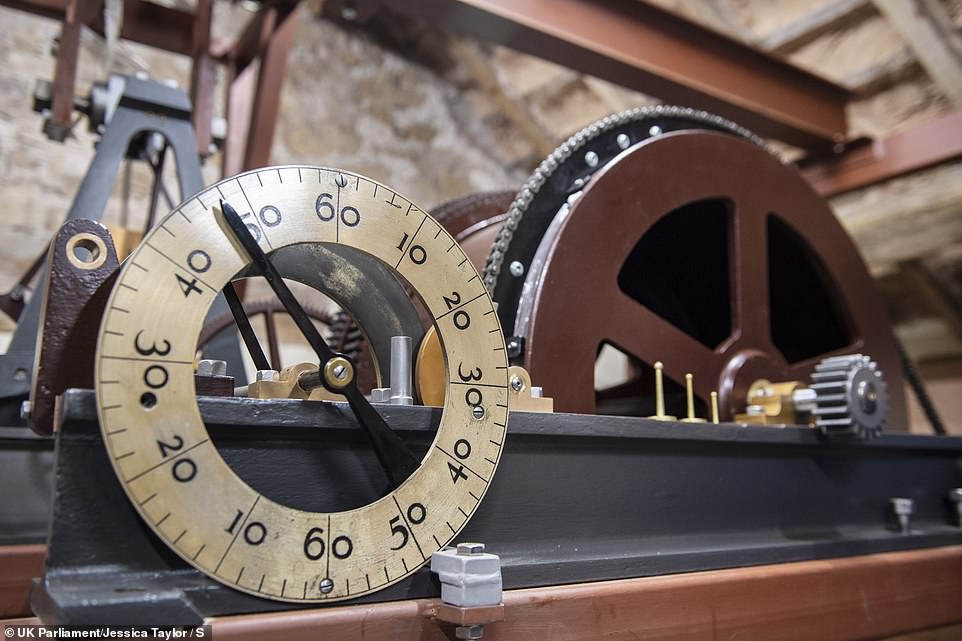 The famous London landmark has not ‘bonged’ since 2017, when extensive refurbishment work began at a cost of at least £80 million (Pictured: Big Ben’s clock during repair works at the Cumbria Clock Company) 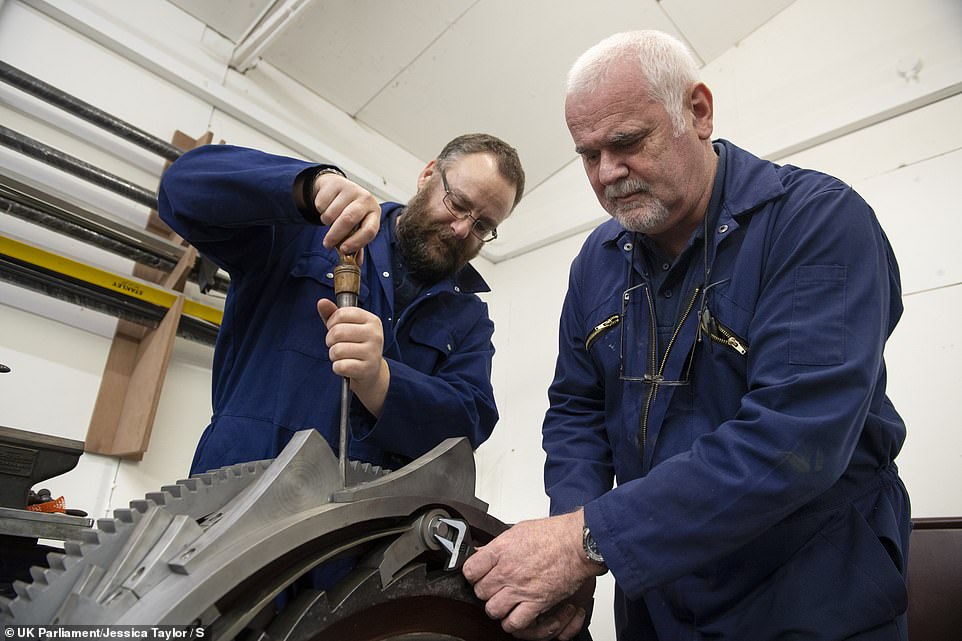 Since 2017, the famous London landmark has been silent as the extensive refurbishment work began on its home at Elizabeth Tower at a cost of at least £80 million 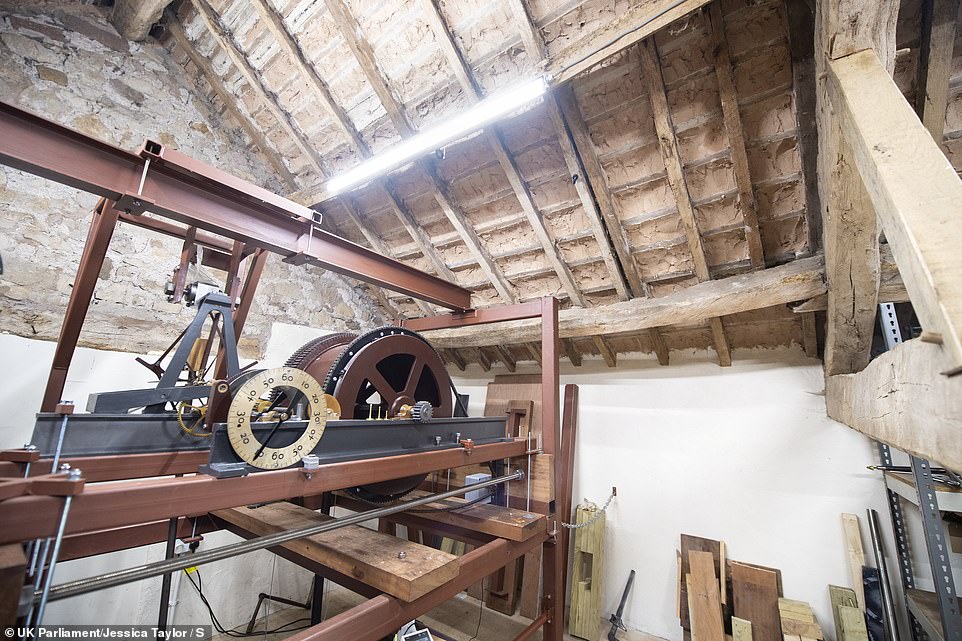 The task has been particularly painstaking given that neither the original designer, Edmund Beckett Denison, nor installer, Edward John Dent, kept detailed records of how it was constructed (Pictured: Big Ben’s clock during repair works at the Cumbria Clock Company) 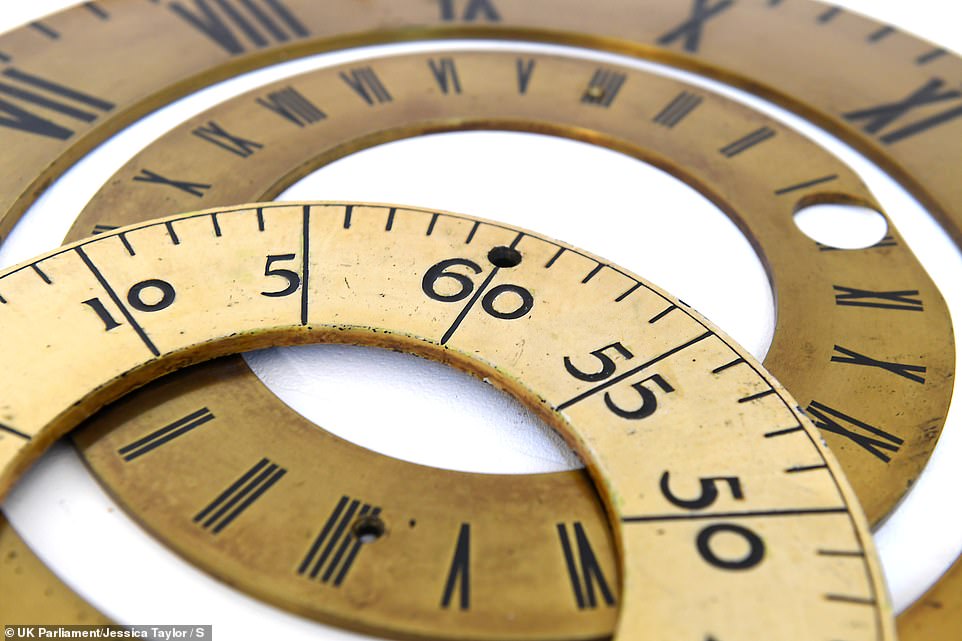 The original intricate clock features of Big Ben, which were transported to a clock company in a village in the Lake District for repairs 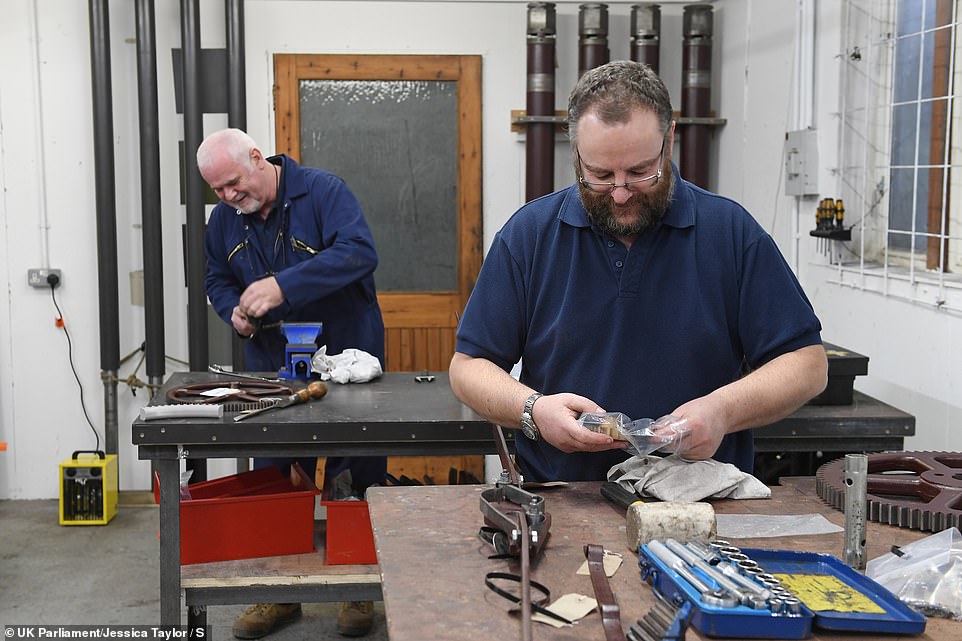 Two workers at the Cumbria Clock Company unpack some of the more than 1,000 components which make up Big Ben’s iconic clock 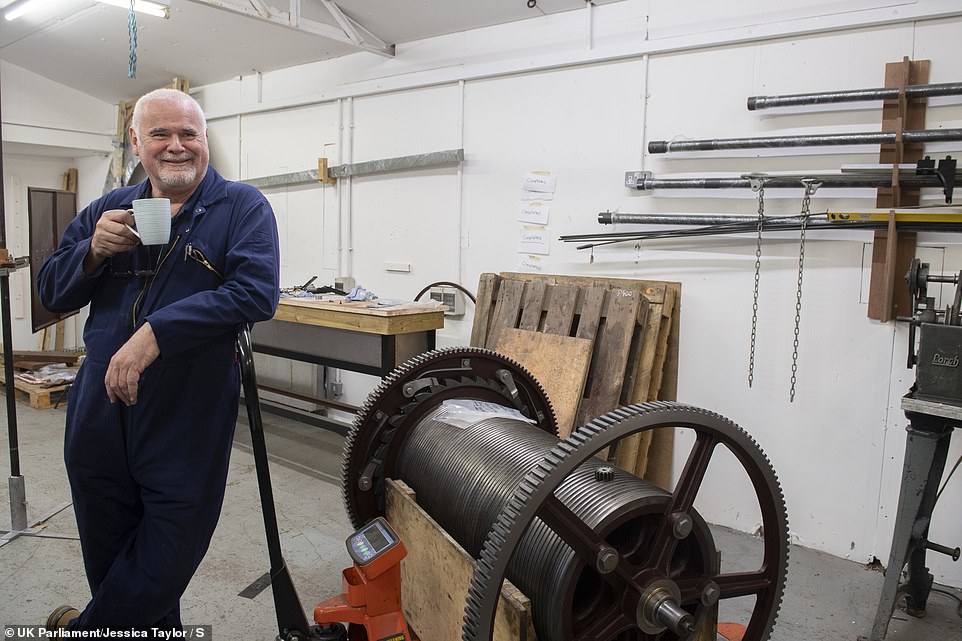 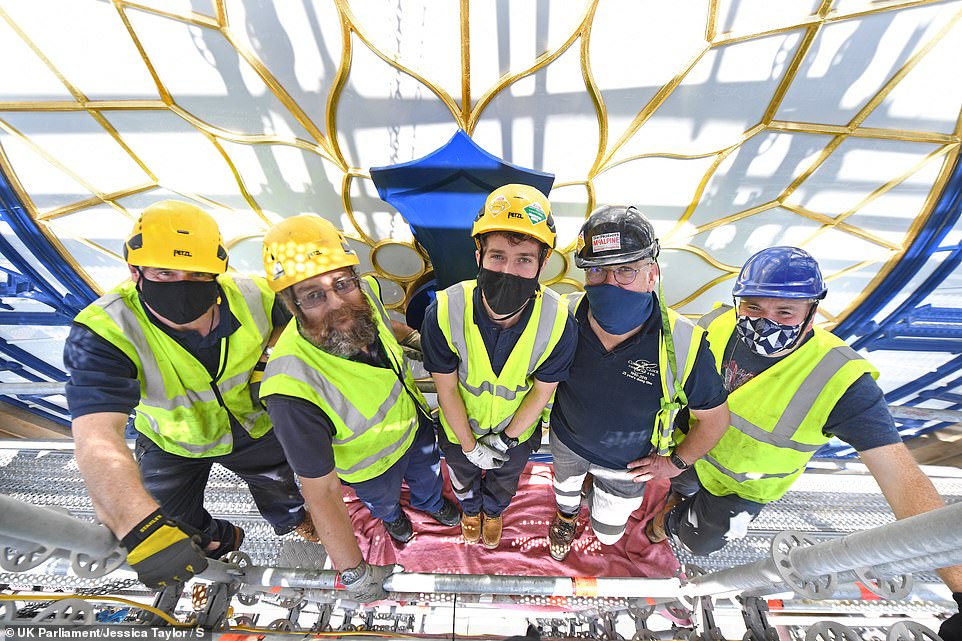 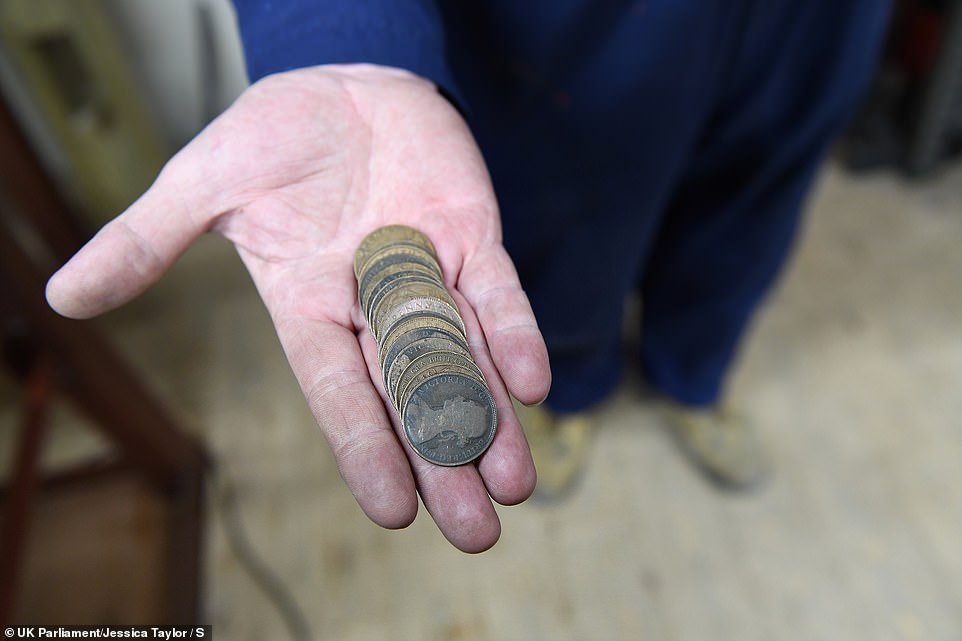 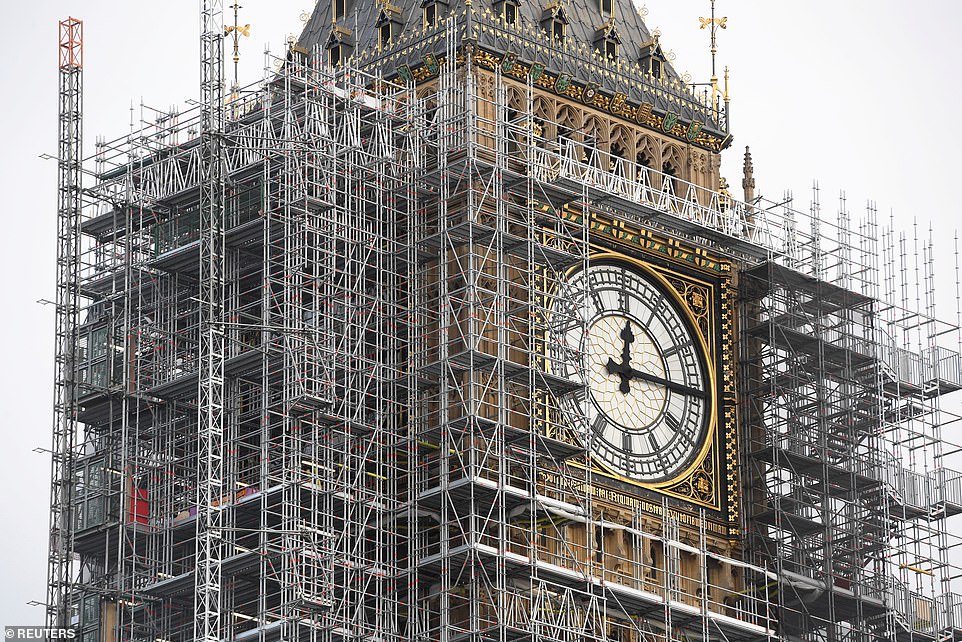 The Elizabeth Tower, housing the Big Ben bell, is seen clad in scalffolding, over the Houses of Parliament, in central London in 2017

After the Palace of Westminster was destroyed by a fire in 1834 those in charge of planning the new building decided to create a tower and clock.

The bell necessary for the giant clock had to be large, and John Warner and Sons at Stockton-on-Tees’ first attempt cracked irreparably.

in 1858 the metal was melted down and the bell recast in Whitechapel.

It first rang across Westminster on May 31, 1859 but just months later cracked again.

A lighter hammer had to be fitted and the bell was turned around so an undamaged section could be rung.

The origin of the name Big Ben is not known, although two different theories exist.

The first is that is was named after Sir Benjamin Hall, the first commissioner of works, a large man who was known affectionately in the house as ‘Big Ben’.

The second theory is that it was named after a heavyweight boxing champion at that time, Benjamin Caunt.

Also known as ‘Big Ben’, this nickname was commonly bestowed in society to anything that was the heaviest in its class.

Big Ben’s timekeeping is strictly regulated by a stack of coins placed on the huge pendulum.

Before 2009, timekeepers kept 10 old pennies beside the mechanism, using the coins to keep the clock accurate. It now also used special £5 coins created especially for the 2012 Olympics.

Adding or taking away coins affects the pendulum’s centre of mass and the rate at which it swings, Mike McCann, the clock’s keeper told Reuters news service at the time.

The clock has rarely stopped – even after a bomb destroyed the Commons chamber during the Second World War, the clock tower survived and Big Ben continued to strike the hours.

The chimes of Big Ben were first broadcast by the BBC on December 31 1923, a tradition that continues to this day.

Despite this, the Cumbria company’s specialist engineers were able to complete the delicate task of ‘reinstalling the Great Clock’.

It meant they had to take thousands of clock components from London to their workshop.

It was the first time that the entire mechanism had been removed from Elizabeth Tower.

Since 2017, the company, which specialises in historic turret clocks, has taken scores of photos, notes and drawings to help complete the complex task – and as a result has produced the first user manual and set of engineering diagrams of the mechanism for the benefit of future clock keepers.

He said: ‘It was a once in a lifetime opportunity to work on the best-known clock in the world.’

Mr Scobie-Youngs added: ‘We were able to assemble the time side, the heart-beat, and put that on test in our workshop, so for two years, we had that heartbeat ticking away in our test room, which was incredibly satisfying.

‘It became part of the family, and its departure has been like a child leaving home.

‘The beauty of a clock like this is that you as a clockmaker become part of its history and want to leave it in a better place than you found it, so the next clockmaker can appreciate it.

‘We were privileged to become part of the story of Big Ben – everyone at the company feels that attachment to the story.’

The mechanism was removed to protect it from the dust and debris created by the restoration works on Elizabeth Tower.

But Mr Scobie-Youngs said the company’s 22-strong team also used modern conservation techniques to ensure that it remains ‘the most accurate public clock in the world’.

He said: ‘It’s a precision instrument that we expect to keep within one second of the first blow of every hour – that’s a big ask for a mechanical movement made and installed in 1859.

‘I think Edward John Dent would be pleased as punch that the clock that he made is still doing the job that he designed it to do 160 years later.’

The Cumbria Clock Company first worked on Big Ben in 2007 when it installed a temporary drive mechanism to keep the dials on time.

In 2018, the company built a mechanism to toll the bell – the same mechanism that will be used on New Year’s Eve 2021.

It is expected that Big Ben will be gradually unwrapped over the coming months, with the hope that the iconic London landmark will bong again on a regular basis in early 2022.

It comes after repair work suffered a major setback in February this year after estimated costs soared by more than £18million to almost £80million.

It also emerged specialist timekeepers on site could not repair the historic Elizabeth Tower clock.

The revelations threatened to plunge the project, which had already doubled in cost, into crisis.

The House of Commons Commission said it needed another £18.6million to repair the clock, bell and tower, taking the total to £79.7million.

It blamed the discovery of extensive Second World War bomb damage, pollution and asbestos in the Elizabeth Tower for the price increase.

The body led by the Speaker Sir Lindsay Hoyle said that the tower was in worse condition than realised when the last estimate of £61.1million was made two years ago – more than double the original cost of £29million.

The commission said at the time it still expected work to be finished by the end of this year – but the completion date was later pushed back by at least six months.

The full scale of the conservation was only revealed once the project team was able to begin intrusive surveys for the first time on the 177-year-old structure, the Commission said.

The last extensive conservation work on the UNESCO World Heritage site was completed between 1983 and 1985.

The tower was designed by architects Charles Barry and Augstus Wellby Pugin.

An important part of the tower’s restoration is to improve fire prevention standards.

Parliament’s team of clock mechanics temporarily disconnected Big Ben and the quarter bells from the clock mechanism and lowered the weights to the base of the tower in order to provide a safe environment for the people working in the Elizabeth Tower.

A bespoke electric mechanism was built to power the 200kg striking hammer which allowed the bell to sound on New Year’s Eve and Remembrance Sunday.