Democratic donor Ed Buck is officially a suspect in the deaths of two men in his apartment from methamphetamine overdoses, his bail documents reveal.

The West Hollywood donor, who has contributed thousands to both local Democrats and Hillary Clinton’s presidential campaign, was arrested on Tuesday after a third man narrowly escaped death when he overdosed in his apartment.

The 65-year-old was charged on Tuesday night with battery causing serious injury, administering methamphetamine and maintaining a drug house.

The Los Angeles District Attorney wrote in a memo to a judge requesting $4 million bail that Buck is ‘a violent, dangerous sexual predator’ and his ‘aggressive and malevolent behavior led to the death of two men in Buck’s apartment.’

The memo confirms that Buck ‘is not only facing the current filed charges, but he is also still a suspect in the deaths of Gemmel Moore and Timothy Dean’. 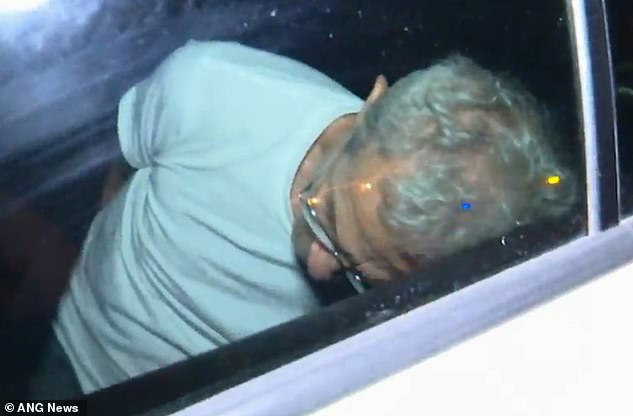 Ed Buck, 65, is seen in the back of a police cruiser after he was arrested at his West Hollywood home on Tuesday evening 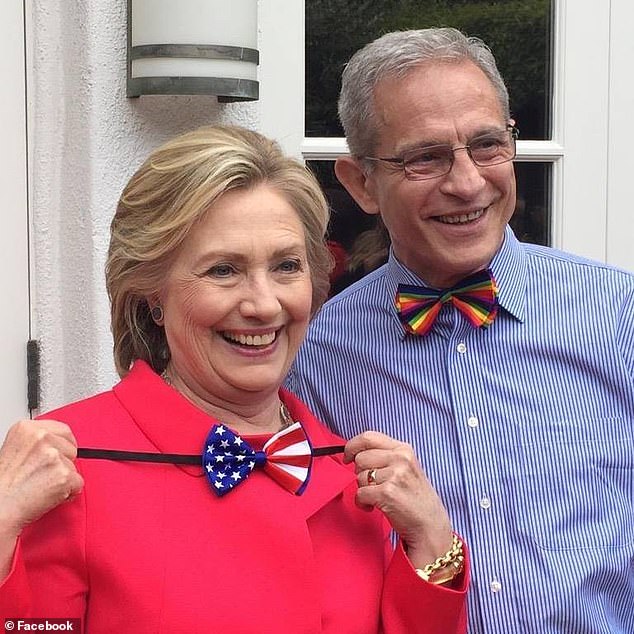 Buck is allegedly ‘a violent, dangerous sexual predator’ who offered drugs, money and shelter to mainly addicted and homeless men in exchange for participating in sexual fetishes, including administering dangerous drug doses. He is seen above with Hillary Clinton in 2015

His arrest warrant is signed by an officer in the LAPD’s homicide squad.

Prosecutors allege Buck provided the meth that killed two men who were found in his apartment in 2017 and this January. Gemmel Moore, 26, died in 2017 while Timothy Dean, 55, died early this year.

In the scathing bail memo, the prosecutor wrote that the Democrat donor ‘manipulates his victims into participating in his sexual fetishes’, which include ‘supplying and personally administering dangerously large doses of narcotics to his victims.’

‘Not deterred by the senseless deaths of Moore and Dean… the defendant nearly killed a third victim last wee,’ the memo claims.

‘The defendant’s predatory acts and conscious disregard for human life must be stopped.’

Los Angeles County sheriff’s deputies were spotted outside Buck’s apartment building on Wednesday following his arrest the day prior.

Prosecutors said that Buck injected methamphetamine into a 37-year-old man identified as Joe Doe, who overdosed but survived after fleeing the apartment, earlier this month.

At one point, Buck tried to stop the man from getting help, they said.

The man is alleged to have returned to Buck’s apartment a week later on September 11.

Prosecutors allege Buck thwarted the man’s attempts to get help, but he managed to escape to a nearby gas station, where he called for help.

The man was rushed to hospital and treated. 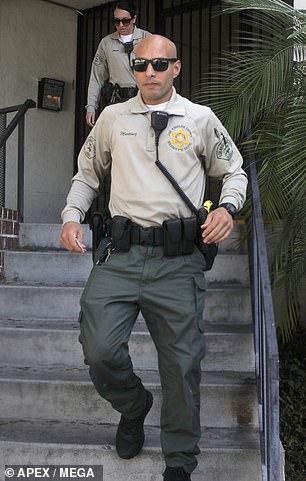 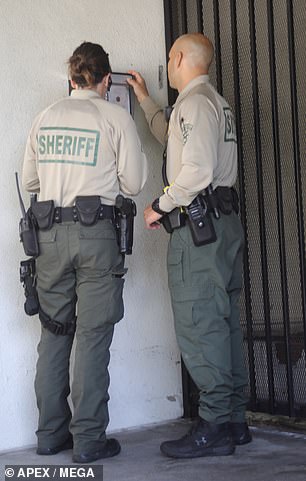 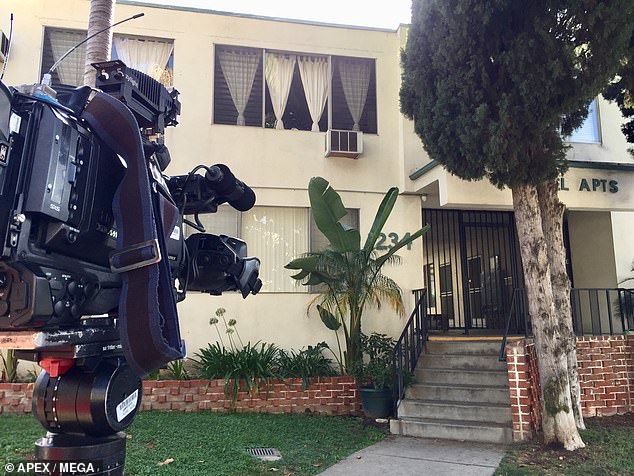 Investigators conducting a search in Buck’s home found hundreds of photographs of men in compromising positions.

‘The full scope of his consistent malicious behavior is unknown,’ prosecutors said.

‘It is only a matter of time before another one of these vulnerable young men dies of an overdose.’

Buck made headlines earlier this year after a man was found dead at his West Hollywood apartment on January 7, less than two years after another man died there.

Both men were African-American. Buck is white.

Following the second death, Buck’s attorney, Seymour Amster, told the Los Angeles Times in an article published in March that his client had a ‘heart of gold’ and brought troubled people into his home to offer them help.

U.S. Representative Karen Bass, a Democrat from California, said in a statement that Buck’s arrest was ‘too little, too late’ because nothing was done in the immediate aftermath of the deaths of two black men at his home.

‘The inaction in response had a message that was loud and clear: Black gay lives obviously didn’t matter,’ Bass said.

Buck, if convicted of the charges against him, faces a possible maximum sentence of five years and eight months in state prison. 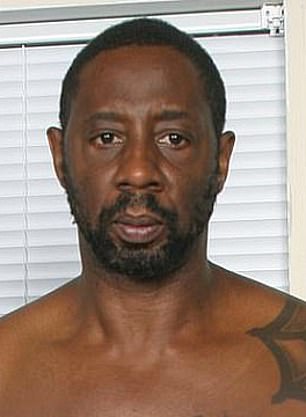 Gemmel Moore, 26, (left) was found dead of a methamphetamine overdose in July 2017 and Timothy Dean, 55, (right) was also found dead of an overdose at Buck’s apartment 18 months later 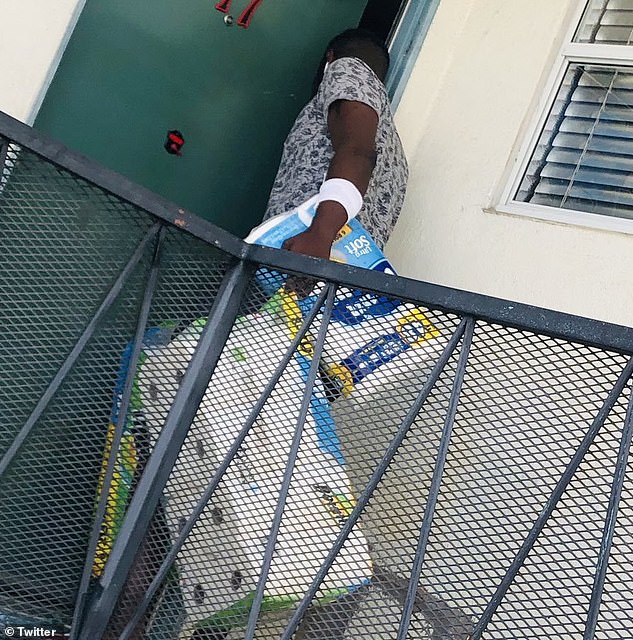 Buck was visited by a young black man at his West Hollywood apartment earlier this month. It is unclear if the man pictured is the same individual who suffered an overdose at his apartment last Wednesday

Authorities have denied accusations that Buck’s political activities played a role in their decision not to arrest him.

They also denied that Buck’s race and the fact that his alleged victims were black also contributed to his remaining a free man.

Buck has donated tens of thousands of dollars to campaigns of California candidates, including Gov. Gavin Newsom.

He has also given to Democrats including Hillary Clinton, Barack Obama, Los Angeles Mayor Eric Garcetti and many others.

He has been photographed with Clinton and former California Governor Jerry Brown.

The 64-year-old became a successful businessman, pioneering in computer technology, specifically in electronic information services, in Arizona before moving to Los Angeles.

A one-time registered Republican, Buck began getting involved in Southern California politics in the early 1990s.

In 2007, Buck waged an unsuccessful campaign to be elected to the West Hollywood City Council.

A photograph emerged of a young black man with what appears to be a bandage on his arm and carrying bundles of paper towels entering Buck’s apartment.

It is unclear if the man is individual who suffered an overdose last Wednesday.