A Dutch birdwatcher held by Islamic State-linked militants was killed Friday during a firefight between his kidnappers and soldiers in the southern Philippines, according to the military, which said he was shot by his captors as he tried to escape.

Ewold Horn had been held since 2012 by the Abu Sayyaf kidnap-for-ransom group and was fatally wounded as soldiers fought a 90-minute gun battle with the jihadists on their stronghold, Jolo island.

The Dutch foreign ministry confirmed Horn died in an ‘exchange of fire’, adding that it was investigating the exact circumstances of his death. 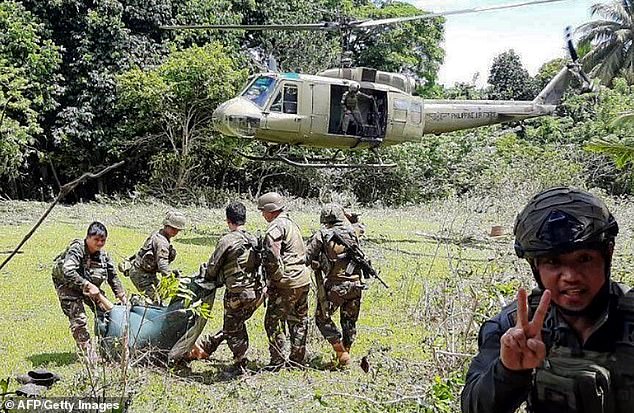 Soldiers prepare to evacuate wounded and dead bodies as pursuit operations continue in Patikul of the province of Sulu, after the fight between soldiers and kidnappers of IS-linked militant Ewold Horn

Philippine Brigadier General Divino Rey Pabayo said in a statement that ‘Horn was shot by one of his guards when he tried to escape from the Abu Sayyaf during this morning’s gunfight’.

The southern Philippines is home to numerous armed groups, several of which are linked to the decades-old insurgency aiming to create a Muslim homeland in the Christian-majority nation’s deep south.

Horn was on an expedition to photograph rare birds on the remote Tawi-Tawi island group in the southern Philippines when he was abducted by unknown gunmen and turned over to the Abu Sayyaf. 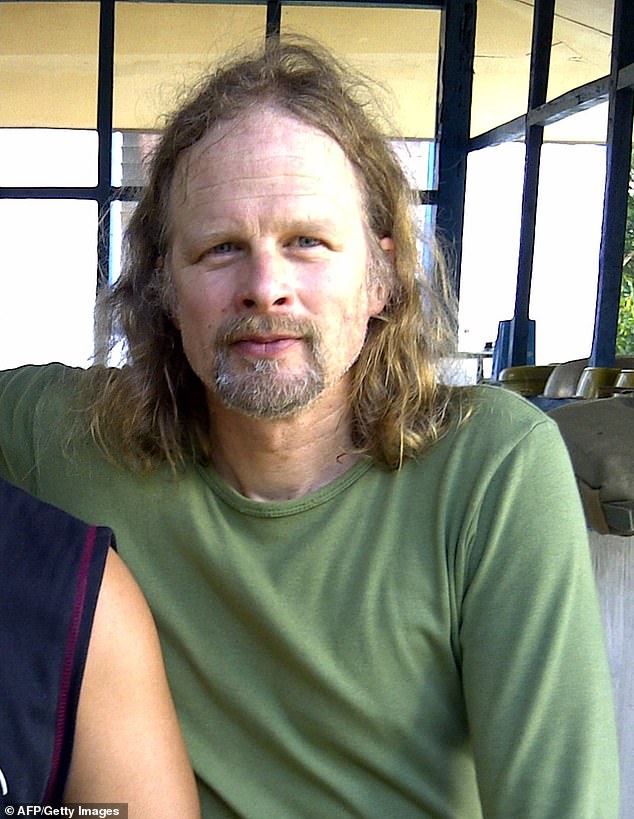 Horn was seized along with Lorenzo Vinciguerra, a Swiss national who managed to escape in 2014 during a gunbattle between soldiers and his captors.

‘We express our deep condolences to Mr Horn’s family and loved ones,’ Philippine President Rodrigo Duterte’s spokesman Salvador Panelo said in a statement.

‘We vow to pursue his killers to the ends of the earth until they are brought to justice.’ 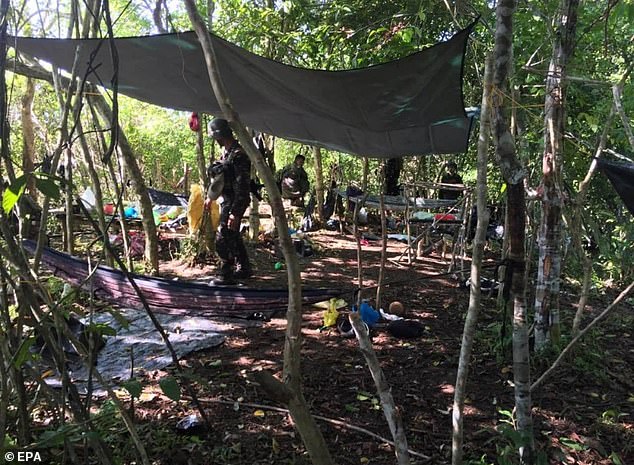 A handout photo made available 31 May 2019 by the Armed Forces of the Philippines – Joint Task Force Sulu shows Filipino soldiers inspecting a temporary shelter, where Ewold Horn, a Dutch photographer, was held hostage by Islamic State-linked Abu Sayyaf group militants

Abu Sayyaf has been blamed for some of the worst terror attacks in Philippine history, including repeated kidnappings of foreigners, who are often held for huge ransoms.

Philippine officials assert the group was behind the deadly January bombing of a Catholic cathedral on Jolo island during Sunday mass that was the worst attack to hit the nation in years.

The bombing was claimed by the Islamic State, which has worked to maintain a presence in the Philippines as its caliphate crumbled in the Middle East.

Abu Sayyaf was active in the Philippines years before linking up with Islamic State, and has supported its violent activities with kidnapping. 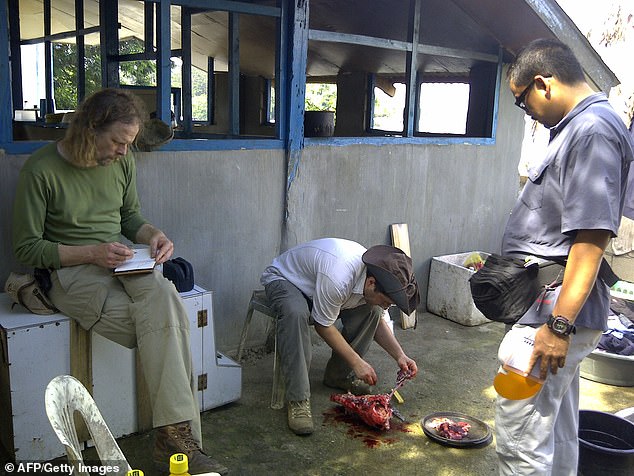 The group has held hostages over the course of years as it negotiated ransoms, but has also shown a willingness to kill its captives.

Two Canadian hostages kidnapped from yachts moored at a marina on a tourist island in the southern Philippines were also beheaded in 2016 after demands for ransoms of similar amounts went unfulfilled.

The military said Friday that the group was believed to hold at least two Filipinos and a Vietnamese national, but it could not be sure they were still alive.

It added that a woman named Mingayan Sahiron, which the army identified as the second wife of a top Abu Sayyaf leader, was also killed in Friday’s gunbattle.