BMW driver, 28, who sparked ‘anarchy’ when he mowed down five birthday party guests ‘like skittles’ after brawl at five-star hotel spilled out onto London street is jailed for five years

A BMW 4×4 driver who mowed down five birthday party guests ‘like skittles’ outside a five-star hotel has been jailed for five years.

Prince Atuahene, 28, careered over the pavement and ploughed into the crowd outside the Hotel Rafayel in Battersea, southwest London.

One of the victims, Ahmed Askouri, was carried on the bonnet of Atuahene’s BMW X5 for five metres before he was thrown clear.

He ended up trapped under wooden fencing and suffered a broken leg, Isleworth Crown Court heard.

Atuahene was granted bail following the attack on July 13, 2019, and went on to rob a postman of a package containing a credit card seven months later. 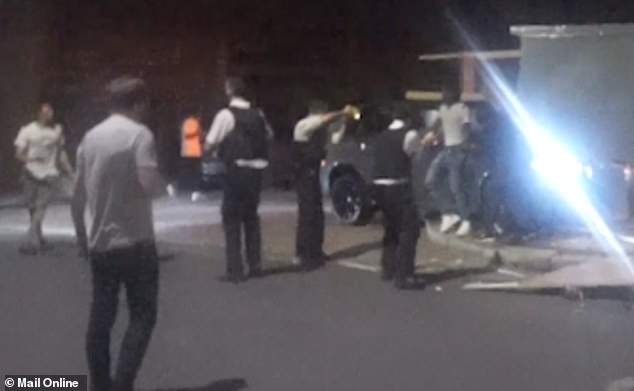 A shocking video of the scene shows police officers pointing their Tasers at hooded men and screaming at them to ‘get on the f***ing ground!’ 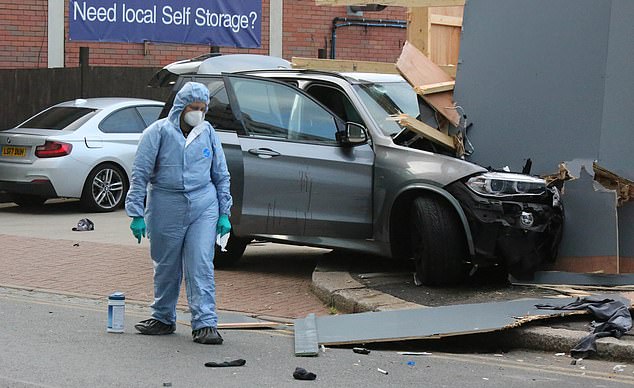 Bill McGivern, prosecuting, said Atuahene and others, including his cousin Wilkes, had attended the party at the Hotel Rafayel.

Another group, including Mr Askouri and Chrison Bell, also came to the event and a brawl erupted, the court heard. A fight spilled out onto Holman Road and Mr Kirby was left with a broken jaw after he was kicked in the face as he sat in his cousin’s BMW.

Mr Wilkes was heard to yell ‘Suck ya mum’ shortly before he was assaulted, the court heard. 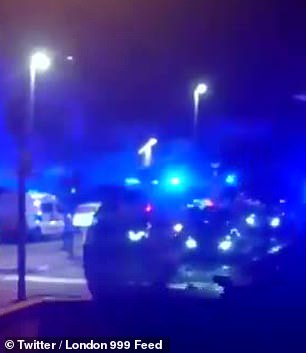 The BMW was abandoned after the collision

Atuahene drove away, performed a U-turn and accelerated back down the road. He mounted the kerb and crashed into five men, including Mr Adeh and Mr Askouri.

The men were all thrown into the air and left lying on the pavement.

Mr McGivern said a local resident ‘saw one male hit by the car and go cartwheeling in the air and come to land by the hoarding.

‘The other looked like skittles the way they had been struck.’

Mr Askouri was thrown from the bonnet of the X5 and ended up trapped under hoardings lining a building site, until police lifted them off. His right leg was broken.

Mr Bell was taken to Kings College Hospital where he was found to have multiple facial fractures, a bleed to the brain and a 4cm cut to his forehead.

Atuahene handed himself in to Wandsworth police station accompanied by his solicitor.

In a prepared statement, he said that he was ‘trying to flee the scene out of fear for my life’ after seeing a large group of people, some of whom were carrying knives and a gun.

‘I was terrified. I wanted to leave as soon as possible,’ he said. ‘Once I got into my car I held my head down in fear of shots. I remember reversing and hitting a car behind me. I was not looking up out of fear of being shot at.

‘Before I know I have lost control of my car whilst trying to flee the scene.

‘I only recently brought the car, it is a high performance and I am still not familiar with it, the car is automatic.

‘I normally drive a manual. I didn’t intentionally drive into people, I was just scared for my life and wanted to escape safely.’ 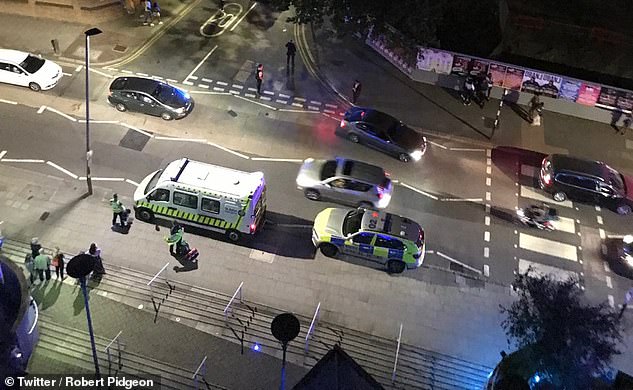 Police had earlier been called to reports of a fight at 11.15pm, and arrested five people for affray 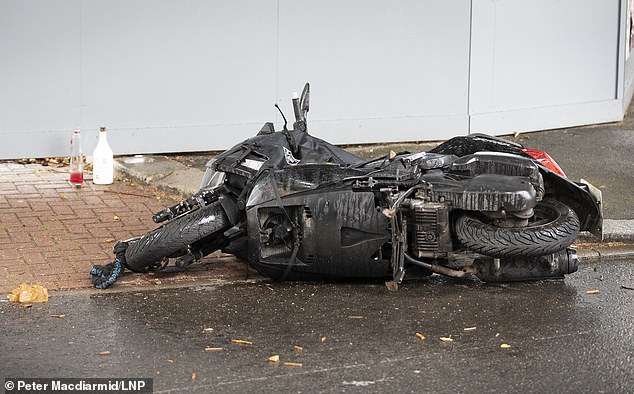 A twisted motorcycle was pictured lying on the pavement the next day. The rider is believed to have been caught up in the crash 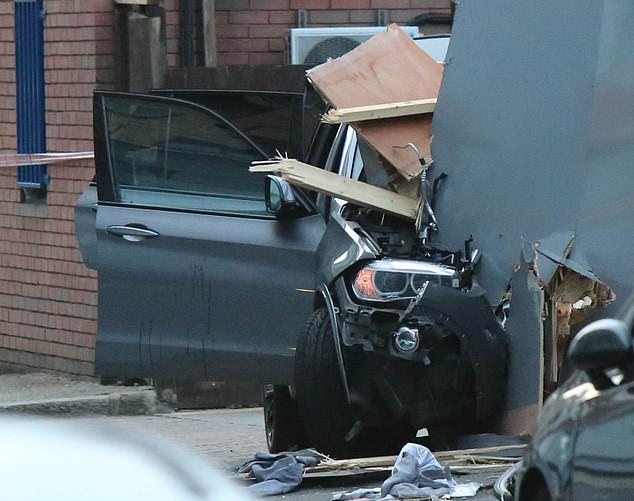 The group were driven at when they were leaving the Hotel Rafayel on Lombard Road, Battersea. One of them suffered a broken leg.

But the prosecutor insisted that Atuahene deliberately drove into the five men and knocked some of them down ‘as if they were skittles’.

‘It was a deliberate and highly reckless piece of driving,’ he said.

Atuahene was bailed after the incident and went on to rob postman Barry Mann as he did his round in a quiet cul-de-sac in Ickenham, west London, on February 26 last year.

He got out of a Vauxhall Corsa and blocked Mr Mann’s way and wrestled a package containing a credit card from him.

Atuahene made his getaway in the Corsa but the HSBC card, which had a £9,550 limit, was stopped before any money could be taken out. He admitted causing serious injury by dangerous driving, robbery and fraud.

Atuahene, from Brent, was jailed for five years and disqualified from driving for seven years.