THIS is the dramatic moment an "oil tanker" explosion sent flames shooting into the sky in a towering inferno.

The explosion at Jebel Ali Port in Dubai was heard several miles away with the glass in many buildings close by being shattered due to impact, according to reports. 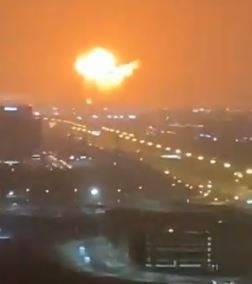 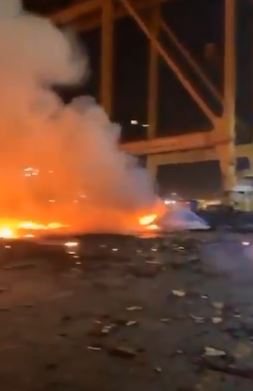 A Tweet from Dubai's state-run media office said that a fire was reported to have erupted on a ship and that a team of firefighters was working to control the blaze.

Two fire trucks and other emergency vehicles could be seen heading south of Dubai on the main road that leads to Abu Dhabi, Reuters reported.

Authorities posted a video of firefighters dousing giant shipping containers. Flames could be seen rising in the background as emergency services hosed down the area.

People in Dubai recording with their phones from their high-rises posted frantic videos on social media showing a fiery ball illuminating the night sky.

The fire has now been brought under control and no injuries have yet been reported.

DP World, which owns Jebel Ali Port, had no immediate comment when contacted.

It serves cargo from the Indian subcontinent, Africa and Asia.

The port, operated by the Dubai-based DP World, has four sprawling container terminals that can berth some of the world's largest ships.

The extent of damage caused to the port and surrounding cargo was not immediately clear.

Dubai in the United Arab Emirates is the region's trade, business and tourism hub.