Ministers may ignore future rulings from the European Court of Human Rights amid fury over its role in blocking the first Rwanda migrant flight.

Justice Secretary Dominic Raab is examining whether it will be possible to disregard last-minute injunctions from the Strasbourg court in cases already examined by British judges.

Home Secretary Priti Patel was granted permission to go ahead with the removal flight to Rwanda this week by both the High Court and Court of Appeal. The UK’s Supreme Court also refused to intervene. 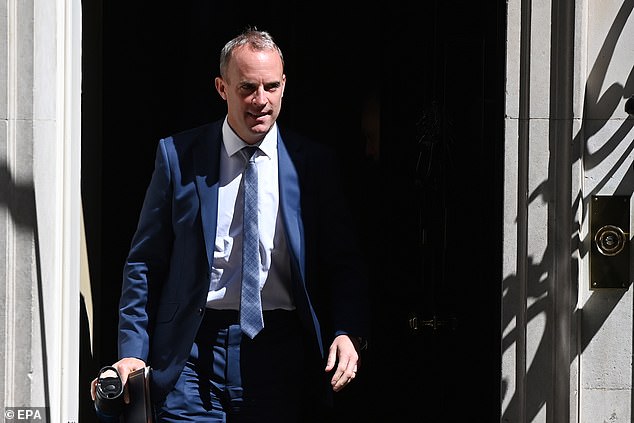 But the chartered Boeing 767 was grounded shortly before take-off on Tuesday evening following the late-night intervention by an anonymous judge at the European court.

A government source last night noted that its injunctions were ‘not binding’ and said many signatories to the European Convention on Human Rights, which the court interprets, routinely turned a blind eye to its rulings.

‘Pulling out of the ECHR completely would be a massive call, but there is scope for looking again at how we treat out-of-hours injunctions from Strasbourg,’ the source said.

‘People talk about the UK’s role in creating the court after the Second World War and that is right. But the way that charter has been interpreted in recent years has become very elastic and taken it a long way from its original aims.’

The Home Secretary yesterday said she was ‘disappointed and surprised’ by Strasbourg’s decision to overrule British courts but told MPs it was inevitable there would be legal challenges to her policy.

A Cabinet source described the ruling by the court, which is part of the Council of Europe and completely separate from the European Union, as ‘maddening’.

Miss Patel last night vowed to press ahead with the Rwanda policy – and revealed a series of further flights were in the planning stages. But it is understood that no final decision will be made on booking a new flight until the full implications of the ruling are clear.

It remains unknown whether it was broad enough to bar all migrants from being removed. The row came as:

Last night government lawyers were examining whether some migrants – such as those who do not claim to have suffered ill-treatment in their home countries – would not be covered by the ECHR injunction’s terms and could still be put on a plane to Kigali.

In an apparent reference to the campaign groups and human rights lawyers who have brought repeated legal actions, Miss Patel told MPs that ‘the usual suspects’ had set out to ‘thwart’ her plan.

It is understood a number of migrants were already aboard the Boeing jet at the Ministry of Defence air base at Boscombe Down, Wiltshire, when the flight was abandoned.

Miss Patel also condemned ‘mobs’ who staged a blockade of the A4 at Colnbrook immigration centre, near Heathrow, in an attempt to stop migrants being removed.

A string of Tory MPs yesterday called for the Government to withdraw from the ECHR entirely. Sir Desmond Swayne told Miss Patel: ‘We are going to have to grasp the nettle and extend the provision of taking back control to the ECHR.’

Rother Valley’s Alexander Stafford urged the Home Secretary to press ahead with the policy ‘despite this despicable ruling from the foreign European Court of Justice’.

Stoke MP Jonathan Gullis said: ‘The ECHR has no place in the UK judicial system. The Government needs to free itself from it entirely.’

According to the European Implementation Network, which monitors the effectiveness of the court, almost half of its judgments over the past decade have not been complied with by members. The UK is one of the top performers, complying with 80 per cent of rulings, compared with 72 per cent for France, 63 per cent for Germany and 39 per cent for Spain.

Russia has implemented only 10 per cent of the court’s rulings while Azerbaijan is on just 3 per cent.

There were signs yesterday that a full withdrawal from the ECHR would split the Tory party but Downing Street left the door open, saying ‘all options are on the table’.

And Mrs Braverman said: ‘We are considering our response in relation to that decision, but more broadly we are definitely open to assessing all options available as to what our relationship should be going forward with the ECHR.’

However pensions minister Guy Opperman said that leaving the ECHR was ‘not policy’ and ‘not something I will be advocating for’. 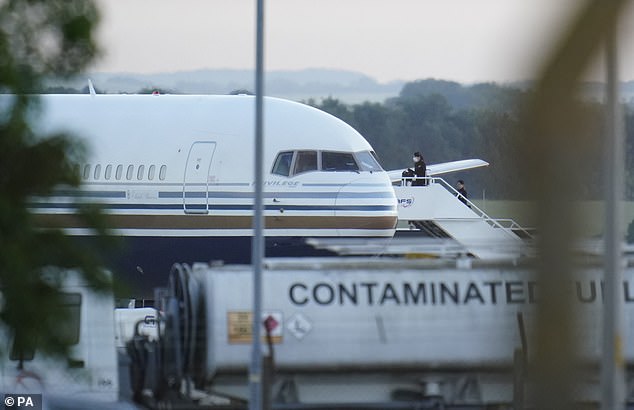 A Boeing 767 aircraft at MoD Boscombe Down, near Salisbury, which is believed to be the plane set to take asylum seekers from the UK to Rwanda before being grounded on Tuesday

Former justice secretary Robert Buckland added: ‘I don’t think it’s right for us, as a party, to abandon our historic commitments to the European convention. It was British Conservative lawyers who wrote it after the war.’

Government sources expressed deep concern that authorities at Strasbourg had yet to reveal which judge ruled on the case. The court is one of the few European institutions to retain links with Russia, despite its pariah status in the wake of Vladimir Putin’s bloody Ukraine war.

Moscow’s representative on the judicial panel, Mikhail Lobov, is understood to still be hearing cases at the court.

The Court of Appeal yesterday issued injunctions barring the removal of three migrants in the wake of the Strasbourg case. The legality of the Rwanda deal will be decided by a full judicial review expected next month.