The victim was walking along the street in affluent Chelsea at 8pm on Tuesday, near the famous home of the Chelsea Pensioners.

He appeared to be looking down at a mobile phone with the two attackers trailing in his wake.

One of the men reached out and grabbed him by the shoulder before slamming him into a wall as the other piled in.

The elderly man tried to fight back against his assailants but was violently overpowered and forced to the ground. 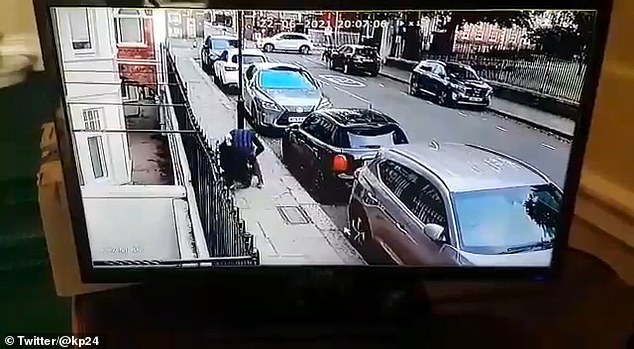 The thugs then appeared to rifle through the man’s pockets as he struggled on the ground before fleeing.

The identities of the thugs or their victim have not yet been revealed.

One of the attackers was wearing a facemask, though the other wasn’t.

TV host Piers Morgan then also shared the shocking footage, writing: ‘Absolutely disgusting. If you know who these scum are, contact @metpoliceuk ASAP.’