A Spanish waitress turned the tables on a difficult customer by charging him extra for ‘touching your testicles’ – a Spanish phrase for annoying behaviour.

The server at a Basque Country bar even added the phrase as an item on the customer’s bill, charging him 10 euros.

The extra charge almost doubled the bill from €12.50 for a round of drinks to a more considerable €22.50. 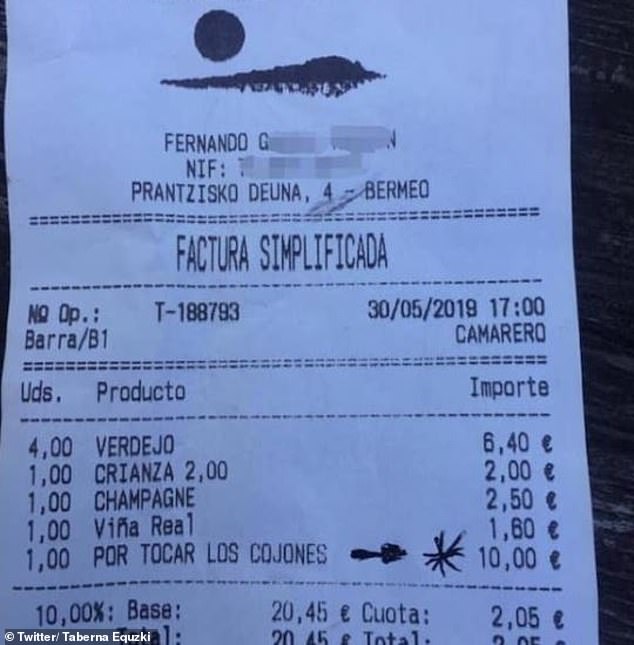 Extra charge: The phrase ‘por tocar los cojones’ – literally meaning ‘for touching your testicles’ but used as a term for annoying behaviour – was added to this customer’s bill in Spain

The waitress, Anka Paduriano, told La Sexta that the irritating customer had indeed paid up.

It later emerged that the group of drinkers at the Taberna Equzki in Bermeo were friends of the tavern’s own boss.

Ms Paduriano had hatched the idea of the extra charge as a prank on her boss’s drinking partners.

‘We are a bit mischievous, we like to play jokes,’ she said.

According to the bill, the customers also drank four glasses of Verdejo white wine, one Crianza red wine, a Vina Real and a €2,50 glass of champagne.

The bill was shared on social media and has been widely shared online.

The phrase ‘tocar los cojones’ literally means ‘touching the testicles’ but is used idiomatically to refer to irritating behaviour.

The Spanish word ‘cojones’ has also long since entered the English lexicon to mean guts or courage.

As defined by the Merriam-Webster dictionary, it is a slang term for ‘fortitude’, ‘strength’ or a ‘power of endurance or control’.