Home Office sources have blasted ‘irresponsible’ Labour MP Diane Abbott for stoking ‘tensions’ after linking the shooting of Sasha Johnson to Black Lives Matter activism – despite police stressing there is no such evidence.

Ms Abbott, 67, had associated the shooting of Ms Johnson, 27, to her activism in a post on Twitter, despite earlier Met Police statements that reiterated it was not a targeted attack.

Speaking today, a Home Office source said of Ms Abbott’s comments: ‘It is very irresponsible and risks increasing tensions in the community.’

The Hackney North and Stoke Newington MP was earlier accused of ‘inflaming racial tensions’ and challenged for not doing her ‘homework’ after appearing on LBC’s Cross Question.

She later appeared on BBC’s Newsnight where she was challenged by Emily Maitlis for doubling down on her stance that the attack was related to Ms Johnson’s activism.

Today, police confirmed they are hunting ‘four young black men’, after the mother of two Sasha Johnson was shot in the head during an all-day party in Peckham in the early hours of Sunday morning and once again stressed there was no evidence to say it was a targeted attack. 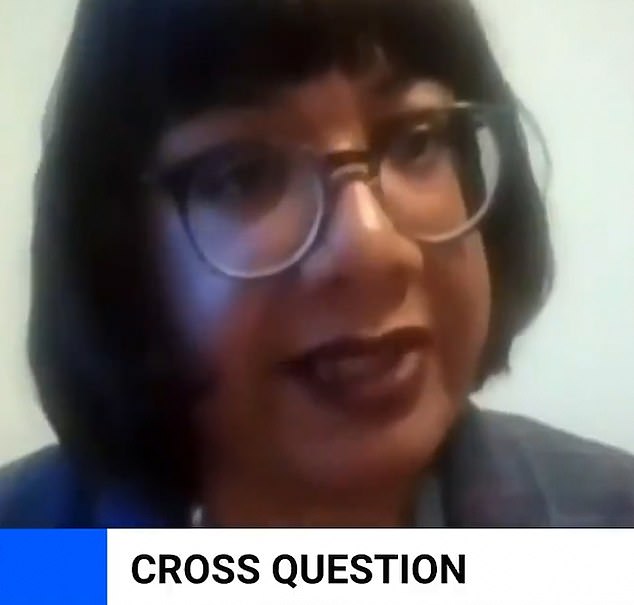 Speaking on LBC yesterday evening, Diane Abbott, 67, was asked if she was ‘inflaming racial divides’ over a tweet she posted on the shooting of Black Lives Matter activist, Sasha Johnson 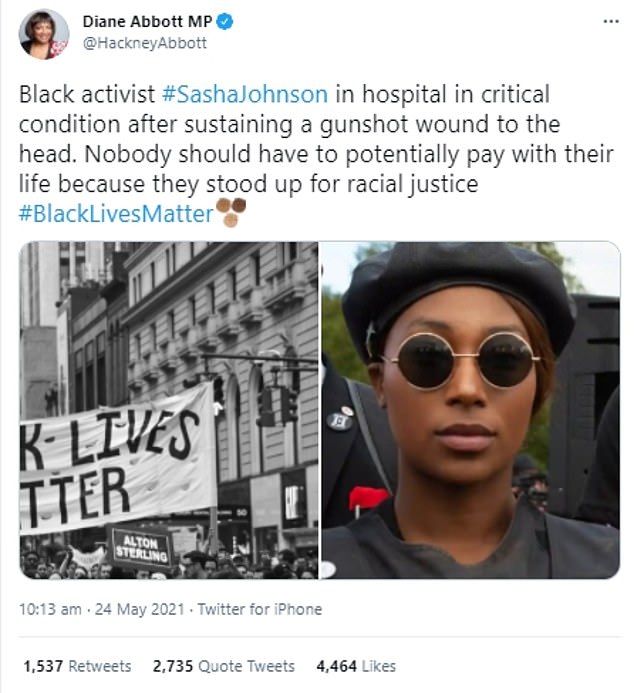 Ms Abbott tweeted about the shooting of Sasha Johnson (pictured), writing: ‘Nobody should have to potentially pay with their life because they stood up for racial justice’ 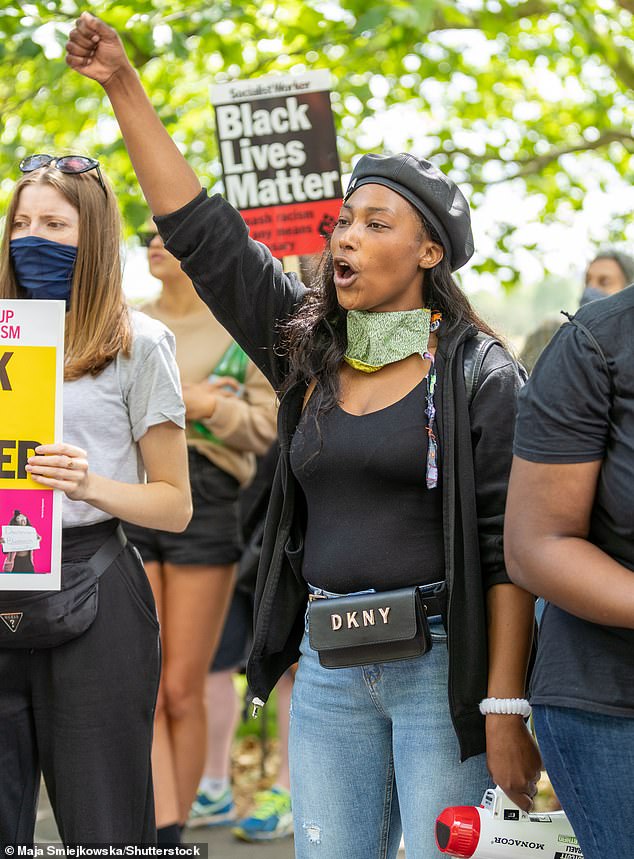 Sasha Johnson, at Hyde Park in London during a Black Lives Matter demonstration, June 2020. She is currently fighting for her life in hospital after being shot in the head at a Peckham party

Yesterday, Ms Abbott had tweeted: ‘Black activist Sasha Johnson is in hospital in critical condition after sustaining a gunshot wound to the head.

‘Nobody should have to potentially pay with their life because they stood up for racial justice #BlackLivesMatter.’

Host Iain Dale pointed out that Ms Abbott had linked the shooting to racial justice, despite witnesses claiming otherwise and there being no evidence at this time that this was a targeted attack on the self-styled ‘Black Panther of Oxford’.

This came despite an official Met Police statement more than 12 hours earlier, which stated: ‘While the investigation is at an early stage, there is nothing to suggest that the woman who was shot was the subject of a targeted attack or that she had received any credible threats against her prior to this incident.’

Her tweet sparked outrage online and was later the subject of broadcasters’ questioning.

Grilling Ms Abbott on LBC’s political debate programme yesterday evening, Iain Dale brought up her social media post which was ‘coming under a lot of fire’.

Dale said: ‘You’ve linked this shooting to racial justice, even witnesses suggest this was gangland killing.

‘Haven’t you actually inflamed racial divides by tweeting something when you haven’t done your homework?’

‘Just by plainly linking it to racial justice, you are creating a division there when you don’t know that’s true.’

Abbott denied the accusation and said: ‘I mean you didn’t see the commentary on this woman being shot in the head.

‘There was a huge amount of concern about it.

‘If you raise issues of race and are accused of inflaming tensions, that doesn’t get us anywhere fast.’

‘She [Sasha] is a Black activist. She was shot in the head and people were concerned as to why.

‘It may have been that she randomly took a bullet… we don’t know for certain’.

To which Dale replied: ‘Yes exactly, which is why you shouldn’t have tweeted what you did.’

Ms Abbotts’ tweet is locked, meaning only people she tags can respond, and has been liked more than 4,500 times.

In a later interview with Emily Maitlis on BBC’s Newsnight, Abbott doubled down on her answers and again refuted claims she was stoking racial division.

Referring to the original tweet, the BBC presenter questioned ‘facts that didn’t add up’.

And when Ms Maitlis pointed to the lack of connection between Johnson’s activism and the shooting, Ms Abbott interrupted her.

She said: ‘When a person of colour is attacked for raising issues to do with race that doesn’t take the debate further forward.

‘If people are inflamed about race in this country, you need to look at the underlying issues.’

Maitlis responds: ‘So Diane is saying you can make this connection because somewhere along the lines it was connected to race.’ 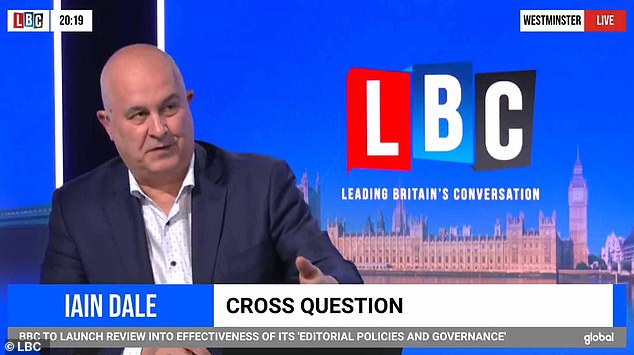 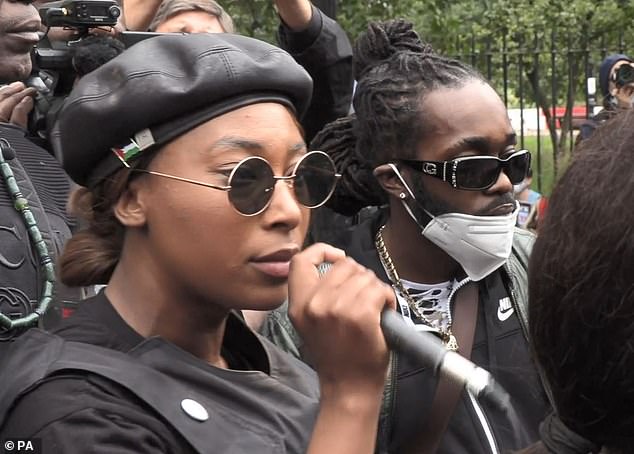 Sasha Johnson, co-organiser of the Million People March, pictured during a demo in Notting Hill, London, has been shot in the head and is fighting for her life in what appears to be a drive-by shooting caused by a row between two rival gangs in Peckham

No evidence Sasha was the target, says Met

The Met has again denied that Sasha Johnson was the intended target of the shooting.

Commander Alison Heydari said: This was a shocking incident that has left a young woman with very serious injuries.

‘Our thoughts are with the family of Sasha Johnson who are being supported by specially trained officers.

‘A dedicated team of detectives are working tirelessly to identify the person – or people – responsible for the shooting.

‘They are making good progress but they need the public’s help.

‘From our enquiries so far, we have established that Sasha had been at a party at a house on Consort Road in Peckham early on Sunday morning.

‘Around 3am a group of four black males dressed in dark coloured clothing entered the garden of the property and discharged a firearm. They had left the scene before officers arrived.

‘We are aware of Sasha’s involvement in the Black Lives Matter movement in the UK and I understand the concern this will cause to some communities – however I wish to stress that at this time there is nothing to suggest Sasha was the victim of a targeted attack.

‘We are also not aware of any reports of threats made against her prior to this incident.

‘I want to take this opportunity to reassure you that we are doing everything possible to identify those responsible and to bring them to justice.

‘Tackling violent crime on the streets of London is a top priority for the Met, and the people of London have a vital role to play in that.

‘If you have any information about the events of Sunday morning we need you to contact police immediately by calling 101. You can also report information anonymously to Crimestoppers online on by calling 0800 555 111’.

Angela Lopes Garcia tweeted: ‘Does she actually have facts and knows what she is talking about?

‘This is quite concerning for a member of a political party. She is doing absolutely nothing but inflicting more hatred instead of uniting people.’

@WestHamMatters said: ‘Diane Abbott has once again attempted to create racial tension with a tweet.’

While @festa197 wrote: ‘Abbott will never turn down an opportunity to racebait and will never admit she is wrong.’

This latest fallout follows the attack on Sasha Johnson, who was shot in the head by a gang of four black men who opened fire in the garden of a Peckham all-day party.

Ms Johnson was shot in the head by a gang of four young black men who stormed into the garden of a Peckham all-day party and opened fire – but there is no evidence the BLM activist was the intended target, Scotland Yard said today.

One neighbour told MailOnline they heard ‘two shots’ and ‘screeching tyres’ at around 3am Sunday, as forensics teams comb the area in south-east London for bullet casings and the weapon.

Scotland Yard today quashed rumours that the shooting was a targeted hit on the BLM activist.

Commander Alison Heydari has made an appeal for anyone who knows the identity of the shooters to come forward and help police ‘bring them to justice’.

The self-styled ‘Black Panther of Oxford’, 27, who called for the police to be defunded after the murder of George Floyd in the US last summer, is fighting for her life in hospital following the attack in Peckham, south-east London at 3am on Sunday.

Speaking outside Scotland Yard today Commander Heydari said: ‘We have established that she was in a party in Peckham.

‘At about 3am a group of four black men dressed in dark clothing entered the garden of the property and discharged a firearm.

‘We’re aware of Sasha’s involvement in the Black Lives Matter movement and the concern this will cause some communities.

‘But at this time we have no information that suggests that she was subject to a targeted attack.

‘We’re also not aware of any threats to her life prior to this incident’.

And Sasha’s Taking the Initiative Party, whose leader has demanded the police are defunded, has refused to believe Met assurances alleged death threats weren’t credible as they described receiving emails and social media messages from people ‘celebrating Sasha’s attack’. 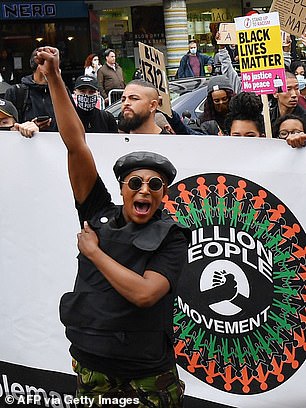 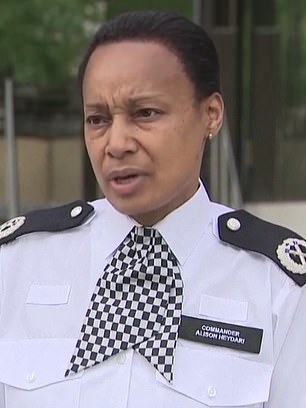 Sasha Johnson from the Rhodes Must Fall campaign speaks at Parliament Square in London last July. She is in a critical condition in hospital today after being shot in the head at a house party. Met Commander Alison Heydari insists there is no evidence she was the target of the hit 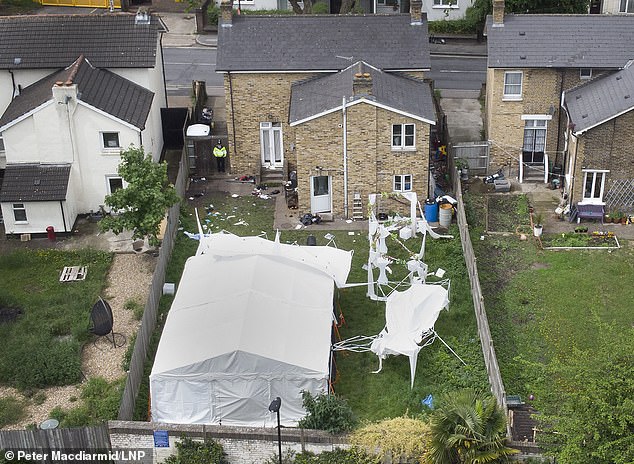 Four black men, dressed in dark clothing, entered the garden and opened fire, hitting Sasha in the head, police have confirmed this morning

In a statement released on Sunday, TTIP said: ‘It is with great sadness that we inform you that our own Sasha Johnson has sustained a gunshot wound to her head.

‘She is currently hospitalised and in a critical condition.

‘The incident happened in the early hours of this morning, following numerous death threats.

‘Sasha has always been actively fighting for black people and the injustices that surround the black community.’

Around 50 people held a vigil for Ms Johnson yesterday evening and said prayers under a bandstand in Ruskin Park, Lambeth as one friend said: ‘She is a light in the darkness and she continues to shine’ and added they had been ‘blessed’ by her smile as they chanted for her.

Online activist page Justice for Black Lives asked supporters to ‘show support for her recovery’ and ‘take a stand against senseless violence’ at the event, while photos showed supporters crying and embracing each other as they gathered outside.