A DELTA variant Covid cluster in the North West is spreading across the regions as infection rates continue to rise.

The interactive map below reveals if your area is a Covid hotspot as cases rapidly increase in some areas of the North East and the South West.

The North West remains the biggest hotspot for the virus with the 16 most infected areas of the country being focused in the region.

Blackburn with Darwen in Lancashire continues to have the highest rate, with 796 new cases in the seven days to June 17 – the equivalent of 531.7 cases per 100,000 people.

But cases have now started to spread further across the region and are also seeping into the North East.

This spread in the North East has not just reached Newcastle and data from Public Health England (PHE) also shows that cases in County Durham have jumped from 66.6 to 182.6. 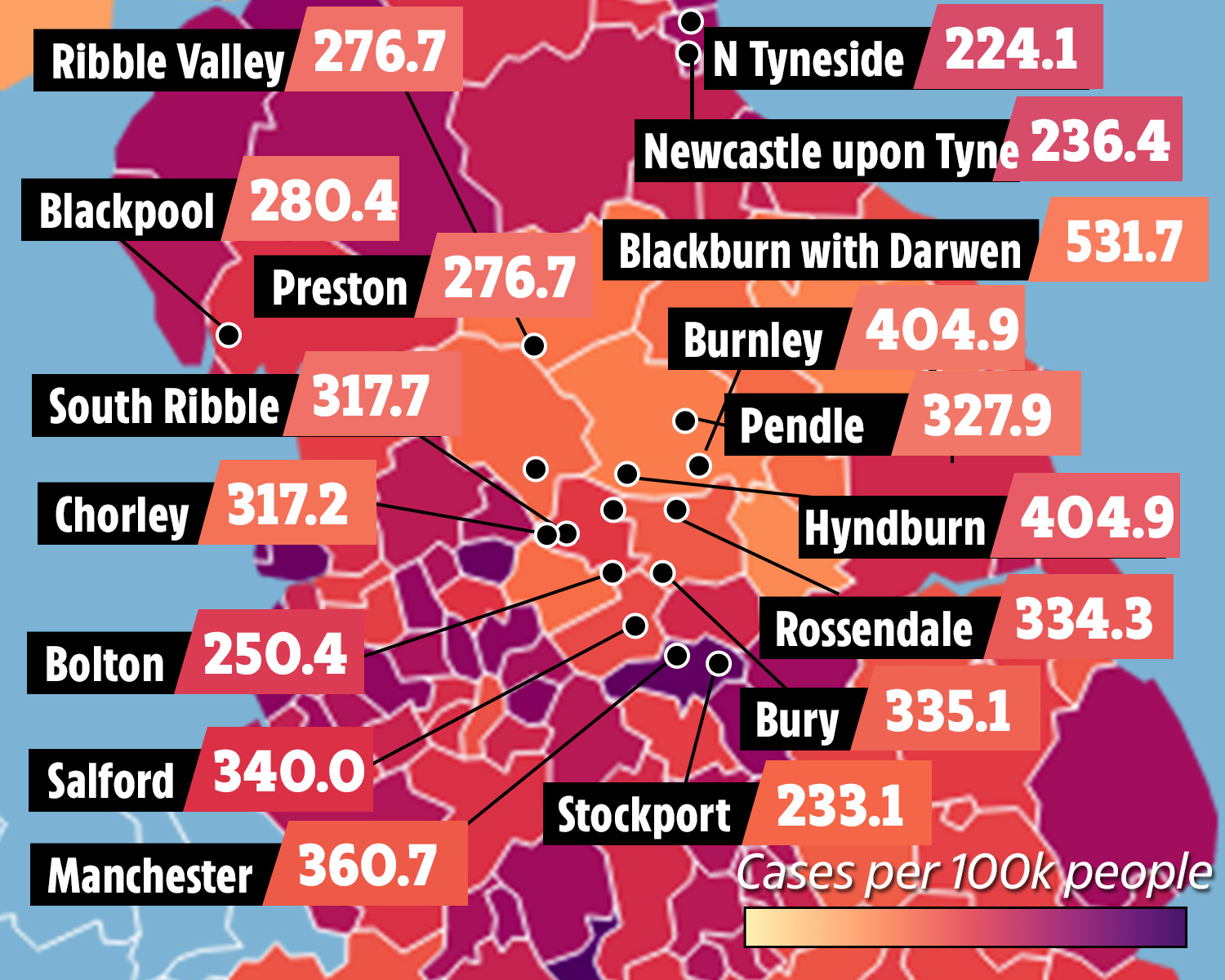 In County Durham and Northumberland, rates have increased by 100 per cent.

Another area that has witnessed a large increase in cases in the last week is Harborough in Leicestershire, where cases have jumped from 37.3 to 142.8.

But it's not just the North of England where infections are on the up.

In the last week cases in some areas of Devon and Cornwall have doubled -in Cornwall and the Isles of Scilly infections have jumped from 45 cases per 100,000 to 144.

Cases have also seen a sharp increase in Exeter, Mid Devon, Torbay and South Hams, but remain relatively low compared to rates in the North West.

This spread of cases from the North West is seen clearly in the regional data.

In the North West around 2,441 people are testing positive for the virus each day, with around 53 people being admitted to hospital with Covid on a daily basis.

Across the region as a whole daily infections are up from last week when 2,262 people a day were testing positive – but in contrast, hospitalisations are down and last week 57 people were being admitted each day.

In the North East 848 people are testing positive on a daily basis, this is up from 413 positive tests a day that were being recorded last week – showing the spread of infection across the region. 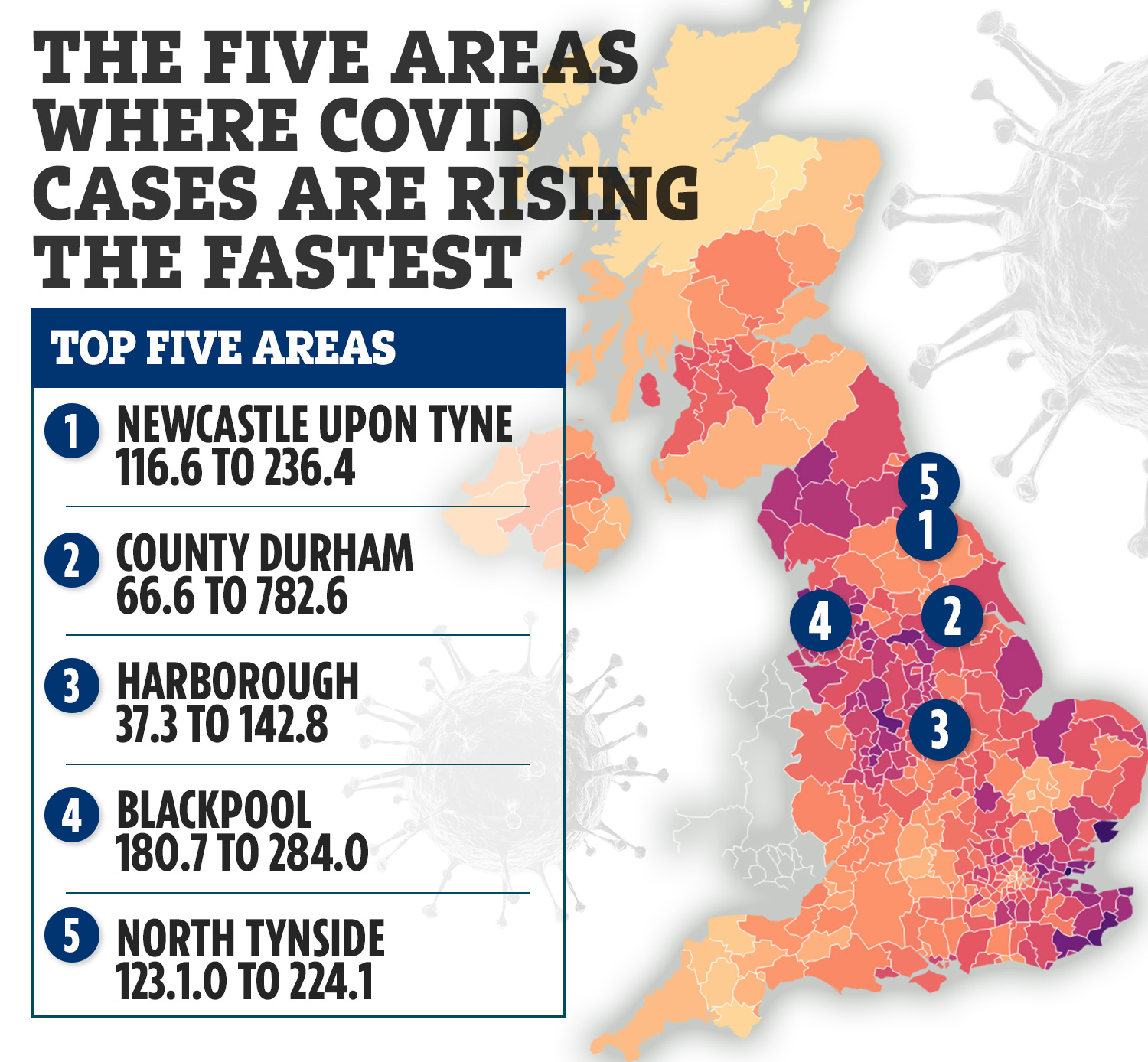 The North East shares an NHS region with Yorkshire and the Humber and hospitalisations are at 28 a day, last week 12 people were being admitted each day.

In the South East 818 people are testing positive each day, 746 in the South West and 737 in the West Midlands.

Around 508 positive tests are being recorded each day in the East Midlands and 411 in the East of England.

Cases remain relatively high in the UK, with 10,633 new infections recorded yesterday- hospitalisations and deaths are still not as bad as they were in previous waves of the pandemic. 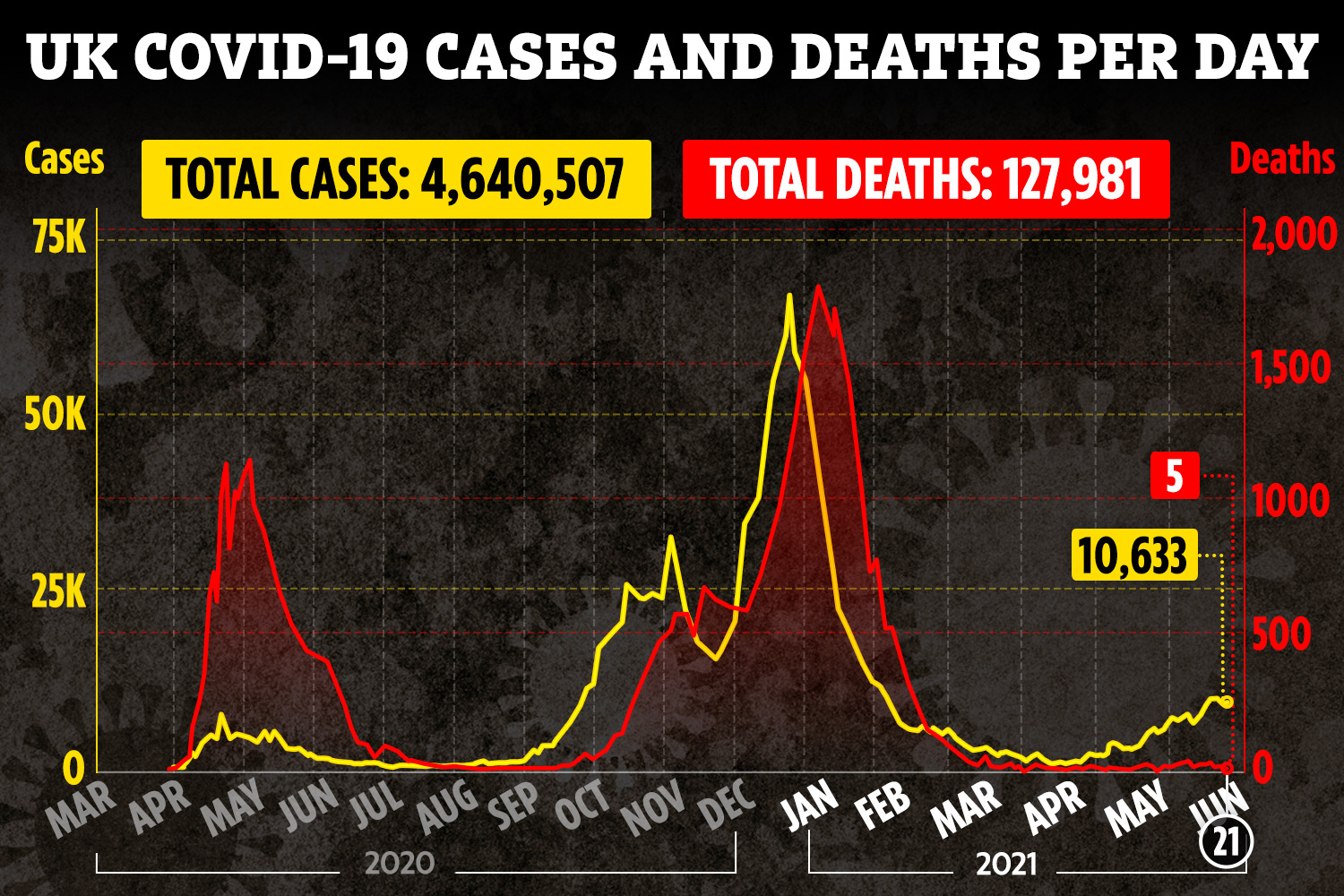 But despite the jump, hospitalisations remain at a daily rate of 226, with 1,413 admissions reported between June 9 and June 15.

By comparison, 4,579 Covid patients were admitted to hospital on January 12 – a record high for daily Covid admissions.

The latest figures mean a total of 4,640,507 cases have been recorded in the UK since the pandemic first unfolded.