The right to due process – protected under the U.S. Constitution – has transformed into a point of contention in the Minnesota city of Brooklyn Center after former police officer Kim Potter fatally shot 20-year-old Daunte Wright during a traffic stop, evoking several consecutive nights of civil unrest that has spilled into Minneapolis.

Brooklyn Center City Manager Curt Boganey was fired for arguing at a press conference that the officer should receive due process, and the police chief, Tim Gannon, offered his resignation after publicly suggesting the same.

“All employees working for the city of Brooklyn Center are entitled to due process with respect to discipline,” Boagney said at the press conference which included journalists and activists, “This employee will receive due process and that’s really all that I can say today.”

Boagney had worked for the city of Brooklyn Center since 2003 — including 15 years as city manager.

“We are standing in solidarity and calling for the firing of this officer,” one activist told the city manager. “You have talked about her having due process – although Daunte Wright did not get due process. She needs to be fired immediately to send a message that this type of behavior will not be condoned within the city of Brooklyn Center.”

“Thank you, I appreciate those comments,” Boganey, who is Black, responded.

In a matter of hours, Brooklyn Center City Council held an emergency meeting and voted 4-1 to relieve the city manager of his duties, which had included responsibility and command over the police department. Mayor Mike Elliott’s office then assumed command authority over the police department and Dr. Reggie Edwards was named the new acting city manager for the municipality which is located in Washington County.

Speaking at the virtual council meeting, Council Member Kris Lawrence-Anderson said she felt compelled to vote to remove Boganey as city manager because she feared retaliation by protesters.

“He was doing a great job. I respect him dearly,” Lawrence-Anderson reportedly said, according to the Independent Women’s Forum. “I didn’t want repercussions at a personal level.”

Meanwhile, Potter, a 26-year veteran of the force who once led the local police union, and her husband, who is a police officer in another town, had to “flee their home” in the Minneapolis suburb of Champlin, National Police Association Spokeswoman Sgt. Betsy Brantner Smith told Fox News on Thursday.  The couple had been doxed and their home address was posted on social media.

Just four days after Wright was fatally shot during a traffic stop, prosecutors in Washington County announced the charges in the case. Potter was arrested Wednesday and charged with second-degree manslaughter. She was released later that day on a $100,000 bond and made her first court appearance via Zoom Thursday.

Security fencing was erected outside Potter’s home and Champlin Police vehicles were photographed both in the driveway and on the street. Smith, who says she speaks regularly with law enforcement officials in the area, said two officers have been working around the clock shifts to monitor the home, further tying up the small town’s resources. 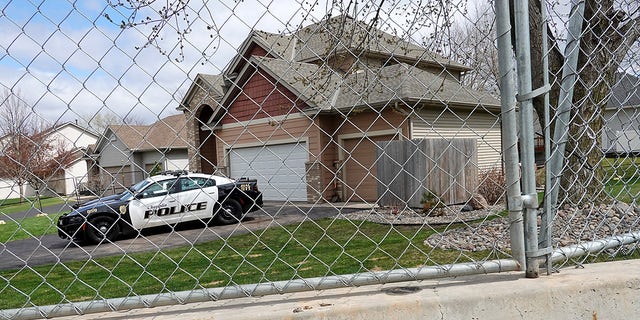 “When you talk about due process, she’s already been arrested and will make her first court appearance. But she can’t even be in her own home,” Smith said. “These are just subdivisions, so if you’re Kim Potter’s next door neighbor, what is your life going to become? Here we have two police officers who live in this house and they can’t even protect themselves.”

“We’re entering into this bizarre mob rule,” Smith continued. “I believe it’s really the minority but it’s that loud, boisterous minority and unfortunately it’s being politicized… Antifa isn’t afraid to be violent.”

The Fifth Amendment to the U.S. Constitution states the U.S. federal government shall allow no one to be “deprived of life, liberty or property without due process of law.” The Fourteenth Amendment, ratified in 1868, also has a due process clause to describe how states are also obligated to ensure fair procedures, according to the Legal Information Institute at Cornell Law School.

At the press briefing on Monday, after Elliott said he supported the firing of the officer involved in Wright’s death, Gannon fielded a question about Potter’s status.

“My position on that is that the officer is afforded due process just like anybody else does,” Gannon said, differing from the mayor’s stance. “She has the right to be heard. She has the right to give her statement. She has a right to tell how she felt, what she thought. Not what I thought, not what I saw.”

Potter had been placed on standard administrative leave at that time, and the incident remained under investigation by the Minnesota Bureau of Criminal Apprehension (BCA).

Some people attending the press conference tried to interrupt the chief as he was explaining his position. “Time out. She will not be returning to duty until this investigation has run its course and for all intents and purposes, I think we can look at the video and ascertain whether or not she will be returning,” explained Gannon.

Vowing a commitment to transparency, Gannon, going against the advice from the BCA, made the decision to release officer-worn body camera footage of the incident during the press conference. The chief prompted criticism by stating he believed the unidentified female officer had intended to reach for her Taser, but instead grabbed her handgun, categorizing the incident as an “accidental discharge.”

Wednesday marked the fourth consecutive night of violent demonstrations in the region, as more than 3,000 Minnesota National Guardsmen have been activated also during the trial for former Minneapolis police officer Derek Chauvin charged with murder and manslaughter in the death of George Floyd.

Minnesota Gov. Tim Walz at a press conference on Thursday detailed instances of individuals carrying umbrellas as shields, tossing bricks, frozen water bottles and commercial-grade fireworks at law enforcement officers. He also said neighbors have raised concerns about chemical agents used by law enforcement seeping into their homes and armored vehicles in their streets. Minnesota law enforcement officials said the majority of those arrested Wednesday were not from Brooklyn Center and had come from out of town.

The National Police Association’s Smith also questioned who would want to become a police officer now amid pushes in several states to end qualified immunity.

The retired sergeant told Fox News that officers would no longer be protected from frivolous lawsuits and their personal resources would be drained whether they win the case or not in covering the expenses to pay for counsel.

Smith said police unions “help ensure due process,” and this discussion now about due process “is only going to make police unions stronger” as police officers are left with no other entity out there willing to protect them.