Premier Daniel Andrews may be off for up to three months after injuring himself in a fall, leaving open the prospect of an extended political absence at the same time one of his most senior ministers, Police Minister Lisa Neville, is also on leave.

Mr Andrews remained in intensive care at The Alfred hospital on Wednesday in a stable condition under pain management.

Late on Wednesday night, the Premier’s Office said there was no “immediate” need for spinal surgery, according to clinicians at The Alfred.

A government source who spoke on condition of anonymity said there was still more than a 50 per cent chance Mr Andrew’s would need surgery, but that decision would be made closer to the weekend.

Mr Andrews was comfortable, according to The Alfred’s director of ICU, Associate Professor Steve McGloughlin.

“A multidisciplinary team including intensive care, trauma and orthopaedic specialists has developed a treatment plan, together with the Andrews family,” he said.

“Mr Andrews has sustained some serious injuries, and his condition is being monitored closely.”

A leading orthopaedic surgeon said it appeared he had avoided a worst-case scenario of spinal cord damage, which usually occurred at the time of the injury. 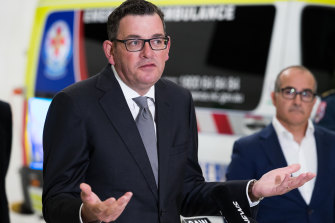 He was initially treated at the Peninsula Private Hospital in Langwarrin and had a range of scans, but on Tuesday evening, after an MRI was assessed by specialists, it was decided to move him to The Alfred.

The T7 is the seventh thoracic vertebra, found in the middle of the chest between the seventh and eighth pairs of ribs. It plays important roles in the support of the spinal cord, ribcage and muscles of the chest.

Leading orthopaedic surgeon John Cunningham – who is not Mr Andrews’ doctor – said based on the description of the Premier’s injuries, he would expect him to be out of work for anywhere between six and 12 weeks, depending on the type of treatment he opted for.

“This is my bread and butter; I see these sorts of fractures all the time,” Mr Cunningham said.

“They really knock people for six. Even after successful treatment, they can have lingering symptoms for some time. He will likely be able to recover from this, but it’s going be a while before he’s standing up in Parliament or in front of the press for hours on end.”

Regardless of the decision on surgery, Mr Andrews is expected to remain in intensive care for several days and will almost certainly be absent for next week’s sitting of Parliament.

Mr Andrews’ absence comes as Ms Neville has taken leave until late May to receive treatment for Crohn’s disease.

A decision on when Victoria will reopen its hotel quarantine program to international arrivals remains pending after Mr Andrews indefinitely paused flights last month due to a leakage of COVID-19 from a quarantine hotel.

Mr Cunningham said for injuries such as Mr Andrews’, the common treatment was to have corrective surgery soon after the injury. Alternatively, a patient could use a high back brace around the thoracic spine, helping them stay upright and preventing spinal deformity while their fracture heals.

Mr Cunningham said it appeared the Premier had avoided a worst-case scenario of spinal cord damage.

“The question of whether or not to operate now – and I say this in general terms – is to do with the chances of him developing an ongoing deformity or what we call a kyphosis,” he said.

Kyphosis is a spinal disorder in which an excessive outward curve of the spine results in an abnormal rounding of the upper back.

Mr Cunningham said there was a very small risk of paraplegia or permanent neurological injury from surgery.

“It is very difficult to be prescriptive when it comes to spinal trauma,” he said.

“You’ve got to really take into account a patient’s whole general health, their workplace and how much time they can take off. I would think that Daniel Andrews would be a man who wants to take the least amount of time off work as possible.”

Melbourne neurosurgeon and spinal surgeon Michael Wong said the length of the Premier’s recovery depended on the severity of his fracture.

“In the event of a minor fracture, you don’t really need surgery. You just need to put the patient in the brace and they would still expect to have pain for quite some time and go through a period of rehabilitation,” he said.

For more severe fractures, the spine can become unstable, and surgery is required.

“If the fracture is so bad that some of the bone fragment has basically come apart and is now impinging onto the nerves of the spinal cord, then you have to operate to protect the spinal cord,” said Dr Wong, who specialises in treating people with chronic pain.

He said surgery involved using some sort of spinal instrumentation, such as metal screws, to stabilise the spine.

“The surgery itself is not a small surgery,” he said. “It is a significant surgery that someone will face when they have spinal fracture.”

Opposition Leader Michael O’Brien said he texted Mr Andrews on Tuesday and wished him well for his recovery.

“You put politics aside for a time like this – you don’t like to see anybody going through that sort of pain, so I do genuinely wish him well,” he said.