D-Day veteran, 92, whose prized medals including a Legion d’Honneur were stolen from his home is presented with replacements ahead of the 75th anniversary of the Normandy landings

A D-Day veteran whose medals were stolen from his home will be attending events to mark the 75th anniversary with a set of replacements thanks to the Royal British Legion.

Jim Kelly, 92, was left devastated when his 1939-1945 Star, France and Germany Star, Defence Medal, War Medal 1939-1945 and Legion d’Honneur were taken from a locked cupboard at his house in Birmingham.

The great-grandfather-of-six, who served with 6th Airborne Division, said he would not be able to go to Normandy for services to commemorate the anniversary without them.

He spoke to the Royal British Legion about the theft and the charity arranged a set of replacements free of charge for Mr Kelly, which were presented to him in front of his proud granddaughters. 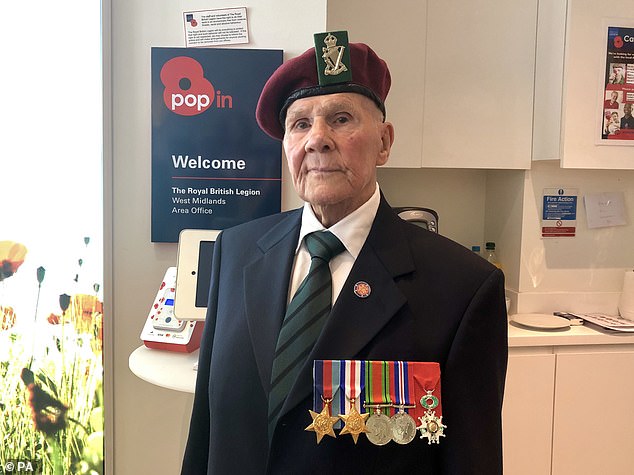 Jim Kelly, who will be attending events to mark the 75th anniversary of D-Day, pictured after his stolen medals were replaced by the Royal British Legion

‘I don’t think I’d have gone without them,’ he said.

‘It means everything to have them back, especially the Legion of Honour.’

Mr Kelly noticed his medals were missing in March, when he went to put them on a new blazer and saw the locked door of the cupboard where he kept them was open.

His family got in touch with their local MP Andrew Mitchell, who worked ‘very hard’ to replace the medals but was unable to, Mr Kelly said.

In April, case worker Andrew Hodson of the Legion visited Mr Kelly to speak to him about going on board a ship chartered by the charity to mark the 75th anniversary of D-Day.

‘Andrew said to me ‘I’ll see you on parade with your medals’,’ Mr Kelly said.

‘I said ‘That’s a sore point because I haven’t got them’. He moved heaven and earth with the Legion to get me replacements.’ 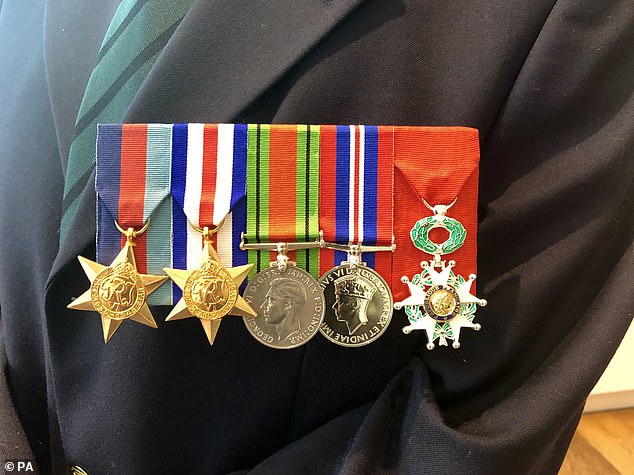 Mr Kelly noticed his medals were missing in March, when he went to put them on a new blazer and saw the locked door of the cupboard where he kept them was open

The veteran was handed his replacement medals at the charity’s Birmingham pop-in centre on May 23.

He said he was ‘delighted’ that the Legion had been able to replace the stolen medals.

‘I know that Mr Kelly will now be able to wear a full set of medals in Normandy with huge pride and it is Royal Sutton Coldfield which will also take huge pride in him,’ he said.

Mr Kelly first attempted to join the Army when he was aged 14, telling the recruiting officer that he was 18 and giving the false name James Henry Bromwich – his mother’s maiden name. 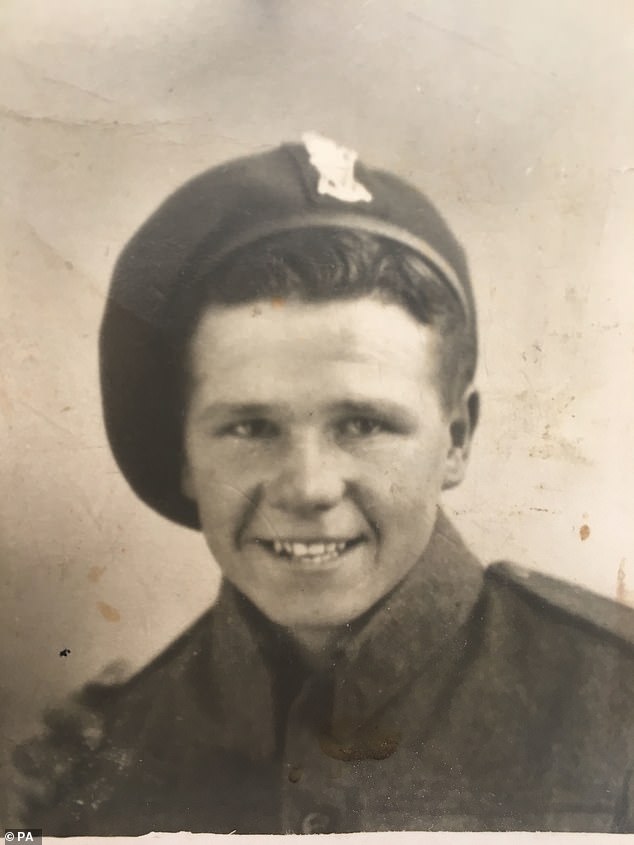 He returned months later and was accepted but his mother came and pulled him out of primary training when she found out where he was.

‘The recruiting sergeant can’t have remembered me. I said I was 23. I didn’t even look 14.

‘He asked me for my birth certificate. I had changed the date of birth on it and made a right mess but they accepted it.

‘I didn’t tell my parents until I wrote home two months later, when I was training in Chesterfield.’

Mr Kelly said he struggled with training as he did not have the strength of his 23-year-old comrades.

He was aged 17 on D-Day, when he served as a machine gunner with 1st Battalion Royal Ulster Rifles as part of 6th Airborne Division.

‘I wasn’t frightened for the simple reason that I was brought up before the war on Hollywood films, where when people were shot it was only a flesh wound or a scratch,’ he said. 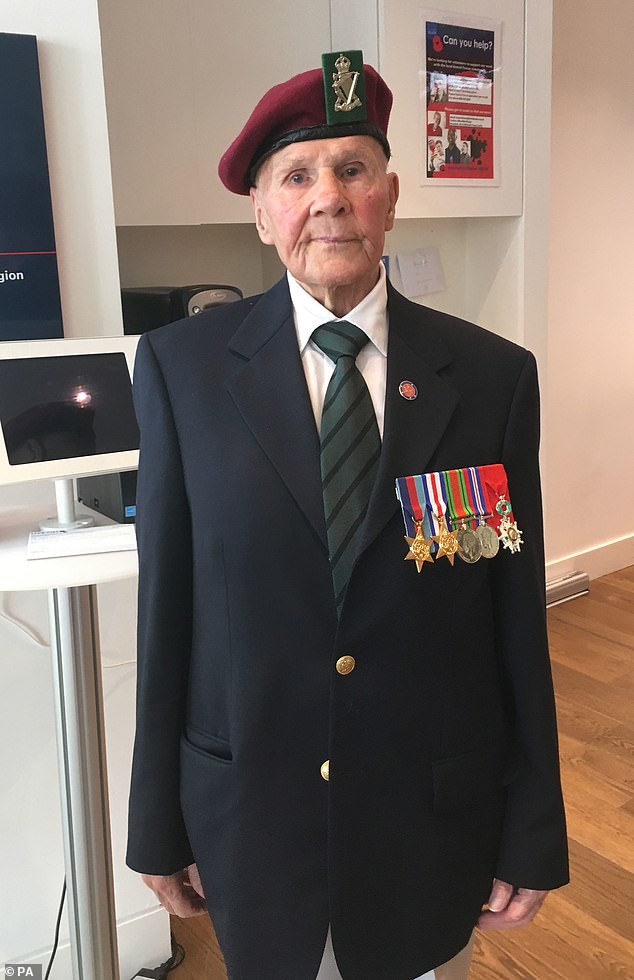 He was aged 17 on D-Day, when he served as a machine gunner with 1st Battalion Royal Ulster Rifles as part of 6th Airborne Division

‘I thought that was what it was all about. I thought I couldn’t get killed. I was 17 and I wasn’t frightened.

‘It was only after when I saw what the war was like.’

Mr Kelly will take his son Keith Kelly, 58, to Normandy for the first time on the Legion’s chartered ship, MV Boudicca.

The ship departs Dover on June 2 and will call at Poole and Portsmouth before heading to Normandy.

He has previously visited the region with his granddaughters Samantha, 28, Natalie, 33 and Becky, 25.

‘I always look forward to visiting the Royal Ulster Rifles memorial – it holds a special memory for me,’ he said.

‘A lot of our chaps were killed.’

While on board the ship, Mr Kelly will keep up his fitness routine, which he started at the age of 69.

He first enlisted in tap dancing and keep fit classes before going to the gym in his 80s.

‘I do the treadmill, rowing machine, press-ups and sits-ups – I’ve already checked that there is a gym on board,’ Mr Kelly said.

‘The nearest chap at my gym is I think 20 years younger and he says he can’t keep up with me.’