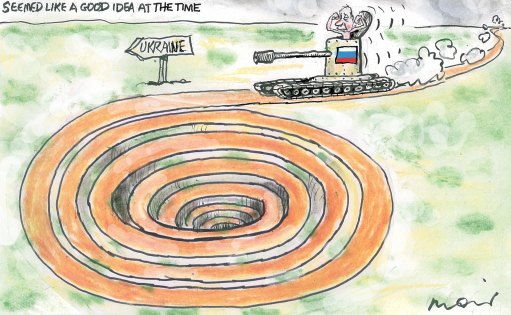 Consider alternatives to increasing interest rates
So inflation is now sitting just under 7 per cent and the Reserve Bank looks set to announce another interest rate hike.

I am no economist but I understand the logic of an interest rate hike is national spending will be throttled back and consequently inflation slowed. But, in reality, rate hikes mean more money to many conservative investors with their super skewed towards cash, in which case higher rates translates to more cash to spend for many.

It makes you wonder whether rates are the appropriate tool for the situation we are in today. On top of that, rate rises are felt most by our young home owners, those of us with loans paid off are scarcely impacted.

If raising rates has a questionable impact on reducing national spending and it’s unfair in that it benefits some and hinders others then why not look at alternatives. Why not consider a one-year extra tax of, let’s say, 2 per cent on all wage earners and businesses rather than a rate hike for the next 12 months. Surely that would dampen national spending and inflation and it would be a fairer system distributing the burden to all.

Perhaps the taxes raised could be directed to government debt reduction, but that’s another issue.
Gary Homewood, Rosebud

The details will matter
The Labor government is to be commended for committing to tackling multinational corporate tax dodging (“Multinational tax avoidance poses major threat to budget: Leigh”, The Age, 28/9).

However, the details of the design of such measures will matter. For example, currently, multinational corporations can lend themselves money from tax havens and then claim the interest repayments they make to themselves as a tax deduction.

The government has been consulting on placing a more robust cap on the deduction level that can be claimed. However, it has not yet ruled out that any interest repayment to itself denied in one year will not be able to simply be claimed by the corporation in a future year. All the cap would then do is spread the tax avoidance over more years rather than place a meaningful lid on it.

We also need the government to not allow multinational corporations with a history of tax avoidance around the globe to win lucrative government contracts. When that happens, businesses with a clean tax record lose out.
Mark Zirnsak, Tax Justice Network Australia, Parkville

The electorate expects a responsible response
Labor is fully aware that they made an error in supporting the stage 3 tax cuts when in opposition. The economic turmoil resulting from a milder version of such cuts in the UK is sobering. It is stubbornly feckless to continue to champion such high-end tax cuts despite all the evidence that they make no economic sense.

The electorate expects the government to react responsibly to prevailing circumstances and if this involves reversing an ill-considered undertaking made years ago, so be it. We should not all be punished because of some form of warped pride and an unwillingness to change course, even when it’s sensible and necessary.
Peter Barry, Marysville

Irony lost on the wealthy
I was sitting with a group of wealthy self-funded retirees who were discussing their overland tour from Darwin to Broome, bemoaning the limited options for dinner at some remote locations where hospitality venues were not operating every day due to staff shortages.

They proclaimed this could be fixed by cutting the dole so the unemployed would be forced to take jobs in these remote areas. Never mind the lack of and cost of accommodation, the cost of moving, the lack of family support for those relocating (which I pointed out) – just cut the dole.

These wealthy people, who were looking forward to tax cuts, receiving dividends and excess franking credit refunds (upper class welfare), had no sympathy for those who cannot find suitable employment.

The irony of insisting the dole of around $45 per day should be cut while on a cruise returning to Darwin which was costing each person between $1200 and $2000 per day was completely lost on them. Is this the trickle-down spending which the government had in mind when legislating tax cuts for the wealthy? Surely we can move forward by espousing a society where the disadvantaged are helped, not left so far behind.
Louise Kloot, Doncaster

An intolerable mindset
In The Age on Friday a Victorian government spokesman is quoted as referring to “the ultimate need to normalise and treat COVID-19 as a respiratory condition” (“States weigh push to lift coronavirus isolation rule”, 30/9).

An accompanying news report outlines a study that indicates COVID-19 also attacks DNA in the heart (“COVID-19 attacks heart DNA: research”). Further analysis in a separate article acknowledges both the impact of long COVID and that the last wave of the virus has been the most lethal, so far, but the focus is on how we’ve “lost our appetite for restrictions”.

This is all akin to a government talking about normalising and treating dangerous driving as a transport problem while downplaying its real impact on road deaths and injuries.

Further, it’s as if government inaction could be justified by drivers losing their appetite for road laws. We wouldn’t accept that type of mindset on the road toll. Nor can we tolerate it on COVID-19.
Lawrie Bradly, Surrey Hills

It’s been clear for a while
Now we know officially that “Billions spent on housing aid ‘not effective’” (The Age, 30/9). Productivity Commissioner Malcolm Roberts said the 2018 federal/states National Housing and Homelessness Agreement “is a funding contract, not a blueprint for reform”.

The commission review confirmed what’s been abundantly clear for some time – that governments of both persuasions have focused on dealing with symptoms and failed dismally to tackle the deeply embedded underlying causes. It found that $16 billion a year could be much better targeted declaring that “More support is needed for homelessness prevention and early intervention programs”.

Security 101
Some years ago I attended a lecture presented by a forensic accountant on the use and misuse of computers in commerce.

The topic was quite complex and the lecturer, confronted by a small sea of bemused faces, made the following closing remarks: “If you remember nothing else from this lecture remember these two points when using a computer for business or personal use – nothing is ever deleted, and, there is no such thing as computer security.”

So it seems.
Neil Falconer, Castlemaine

Convert the talk to action
This week’s big announcements about earlier coal plant closures in Queensland and the Latrobe Valley represent progress (“AGL’s early coal exit a ‘risk to grid’”, The Age, 30/9), but two things need to follow these pledges.

First, as Commonwealth Bank chairman Paul O’Malley acknowledges, a fair, caring, and just transition for our coal workers and their communities, who have provided reliable energy for generations, is imperative (“Coal-exposed regions need ‘caring’ transition plan: CBA”, Business, 30/9). Thus far, the Greens are the only party that has campaigned for collaborative planning that would provide new employment opportunities and financial support for those impacted. Second, all the climate talk must be implemented.

Listen to the crossbench
The government has made welcome progress with its National Anti-Corruption Commission proposals. It would be a pity if it now allowed the prospect of Coalition support to destroy hopes of the real accountability offered by public hearings.

Bite the bullet and listen to the crossbenchers instead: open hearings are the default setting; closed hearings are for “exceptional circumstances” only.

The new body will not be a place where people are put on trial, it is a body designed to investigate possible corruption, report evidence of corruption and then make referrals for possible charges to other bodies such as the federal police or the department of public prosecutions. After being charged with potential crimes public hearings are certainly appropriate.

The unfortunate fact is public inquiries involve a degree of mud throwing and some of it inevitably sticks regardless of eventual outcomes. This is exactly what Tony Abbott achieved with the royal commission into unions where both Julia Gillard and Bill Shorten had their reputations tarnished in a blatantly political exercise.

The important issue about the National Anti-Corruption Commission is not about public hearings it is about public confidence in the commission.

The key factors that will determine public confidence are: the independence of the commission, the scope of investigative power, the quality of the commissioners and the way they are selected and the security of funding.
Graeme Henchel, Yarra Glen

A stark reminder
The rapid intensification of Hurricane Ian barrelling into Florida’s Gulf Coast is a reminder of how climate change is supercharging tropical storm systems and exacerbating extreme weather events.

Australia is not immune to the warming climate and its effects. The Bureau of Meteorology had recently declared that a third La Nina is officially under way for Australia, with our east coast communities having to prepare for a third year of more rain and floods.

This is our reminder for Australia to transition from fossil fuels as swiftly as possible, but also to plan for adaptation so that the impacts of climate change on our land are minimised.
Ching Ang, Magill, SA

A unique Australian life
The obituary for Phillip Maisel, OAM, describes a unique Australian life of extraordinary significance (“Leaves world-class Holocaust archive”, The Age, 29/9). A Holocaust survivor who worked until the age of 100 to record the tragic testimonies of more than 1400 survivors in an effort to educate people globally about man’s capacity to perform genocide and why it must never be repeated.

He is truly a hero who deserves our greatest respect, and there can be no more fitting tribute than for all Australians to teach our children and all future generations about the Holocaust and its lessons for humanity.
Mark Cherny, Caulfield

Imagine the outcry
Just imagine the howls of outrage if a Coalition senator had behaved like Lidia Thorpe is alleged to have. Greens leader Adam Bandt’s apology came 12 months too late and only after the allegations of Thorpe’s outrageous and totally unacceptable bullying behaviour were made public.

This is not the first time a Greens politician is alleged to have behaved appallingly, and now we can add Bandt’s name to the list through his spineless leadership on this issue.
Greg Hardy, Upper Ferntree Gully

What has Jane Hume’s “heart” taught her about the suffering of non-family members, eg refugees locked up indefinitely, children as young as 10 incarcerated, First Nations people struggling to be heard, etc (“Liberal senator changes view on assisted dying”, The Age, 29/9)?
Bernd Rieve, Brighton

Hopefully, there will not be any corruption for the proposed National Anti-Corruption Commission to investigate.
Phil Lipshut, Elsternwick

UK Prime Minister Liz Truss has finally found a way to deal with the long-standing problem of illegal immigration to the UK. Simply make the UK into a worse economic basket case than the countries they are fleeing.
Barry Lizmore, Ocean Grove

The digital world
Can we please stop calling our most private and personal information our “data”?
Ron Mather, Melbourne

With our digital society we have way too many digits in too many pies.
Bryan Fraser, St Kilda West

The boffins finally accept that home buyer grants push up prices. In other news, water is found to be wet.
Mark Freeman, Macleod

Finally
Anthony Albanese should contact his British counterpart Liz Truss and check if there are some slightly used British nuclear submarines coming on the market in the next few months, a giant fire sale may be imminent.
David Kerr, Geelong

Michael Bachelard sends an exclusive newsletter to subscribers each week. Sign up to receive his Note from the Editor.