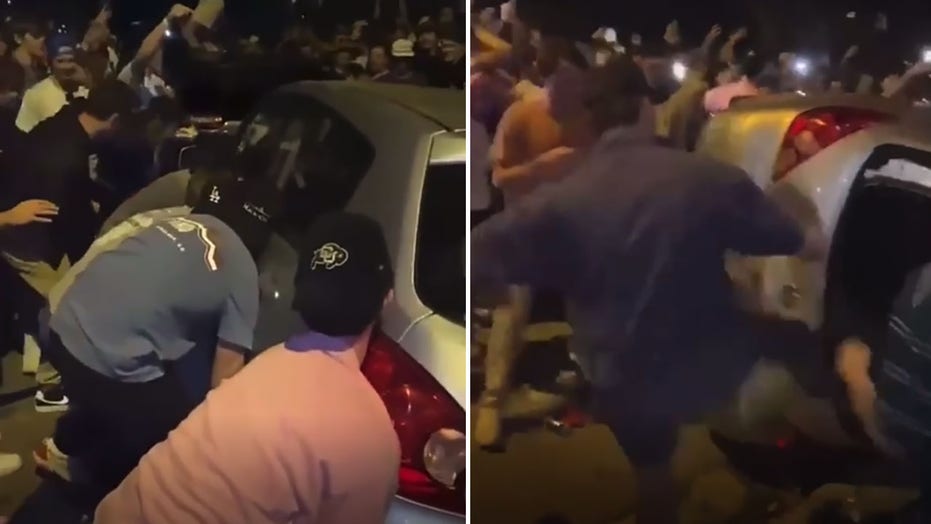 Police in Boulder, Colorado, have released a new video and over a dozen new images of people who took part in violence and property destruction during an unruly weekend street party near Colorado University.

The incident happened on Saturday on University Hill and resulted in three SWAT officers being assaulted by bricks and rocks, police have said. There was also significant damage to property, including a fire truck and an armored police vehicle.

Vehicles belonging to residents were also jumped on and damaged, according to police, including one that the mob flipped over.

The video released Monday shows a short clip of multiple people hanging onto the back of a moving fire truck. The pictures show individuals as they flip a car on its side, standing on top of vehicles and someone lighting a firework in the street.

Detectives have received more than 750 tips since Sunday regarding the incidents and have asked the public to help identify those in the video and pictures.

“Due to the magnitude of information and the prevalence of social media, the amount of tips is unlike any other previous investigation, and will take time to review and piece together,” police said Monday.

Several individuals have already been identified, police said, and detectives wish to speak with the others seen in the images.

Any CU Boulder students found to have violated the COVID-19 public health orders may face disciplinary action, the university said. Those involved in the violence and destruction may face serious sanctions, including permanent expulsion and criminal charges from the city and county.

“The violence, vandalism and acts of aggression we saw yesterday are unacceptable and we will do all we can to hold CU students who engaged in them accountable,” UC President Mark Kennedy said in a statement Sunday.