Washington: US President Joe Biden used the waning hours of a White House climate summit to hammer home a message aimed as much at Americans as at the dozens of world leaders he had convened: Combating the Earth’s warming is not simply a responsibility, but a chance to boost battered economies.

“Today’s final session is not about the threat climate change poses,” Biden said on Friday morning from the East Room.

“It’s about the opportunity that addressing climate change provides, an opportunity to create millions of good-paying jobs around the world in innovative sectors.” 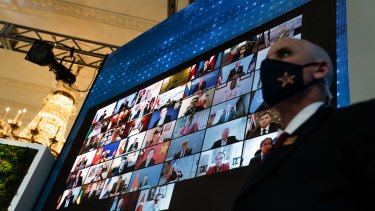 World leaders listen remotely during the virtual Leaders Summit on Climate in the East Room of the White House in Washington, DC. Credit:Bloomberg

“When we invest in climate resilience and infrastructure, we create opportunities for everyone. That’s at the heart of our jobs plan that I proposed here in the United States,” Biden said.

“It’s how our nation intends to build an economy that gives everybody a fair shot.”

Thursday’s marathon virtual summit was primarily intended to highlight a new US pledge to make deep cuts to its carbon emissions this decade, mend the nation’s diplomatic reputation and rally other nations to embrace more ambitious climate goals of their own in coming months. 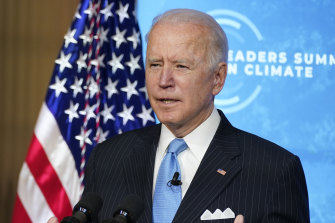 US President Joe Biden speaks to the virtual Leaders Summit on Climate.Credit:AP

Friday’s session – which once again featured heads of state, business executives and labor representatives – was meant to underscore the administration’s assurances that combating climate change should not inflict economic pain, but rather help lift up communities across the country and the world.

Republicans for years have forced Democrats on the defensive by portraying climate action as a concession to fuzzy environmentalism at the cost of jobs for ordinary Americans.

Biden is pushing hard to redefine the debate, arguing that renewable energy is at least as much an economic opportunity as an environmental imperative.

It’s a message that Biden has repeated over and over again on the campaign trail, in interviews, in speeches and in articulating the motivation behind his proposed $2 trillion infrastructure plan, which would include massive new investments in clean energy, electric vehicles and weatherization. 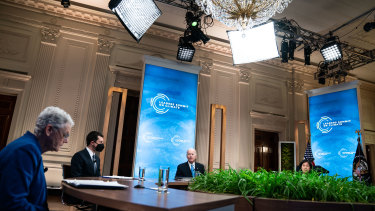 US President Joe Biden, centre, speaks during the virtual Leaders Summit on Climate in the East Room of the White House in Washington, DC. Credit:Bloomberg

Biden’s pledge this week to cut US greenhouse gas emissions 50 to 52 per cent by 2030, relative to 2005 levels, would require far-reaching changes that impact how Americans power their homes, how they travel and even how they grow food.

To meet that goal, the administration ultimately must rely on assumptions about the future that are hard to guarantee. Will a sharply divided Congress, home to some Republicans who say such policies risk leaving behind communities that rely on fossil fuels, fund Biden’s proposals?

Will future administrations keep in place any new regulations aimed at curbing emissions? And will such policies survive inevitable court challenges?

On Friday, those questions would have to wait.

Biden lined up a cast of cabinet members and enthusiastic business and labor figures to praise his jobs plan, highlighting the president’s message that building a carbon-free economy can create “good union jobs,” as administration officials said repeatedly this week.

“There are no jobs on a dead planet,” said Sharan Burrow, general secretary of the International Trade Union. “We will work with everyone for a living planet.” Burrow is the former President of the Australian Council of Trade Unions.

Buttigieg said that a majority of the “millions” of transportation jobs redesigning roads, laying rail lines and installing electric vehicle charging stations “will be available to workers without a degree,” a group that has suffered acutely during the pandemic-driven economic downturn.

“We are all in this together,” he added. “Pursuing a net-zero goal is not a zero-sum game.”

Former New York mayor Mike Bloomberg, who was appointed this year by the United Nations as a special envoy for climate ambition and solutions, underscored that mayors, governors and business leaders will play a central role in the push to reduce the nation’s emissions.

After all, those cities and states continued to push forward climate action even during the Trump administration.

“Cities and businesses hold the key to defeating climate change,” Bloomberg said. “They are responsible for the vast majority of emissions. So helping them and incentivising them to take action really is critical.”

Adding to that dose of realism were reminders that even as some climate activists have pressed Biden to move more quickly, many Republicans have not embraced his climate aspirations. Rather, they argue that too hasty a shift away from fossil fuels could harm US competitiveness and hurt the very communities that the president says he wants to help.

Senate Minority Leader Mitch McConnell this week tweeted that Biden’s “zeal for costly climate policy at home is not matched by our biggest competitors.” China accounts for roughly double the greenhouse gas pollution of the United States, he noted, and has not yet demonstrated a commitment for the same rapid shift. “Democrats can kill US jobs & industries with no real impact on global emissions,” he wrote.

Dating back to his campaign, Biden has tried to embrace the goals of environmentalists in a way that doesn’t alienate labor unions and workers who depend on the fossil fuel industry.