THIS chilling footage shows a great white shark prowling just feet away from six oblivious surfers as they wait to catch a wave.

The drone footage, filmed by a local teenager, shows the fearsome predator cruising amongst the group of friends in Plettenberg Bay, South Africa. 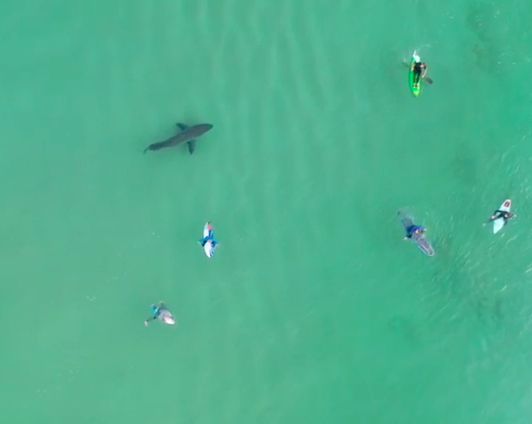 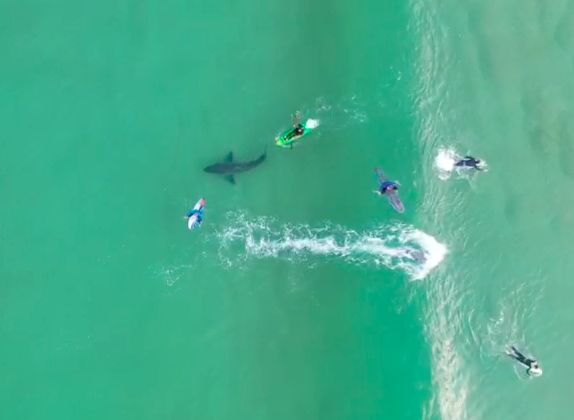 The great white goes undetected by the group for 25 seconds, edging closer to its potential prey.

It is only when the kayaker spots the shark’s fin breaking the surface of the water that the group realise the danger they are in.

The kayaker warns his surfer pal whose legs are just a couple of feet from the jaws of the great white.

In a bid to save his friend from a terrifying attack, the kayaker pushes his canoe forward distracting the shark long enough for them both to make an escape.

The great white breaks away from the group allowing them to head back to the safety of the shore.

Nature enthusiast Zachary from Cape Town was on the beach with his father using his drone when he captured the chilling footage. 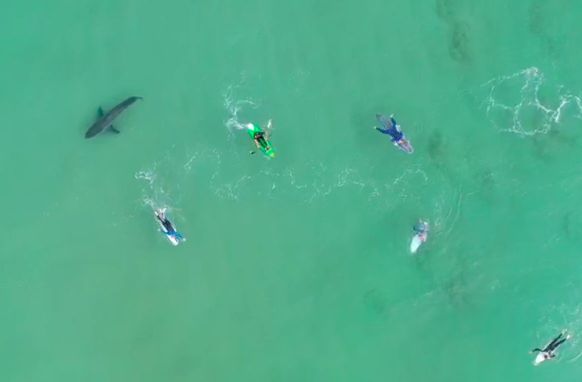 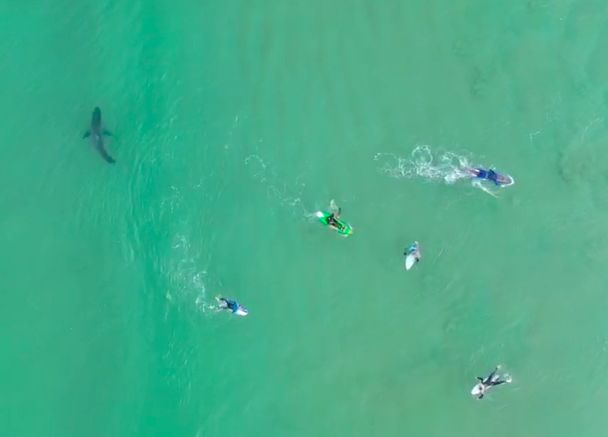 Zachary told reporters: "We normally fly the drone to capture nature and I saw the shark and followed it and when I saw how close it had got the surfers I told my dad to go get them out of the water.

"He was on his way to get them out but by then the shark was moving quite fast and the shark had actually gone underneath their boards."

National Sea Rescue Institute press spokesman Craig Lambinon said they were appealing to all surfers, paddle boarders and bathers to be on full alert for great whites.

He said in a media statement: “Those using the water around the Southern and Eastern Cape need to be cautious due to a high number of great white shark sightings and close encounters at present.

“The increase of sharks at this time of the year is part of the normal aggregation of these animals that take advantage of natural prey like seals and fish coming close inshore at this time.

“A large amount of shark sightings and some encounters have been reported close inshore along the Plettenberg Bay coastline over the past few weeks and on Sunday and with this sighting."

Sarah Waries of City of Cape Town Shark Spotters programme said: "The behaviour seen in this drone footage shows the shark is aware of the surfers and the great white is investigating the surfers.

“It is important for people to remember that Great White sharks are naturally inquisitive Apex predators and that although shark bites are rare, water users must understand the inherent risk associated with sharing the ocean with these animals and change their behaviour accordingly to avoid encountering sharks".

Over the last ten years, there have been 12 shark attacks in South Africa with five by great whites, four by bull sharks, one by a tiger shark and two by unknown sharks.

There is an average of six shark attacks a year in South Africa with 15% proving fatal.