Chicago Mayor Lori Lightfoot and the city’s top cop on Saturday demanded answers to the still-unsolved shooting of a 4-year-old boy who was killed while getting his hair braided on Labor Day weekend.

Their press conference came 59 days after Mychal Moultry Jr.’s death and over another holiday weekend, as Chicago saw six people killed and 26 others wounded in gun violence. There were 24 shooting incidents recorded by the Chicago Police Department from 6 p.m. Friday until before midnight Sunday, a period when children and other party revelers celebrated Halloween.

“These murders don’t happen in isolation, they happen and people know,” Lightfoot said. “Too much bloodshed has happened in our streets, and we cannot stand silently while that happens, not while babies are being taken … So I’m urging and asking and pleading for people with information about MJ’s case and the other 34 unsolved child murders in our city to come forward.”

Moultry’s mother, Angela Gregg, has been canvassing the area every Saturday knocking on the doors of residents’ homes and asking for anyone with information in her son’s killing to come forward.

“I stand here with the families, with other mothers who have had their children slain in this city. It’s unreal what’s happening to our children here,” said Gregg, who also attended the press conference. “We’re coming to you as mothers, as fathers, as parents, as sisters, as brothers asking you to help us seek justice for my son, MJ … do the right thing.”

Gregg told reporters the reward has been raised to $15,000 for information that leads to an arrest or conviction in her son’s shooting.

Moultry was fatally struck on Sept. 3 while getting his hair braided inside an apartment building. Chicago police Superintendent David Brown said grainy video showed a dark-colored SUV pulled up and three people got out and fired into the building. Two bullets pierced a window, striking Moultry. Brown noted that neither Moultry nor his family was a target in the shooting, which investigators believe occurred as part of “a gang conflict happening in this community.”

“His family will never be the same,” Brown said, announcing a new hotline for those with information to contribute anonymous tips. “None of these families will ever be the same. It is the most unnatural thing to do to bury a child. We as a community and a city should never be the same either.”

Of the deadly instances of gun violence this past weekend, two men, ages 26 and 28, were fatally shot just after midnight early Saturday morning in the 2700 block of West Belmont Avenue. Both were rushed to Illinois Masonic Medical Center but did not survive their injuries. About four hours later, another 26-year-old was struck by gunfire in the neck while inside his vehicle in the 900 block of South Monitor Avenue. He was transported to Loyola University Medical Center, where he was pronounced dead. 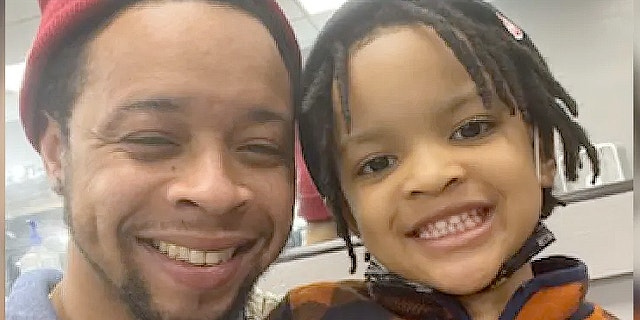 Mychal Moultry, 4, died two days after being hit by stray bullets that went through the window of a home in Chicago. Mychal’s father said he loved playing softball and described him as energetic, loving, courteous and respectful.

A drive-by shooting at about 7 a.m. Sunday in West Garfield Park on the city’s West Side left 56-year-old Keith Melton-McKinney dead after being shot in the head and left shoulder. A second man, 39, was also hit in his left shoulder and was rushed to the hospital and stabilized. Both men were standing in the street when someone passing in a white vehicle opened fire, police said.

An unidentified man believed to be in his 30s was found with a gunshot wound to his torso just before 1 a.m. Sunday in Ukrainian Village on the Northwest Side. He was transported to Stroger Hospital, where police say he later died from his injuries.

Hours later at about 10:30 a.m. Sunday, a 22-year-old woman was approached in the 7600 block of South Morgan Street by another woman, who police say began firing shots in the direction of the victim. The victim suffered a gunshot wound to the face and was rushed to the University of Chicago Medical Center, where she was pronounced dead.

Of the 26 other shooting victims who survived this weekend, a 15-year-old boy was shot in the chest in an alley at about 3:45 p.m. Saturday in the 7900 block of South Justine Street. He was hospitalized at Christ Medical Center in serious condition, police said. That came after a 16-year-old boy waiting for a friend in the 300 block of South Western Avenue was shot when police say someone in the back seat of a black Kia fired shots. The victim was struck in the thigh and brought to the hospital.

About an hour outside of Chicago, gunfire rang out at a backyard Halloween party in Joliet Township early Sunday, as more than 100 revelers fled into the street, the Will County Sheriff’s Office said. Two people, both 22, were killed, and at least a dozen more were wounded.

One of the two killed was a college student who had just gotten engaged two weeks earlier. Family members told WLS she went to the house party with some girlfriends to celebrate Halloween.