Chef, 20, is jailed for 27 years for stabbing his friend, 18, more than 100 times and gouging out his eyes in ‘sadistic’ attack after luring him to woods – then went to watch a gory horror film at the cinema hours later

A chef knifed his friend over 100 times in a ‘terrifying, sadistic, perverted and savage’ killing before celebrating by visiting the cinema to watch horror film ‘The Conjuring 3: The Devil Made Me Do It’.

Lewis Ashdown, 20, arranged to meet Marc Williams, 18, for a drink and then lured him to a remote woodland.

He got him drunk by feeding him large amounts of whisky and coke and, as the teenager was being sick, Ashdown launched his ‘merciless’ and ‘frenzied’ attack.

In a brutal attack that continued for almost 40 minutes he stabbed him 107 times, gouged out his eyes and knifed his genitals.

Ashdown used his phone to make seven videos showing himself kicking his friend in the head ‘like a football’, beating him and hitting him over the head with a tree branch.

He then went home where he spoke ‘normally’ to his mother and the following day went to the cinema with a second friend to watch The Conjuring horror movie.

The film – the third in a trilogy of horror films – describes a killer brutally stabbing someone to death while allegedly in the grips of demonic possession.

Today Ashdown stood emotionless in the dock as he was sentenced to a minimum of 27 years after pleading guilty to murder and possession of an offensive weapon. 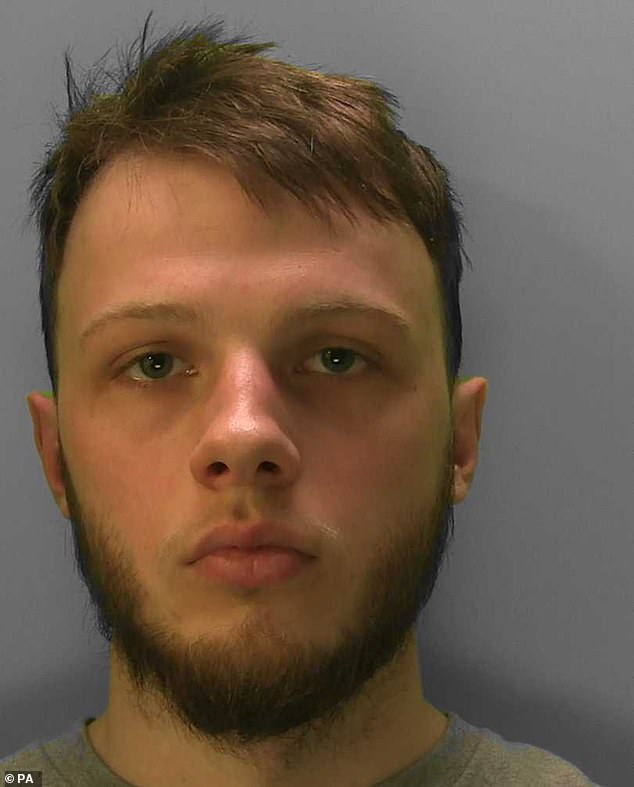 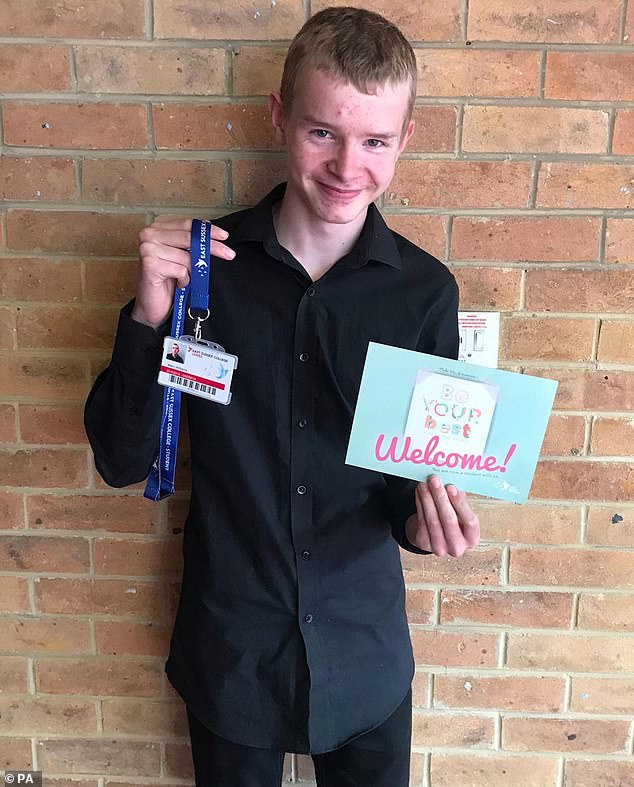 Mr Williams, who died as a result of multiple stab wounds, was found by police in woodland

The pair, who both lived in Uckfield, East Sussex became friends and they would meet up for nights out.

On May 29 the pair texted each other and arranged to meet and have a drink and Mr Williams bought beer, whisky and coke in preparation.

But when Ashdown discovered the teenager had taken his younger brother along as well he told Mr Williams he did not ‘feel comfortable’ with that and did not turn up.

Instead Ashdown texted him much later when Mr Williams was returning home and arranged to meet him in Fairwarp Field in Uckfield.

Once there he encouraged him to drink huge amounts of the whisky and coke telling him it was just coke.

Mr Williams, who lived with his grandma and aunt, quickly became paralytically drunk and then started to vomit.

He begged his friend for help saying: ‘Help, help. Can you get me an ambulance? I think I’m dying.’ 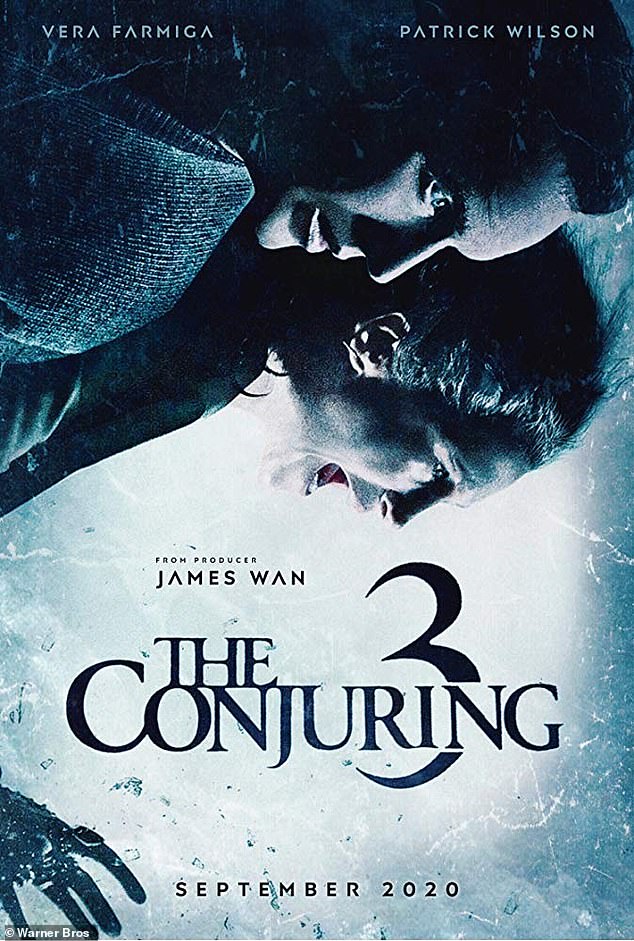 After murdering Mr Williams,  Lewis Ashdown went to see The Conjuring 3 to celebrate

At around 11.30pm he called his aunt, Emma, to tell her he was on his way home and she could hear Ashdown in the background saying: ‘Don’t worry, I’ll make sure he gets home okay.’

But the court heard that just minutes later Ashdown launched a ‘sadistic, gruesome and horrifying’ attack on his friend, first stabbing him in the back.

The court heard Ashdown then went on to stab the 7st 6lb Mr Williams 107 times in the face, eyes, neck, head, back, genitals, chest and right leg.

He pulled down his trousers and pants and dumped his body in a stream before returning home.

Both men were initially reported missing before Ashdown was ruled out and a search was launched for Mr Williams with friends and family joining police and dogs in the hunt for the teenager,

The following day Ashdown met up with a friend and they went to the cinema to watch The Conjuring 3 – The Devil Made Me Do It before playing football.

He met with his friend, Liam Hanson, again the following day and they got drunk on Jack Daniels before Ashdown made a shocking confession to him.

Ashdown told him he had killed the teenager because he had been ‘annoying’ him.

He told him: ‘I took a knife out with me. I wasn’t sure whether to do it but it felt right in the moment and I just wanted to do it.’

Mr Hanson told police: ‘He said he felt good about what he had done and Marc had deserved to die. He’d thought about killing Marc before and wanted to do it. It was horrific. He said he was glad he’d done this.’

He said Ashdown laughed as he showed him the seven horrific videos of the killing he had filmed on his phone.

‘He ripped Marc’s eyes out, proper psychotic stuff. I was going into shock. I was shocked how he came out with it. I wanted to run and tell someone.’

Later that night Ashdown was arrested by police and questioned by police but denied knowing what had happened to his friend.

In court Marc’s mother, Lena Williams, said she felt like ‘pieces of my very soul were being stripped away’ when she was told the horrific news of her son’s brutal murder.

She said he I could not believe the levels of ‘heartbreak’, ‘horror’ and ‘pain’ caused by ‘evil’ crime.

She said: ‘Marc’s life, future and dignity were taken away. He only ever wanted a friend. someone he could laugh, joke and have fun with.’

She said her son had struggled to make friends growing up and was too trusting and innocent and believed the best in people.

Mrs Williams said these qualities were capitalised on by a ‘vicious, cold killer’ and had left her trying to explain the brutal murder to his two sisters and two brothers.

In a statement read to court his father Ian Williams said: ‘What evil creature could do this to another person? To stab him so many times, then going home and off to work like nothing happened. All these actions make me feel physically sick.’

His aunt Emma Williams said she will remember his nephew for his great sense of humour and caring personality but said she will be haunted forever by hearing Ashdown saying: ‘Don’t worry I will make sure he gets home okay,’

He said: ‘The injures are chilling, terrifying and shocking and the ferocity of the violent acts is simply jaw-dropping.

‘He went to view the The Conjuring 3 -The Devil Made Me Do It which is macabre bloodcurdling and violent in nature.’

Jailing him for a minimum of 27 years, Judge Christine Laing said: ‘This is one of the savage, sustained and merciless murders and is one the worst killing this court had dealt with in some time.’

She rejected claims Ashdown had lashed out at the teenager because he had made homosexual advances towards him and claimed he killed his friend for ‘some perverted reason of your own.’

She said the teenager was a valuable member of society who wanted to live ‘a life full of interest and service to others’ and the pain felt by his family was ‘immeasurable.’