Severe floods and landslides triggered by weeks of heavy rains have killed at least 105 people in central Vietnam and “swamped” five million, according to media reports and an aid agency.

About a third of the dead included soldiers whose barracks were buried under deadly mudslides last week, Reuters news agency reported on Tuesday.

At least 27 people are still missing, the agency said. Among them are 15 construction workers who were also hit by a landslide.

Close to 690,000 poultry and livestock animals have been killed or swept away.

State television showed people sitting on the roofs waiting for aid from rescuers in Quang Binh province, where floods have blocked roads and cut power.

“I have not eaten since yesterday,” an elderly woman told VTV from her roof. “We have nothing. No food, no phone. Nothing.” 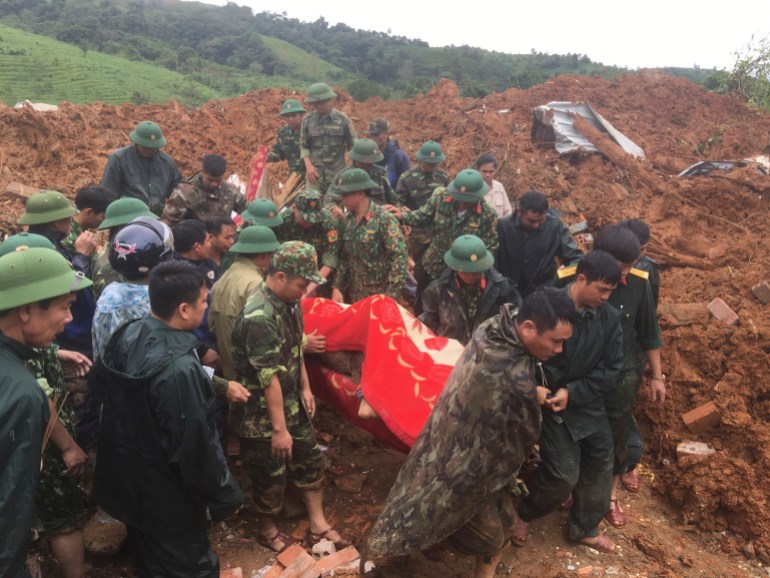 Army officers carry a body recovered from a landslide in Quang Tri province [Tran Le Lam/VNA via AP]Nguyen Thi Xuan Thu, president of the Vietnam Red Cross Society, described the floods as “some of the worst we have seen in decades”.

“They are dealing a staggering blow to the livelihoods of millions of people already reeling from hardships caused by the COVID-19 pandemic,” she said in a statement. “Everywhere we look, homes, roads and infrastructure have been submerged.”

The International Federation of the Red Cross (IFRC) said five million people have been impacted by the “catastrophic floods”, adding that hundreds of thousands were in urgent need of emergency shelter.

“These floods are the last straw and will push millions of people further towards the brink of poverty,” Christopher Rassi, a senior official at the IFRC, said in a statement.

The warning on Tuesday came as authorities in Vietnam braced for another tropical storm.

Vietnam’s weather agency said it expected tropical storm Saudel to arrive in its central region on Saturday, bringing more intense rains that could exacerbate its worst flooding in years.