Deadly wildfires in California have burned more than four million acres this year, setting a new record for the number of acres burned in a single year.

Officials announced the grim record on Sunday, saying the 2020 wildfires have now scorched a record of four million acres – in a fire season that is far from over.

The unprecedented figure – an area larger than the state of Connecticut – is more than double the previous record for the most land burned in a single year in the Golden State.

It comes in a year that has already brought apocalyptic skies and smothering smoke to the West Coast. 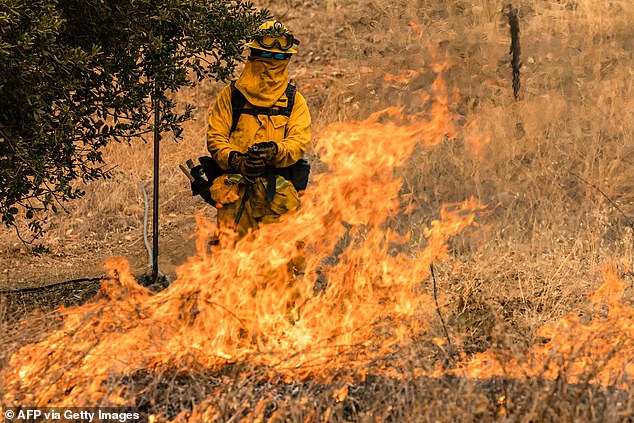 Fire officials in California said on Sunday that this year’s wildfires had burned more than four million acres in the Golden State. A spokesman for the California Department of Forestry and Fire Protection described the figure as ‘unfathomable’ 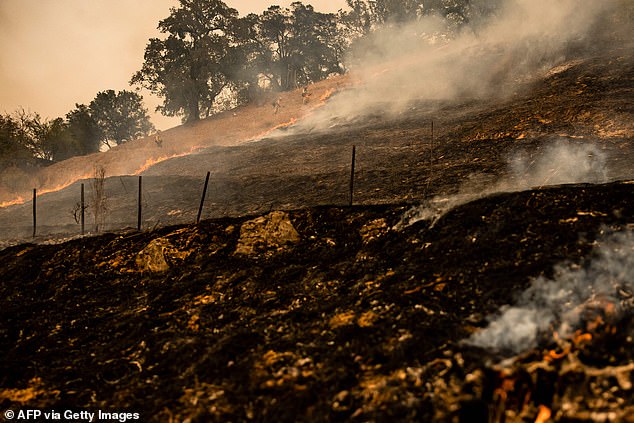 The area burned by wildfires in California this year is larger than the entire state of Connecticut and dwarfs all previous records. The four million figure is more than double the previous record of acres burned in the Golden State 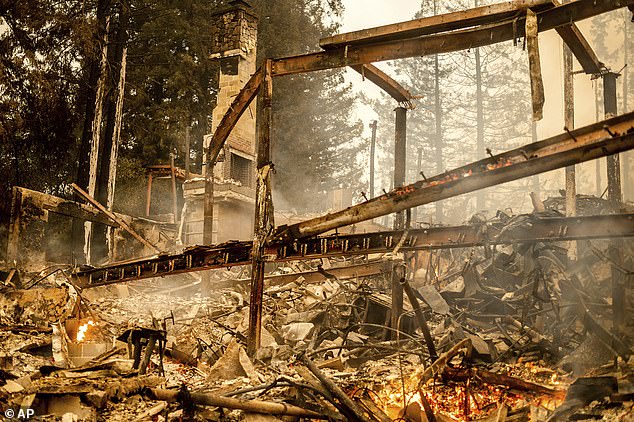 More than 8,400 buildings have been destroyed by the blazes, which have also killed 31 people. Even those living far from the flames have experienced the effects of poor air quality, smoke, and darkened skies.

‘The 4 million mark is unfathomable. It boggles the mind, and it takes your breath away,’ said Scott McLean, a spokesman for the California Department of Forestry and Fire Protection, known as Cal Fire. ‘And that number will grow.’

So far, in this year’s historic fire season, more than 8,200 California wildfires have killed 31 people and scorched ‘well over 4 million acres in California’ or 6,250 square miles, Cal Fire said Sunday in a statement.

The blazes have destroyed more than 8,400 buildings.

The astonishing figure is more than double the 2018 record of 1.67 million burned acres (2,609 square miles) in California.

All large fire years since Cal Fire started recording figures in 1933 have remained well below the four million mark – ‘until now,’ the agency said Sunday in a Tweet.

‘This year is far from over and fire potential remains high. Please be cautious outdoors.’ 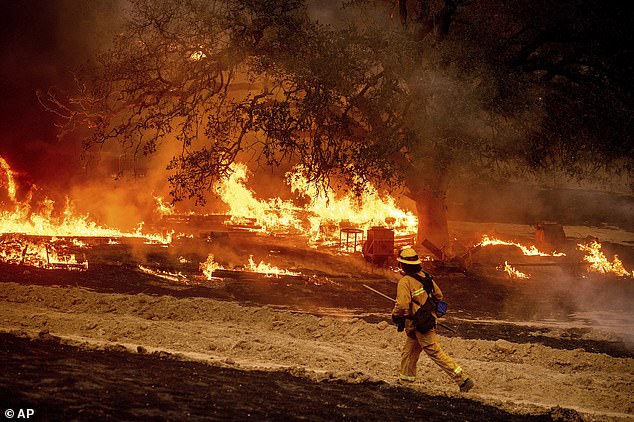 Firefighters are continuing to battle blazes across the state, which scientists say climate change and other factors have accelerated. A changing climate has made the land in California drier and so more flammable 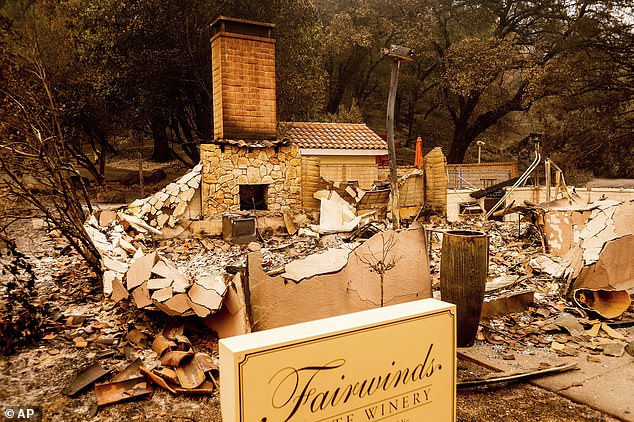 California’s famous wine country has been badly hit by this year’s fires, with many vineyards and wineries completely decimated by the flames

The enormity of the fires has meant that people living far from the flames experienced a degree of misery that in itself was unprecedented, with historically unhealthy air quality and smoke so dense that it blurred the skies across California and on some days even blotted out the sun.

Last month, a relentless heat wave hit the state that helped fuel the fires and caused so much air pollution that it seeped indoors, prompting stores across California to sell out of air purifiers.

Numerous studies have linked bigger wildfires in America to climate change from the burning of coal, oil and gas.

Scientists say climate change has made California much drier, meaning trees and other plants are more flammable.

Mike Flannigan, who directs the Western Partnership for Wildland Fire Science at Canada’s University of Alberta, says the escalation of fires in California and the US West is ‘largely, not solely, due to human-caused climate change.’

One of the blazes, located at the August Complex in Tehama County and Mendocino National Forest is the largest California has seen the state began collecting data in the 1930s.

It has consumed 970,563 acres and was described as 54 percent contained as of Sunday evening, according to the New York Post. 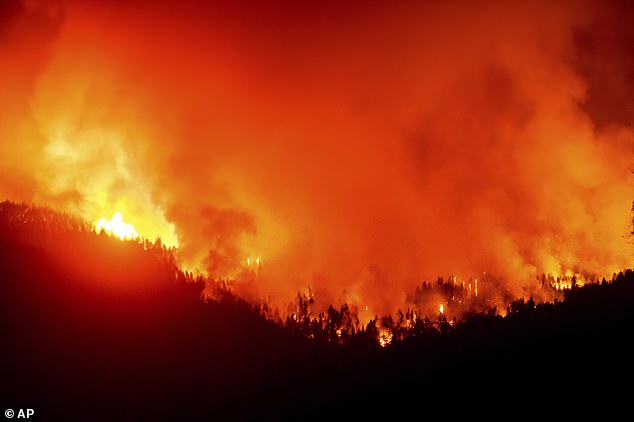 ‘There is no vaccine for wildfires’: Mike Flannigan, a fire scientist at Canada’s University of Alberta, explained that high temperatures for longer periods extends the length of fire season and warned that people will have to learn to live with the effects of extreme fires 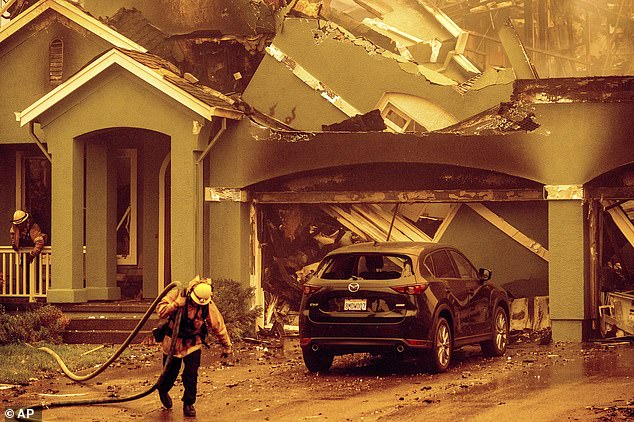 Despite Sunday’s grim milestone, there were signs for optimism.

Powerful winds that had been expected to drive flames in recent days hadn’t materialized, and warnings of extreme fire danger for hot, dry and gusty weather expired Saturday morning as a layer of fog rolled in.

‘In certain areas, we were able to get quite a bit of aircraft in. So we really pounded, a couple different areas hard with aircraft,’ Mclean said.

‘If the weather does what is predicted, we’re on that glide path I hope. But that doesn’t diminish the amount of work that still needs to be done.’

Long-range forecast models hinted at the possibility of rain early in the week. 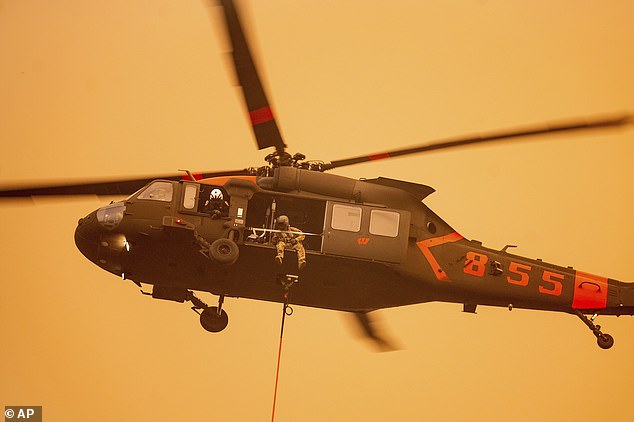 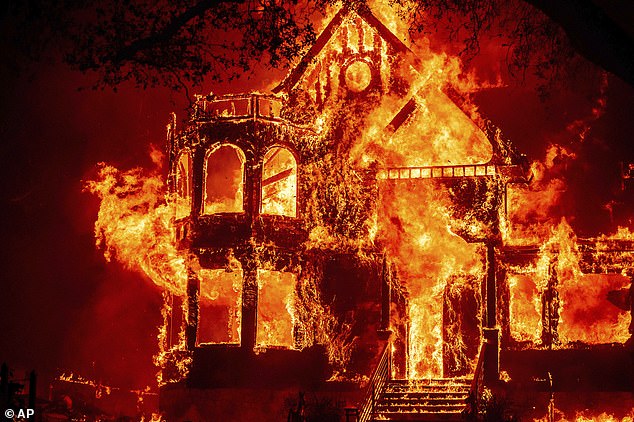 The Black Rock Inn in St Helena is just one of the buildings engulfed by the Glass Fire, which has been blazing for the past week and fire officials say is their top priority

Fire officials said the Glass Fire burning in wine country for the past week was their top priority.

Easing winds over the weekend proved a mixed blessing for firefighters battling the giant blaze, which is currently 17 percent contained.

‘We are seeing some relief in the weather, but it’s going to be three of four days before it really makes a difference on the fire,’ Cal Fire meteorologist Tom Bird said at a Sunday news briefing about the Glass Fire.

‘The one good thing going forward, we’re not expecting any wind events to push into the fire.’

The Glass Fire began last Sunday as three fires merged and drove into vineyards and mountain areas, including part of the city of Santa Rosa.

More than 30,000 people were still under evacuation orders this Sunday, down from 70,000 earlier in the week.

Among those still unable to return home are the entire 5,000-plus population of Calistoga in Napa County.

Across the state about 17,000 firefighters were at work battling nearly two dozen major blazes.

Virtually all the damage has occurred since mid-August, when five of the six largest fires in state history erupted. 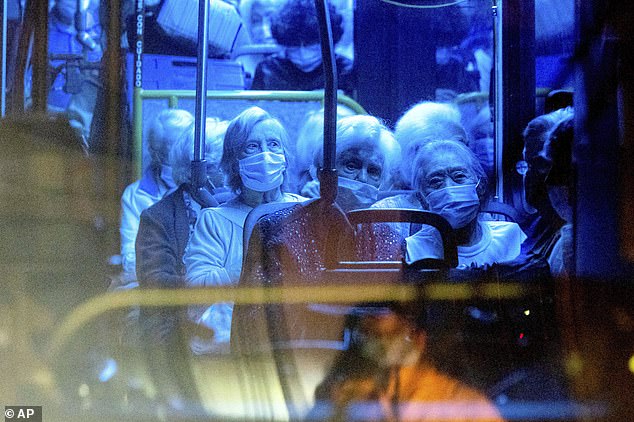 More than 30,000 people were still under evacuation orders as of Sunday night, down from 70,000 earlier this week. While some are beginning to return to their homes, residents of the Oakmont Gardens senior home were evacuated early on Monday 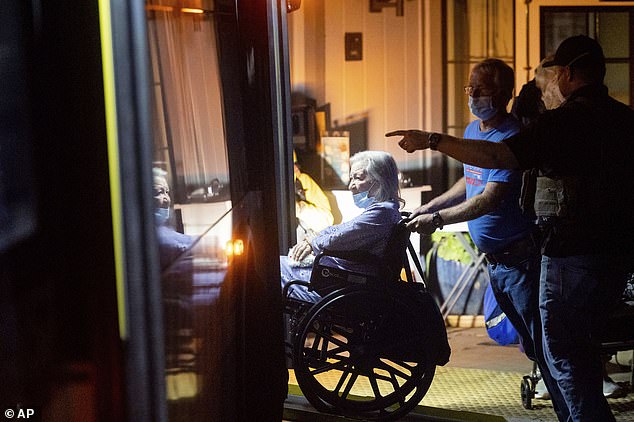 Evacuations are made more complicated by the ongoing coronavirus pandemic, which has killed more than 16,000 people in California, according to California Public Health

Lightning strikes caused some of the most devastating blazes. The wildfires have incinerated hundreds of homes and killed 31 people but large parts of them are burning in largely unpopulated land.

Many of the most destructive fires sparked in Northern California, where hills and mountains dotted with many dead trees have provided plenty of fuel for fires igniting amid high temperatures and strong winds fanning the flames.

Thick, gray smoke from the blazes has fouled the air in many hill communities and major cities in the San Francisco Bay Area and beyond.

Flannigan, the fire scientist, estimates the area of land burned from wildfires in California has increased fivefold since the 1970s.

‘This is an unprecedented year and the thing is there’s no vaccine for wildfires,’ Flanigan said. ‘We’re going to have to learn to live with wildfires and the associate smoke.’