At least seven people were killed across Burma on Thursday when security forces opened fire on anti-coup protesters, according to a report.

The deaths– six in Myaing and one in Yangon– adds to the more than 60 killed during protests after the Feb. 1 military coup, according to the Assistance Association for Political Prisoners advocacy group, Reuters reported.

“We protested peacefully,” a man who was at the Myaing protest said in the report. “I couldn’t believe they did it.”

More than 2,000 protesters have reportedly been jailed.

Protesters have taken to the streets across the country since the military ousted elected leader Aung San Suu Kyi last month. She was arrested along with President Win Myint and most members of her administration.

Demonstrators are demanding Suu Kyi be restored to power in defiance of the military’s allegations of fraud in her party’s landslide win in November. 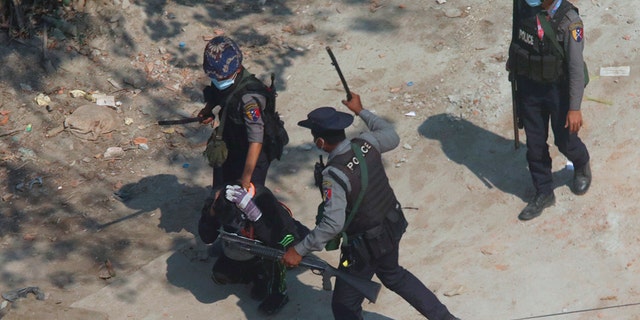 FILE – In this March 6, 2021, file photo, riot police officers hold down a protester as they disperse protesters in Tharkata Township on the outskirts of Yangon, Myanmar. (AP Photo/File)

The U.N. Security Council on Wednesday condemned the military’s violence but wouldn’t denounce the coup due to resistance from members China and Russia.