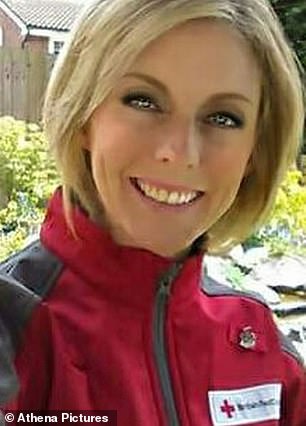 A British Red Cross worker who was honoured for her work helping victims of the Grenfell Tower fire died from hanging hours after concerns were reported to emergency services, an inquest has heard.

Dr Deborah Lamont, 44, a team leader with the humanitarian charity, had struggled with depression and anxiety for decades, which were said to have worsened after divorcing her husband.

The university lecturer was awarded the Henry Dunant Medal, the highest honour the Red Cross can give a member, after joining the emergency response team to the Grenfell Tower fire in 2017.

On Thursday, an inquest into her death was told Dr Lamont died on March 28 last year, with the medical cause of death given as hanging, hours after police and paramedics were called to a hotel following concerns for her welfare.

Red Cross colleague Jim Rees, who was in a short-term relationship with Dr Lamont, told South Wales Central Coroner’s Court he had received a string of concerning text messages from her on the afternoon before her death.

The messages included ‘at the moment life is overwhelming’, ‘I think my life should end so the pain will stop’, ‘now I think my job on this earth is done’ and ‘it’s my time’.

Mr Rees said: ‘I rang her. I was trying to say to her that she might be feeling bad now but those feelings would pass, that she had a lot to offer and people were relying on her and needed her.’

He called 999, which led to two police officers gaining access to a room Dr Lamont was staying in at the Village Hotel in Cardiff at around 6.15pm.

They found her ‘distressed’ and saw evidence of an unsuccessful hanging attempt. 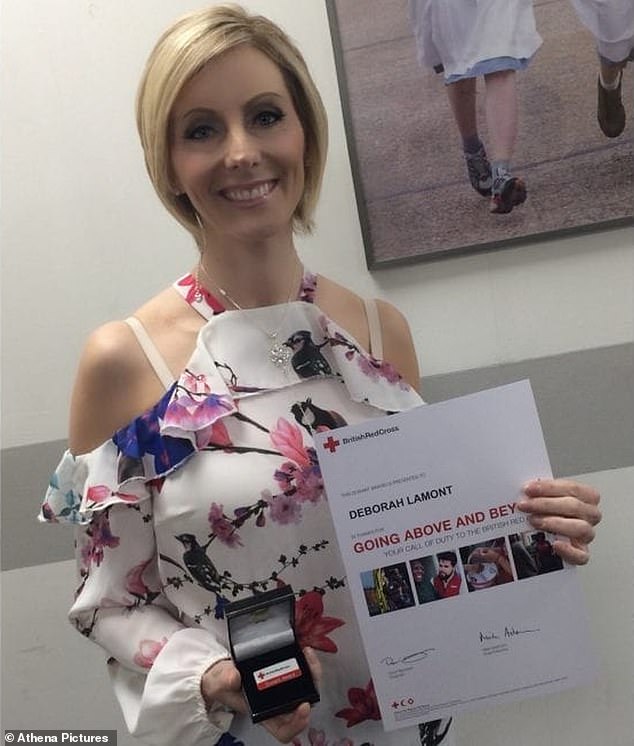 Dr Lamont, pictured with her award, received recognition for ‘going above and beyond the call of duty’ following the disaster 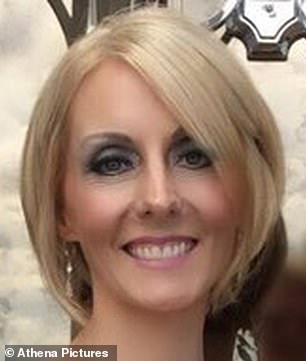 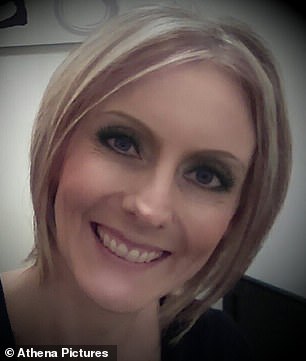 Pc Barry Simpson told the inquest he could smell alcohol on Dr Lamont and saw an open bottle of Prosecco but her mood improved ‘considerably’ after around 10 minutes before paramedics and Mr Rees arrived.

He said he believed he had no power to section Dr Lamont or take her to a place of safety under Section 136 of the Mental Health Act as the hotel room she was in was not classed as a public space.

Dr Lamont was left in her hotel room alone at around 8pm after she began engaging with mental health workers on the phone. 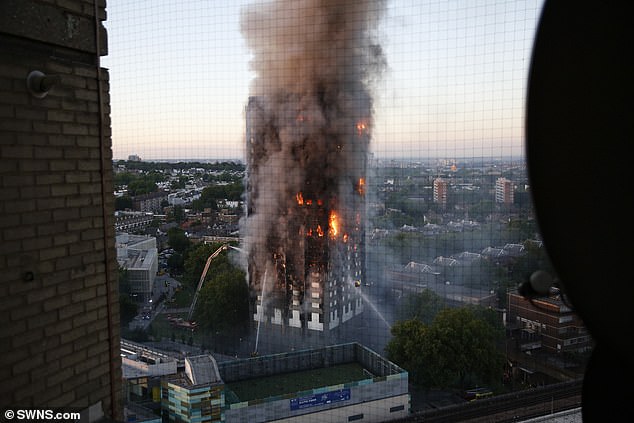 Hours after the Grenfell Tower started, Dr Lamont left her home in South Wales and took a train to London to join other British Red Cross workers to assist victims of the tragedy

Pc Simpson said he received a call around 11.30pm that evening by a senior officer who told him Dr Lamont had taken her own life.

Paramedic Olivia Horrigan said she ‘wasn’t happy’ about leaving Dr Lamont alone in the hotel room but said there were no signs of an immediate risk after she began showing remorse for her actions.

Dr Lamont, a systems and strategic management lecturer at Cardiff Metropolitan University, was interviewed in April 2018 about receiving the Henry Dunant Medal following her efforts during the Grenfell Tower tragedy.

Hours after the fire began she left her home in Dinas Powys, Vale of Glamorgan, and caught a train to London to join other Red Cross workers helping the Government and the emergency services to co-ordinate a rescue centre for those affected and the wider community.

She told Wales Online: ‘Nothing can prepare you for what you face there.

‘The atmosphere was heavy in the aftermath of the fire and a lot of the time the area was still dark with smoke.

‘The media were everywhere and people were exhausted, angry, grief-stricken and lost, and you’re trying to get them help, listen to them and calm them down.

‘It was emotionally challenging for me but I was grateful for the opportunity to help them and I am not likely to forget the scenes I saw but I would volunteer again in a heartbeat because that’s the reason I joined up.’

For confidential support in the UK call the Samaritans on 116123, visit a local Samaritans branch or click here for details