‘Britain’s worst neighbour’ mother-of-five, 37, is kicked out of Manchester estate after locals set up a petition to evict her when she smashed Audi and threatened to burn their homes down

A mother-of-five branded ‘the worst neighbour you could ever imagine’ has been kicked off a Manchester estate after furious locals set up a petition to have her evicted when she smashed an Audi and threaten to burn their homes down.

Gemma Lucketti, 37, was arrested after causing £1,500 worth of damage to a neighbour’s Audi Q3 with a hammer and knife in June this year when a feud over her anti-social behaviour turned violent.

Angry residents on the Oldfield Brow estate in Altrincham, Greater Manchester, where houses are now typically worth £400,000 each, posted a petition on Change.org demanding that Trafford Council remove Lucketti from her rundown, rented, three-bedroom semi-detached.

Calling themselves ‘The People of Oldfield Brow’, they demanded: ‘Get Gemma Lucketti evicted and stop her causing any more harm to others in Altrincham.

‘We want Gemma evicting from Oldfield Brow to ensure no more people or families endure unnecessary abuse physical or non physical. Let us live in peace in our community without fear of this woman and her actions!!!! We need to stand up to bullying as a community.’

At Minshull Street Crown Court Manchester, Lucketti pleaded guilty to three charges of possessing an offensive weapon and criminal damage. The court heard she’d agreed to move out out of the area under a ‘house swap’ arrangement.

But speaking after the court case, neighbour Korina Arden, 34, warned ‘it’s a bit premature to celebrate as we’re not sure she is in fact leaving’ and branded her ‘the worst neighbour you could ever imagine’. 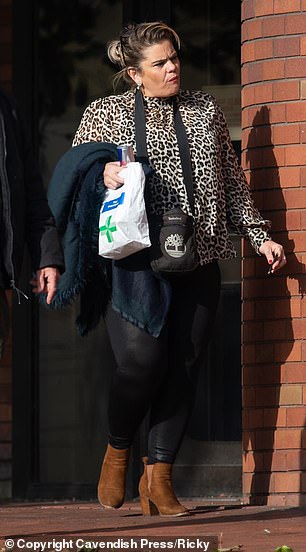 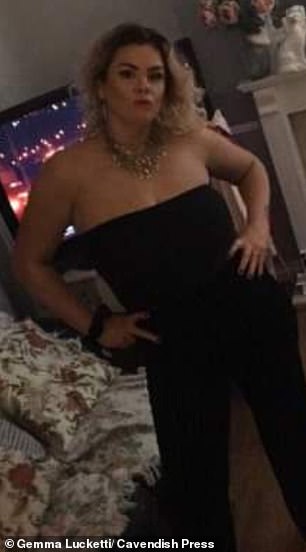 Gemma Lucketti, 37, was arrested after causing £1,500 worth of damage to a neighbour’s Audi Q3 with a hammer and knife in June this year when a feud over her anti-social behaviour turned violent 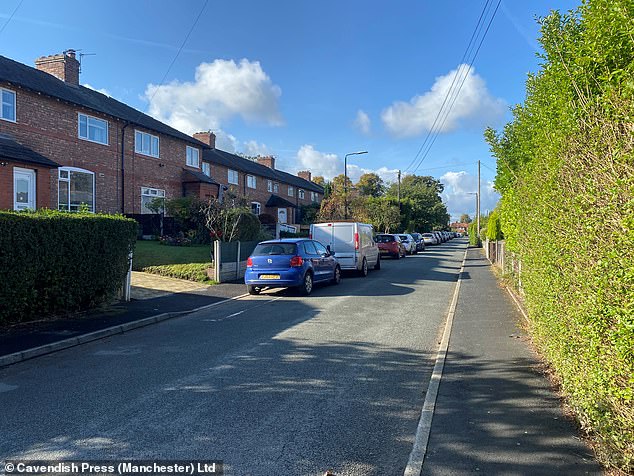 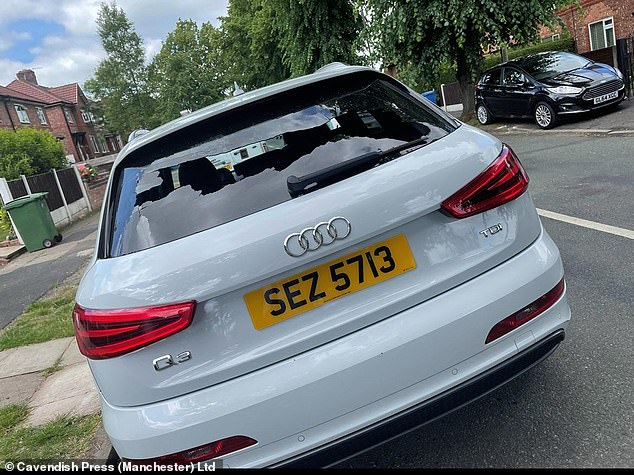 Pictured: the Audi Q3 smashed up by Lucketti in June this year

‘We don’t know who started the petition but al I know is we’re getting the blame for it and have had threats to us via social media,’ Miss Arden said.

‘I’ve had to have a 15ft fence put around my property because Gemma’s smashed my back door in. I’m not comfortable going to the local shop as I’m worried I will bump into her. I think she plays on her mental health, it’s so easy just to blame it on that.

‘I’ve spoken to a council housing officer and explained they need to do something because this is only going to escalate and it is only a matter of time before something really dreadful happens. She’s dangerous and there is no stopping her.’

Beautician Sarah O’Brien, 36, said: ‘The whole family are just a menace. Gemma’s like this with everybody. She’s a drug-fuelled psychopath and there loads of stuff she’s done where police have taken no action against her.

‘She smashed my car to Smithereens and cost thousands of pounds worth of damage. It came completely out of the blue, I just heard smash, smash, smash and I went to the window. It took four or five men to restrain her that day.

‘Despite what she says I’m sure she has probably breached her tenancy to the level that she cannot do a house swap. Everyone is going to be devastated.. There are a lot of people that are terrified of her. This isn’t a woman, she’s like a beast. She has no decorum. There’s nothing nice about her. Whenever she gets her dole money, she’s goes on a drug binge, she’ll be back.’ 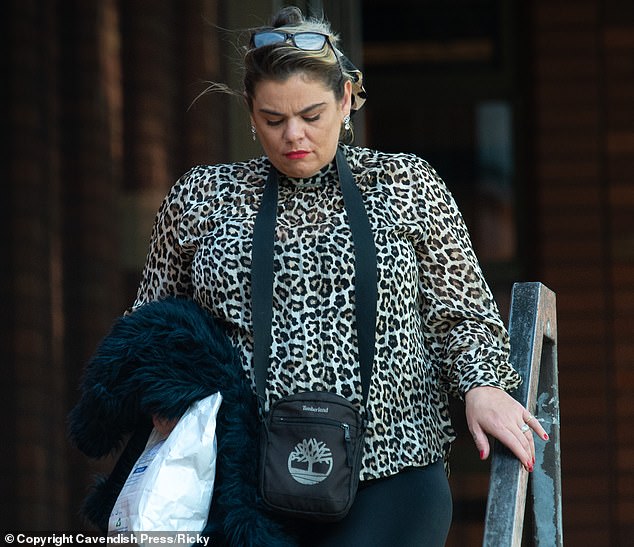 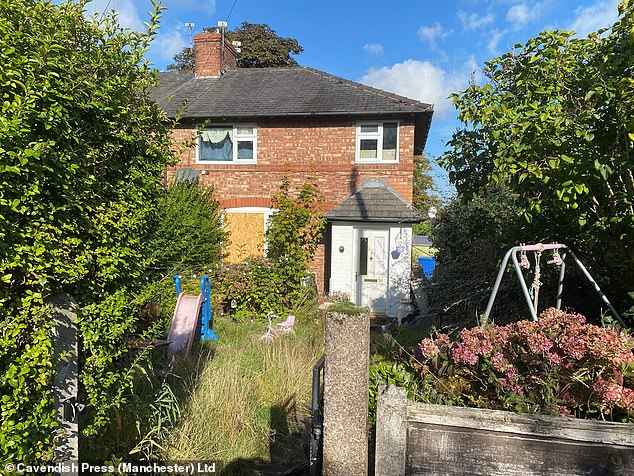 The court heard Lucketti had moved to the estate with her children in 2010 but neighbours were said to have complained about her being drunk and under the influence of drugs.

Matters deteriorated further when Miss O’Brien and her boyfriend Mark Woods moved into an adjoining property in 2016 and there were arguments over the behaviour of Luckett’s children.

Police were eventually called on June 15 this year after the feud erupted into violence and the windows on Miss O’Brien’s car were smashed.

Catherine Allan prosecuting said: ‘There has been problems over the years and incidents are worse when the defendant is under the influence of drugs and alcohol. A lot of the local residents have issues.

‘Sarah O’Brien was in her rear garden when she heard someone shouting. She recognised it was this defendant who was at the front of the property bouncing a weapon off Miss O’Brien’s Audi.

‘Mr Woods ran out to confront the defendant but she shouted ‘get off my hammer’ as Miss O’Brien rang the police. Mr Woods was trying to restrain this defendant and the hammer bounced off her car and hit Miss O’Brien in the face.

‘The defendant said ‘You are dead, you s**tbag, you are dead.’ There was a knife and a hammer next to the defendant on the floor. It was around 15 inches long.

‘The defendants daughter turned up shouting ‘Get off my Mum’. Her daughter was trying to pull her partner off her. Police then up and the defendant was screaming ‘You are all getting it’.

‘Mr Woods took the hammer out of her hands and the large knife and took it back to his car and locked the door. Police describe how she had blood on her face.

The court heard Lucketti was taken to hospital for her injuries and later made full admissions in interview. She had previous convictions for battery upon a relative and assault on an emergency worker from December 2019.

In mitigation, defence counsel Laura Broome said: ‘This defendant has a number of difficulties which she needs to get help with. There has been a difficult history between the parties. The defendant has been at that address for 11 years. Miss O’Brien and her partner moved into their address two years ago. She says the problems first started over issues relating to her children. 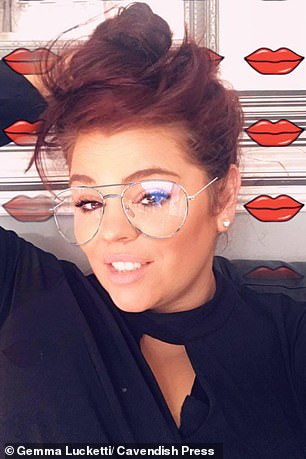 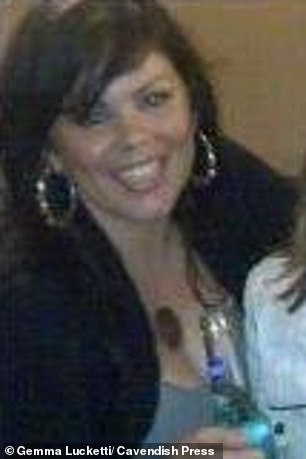 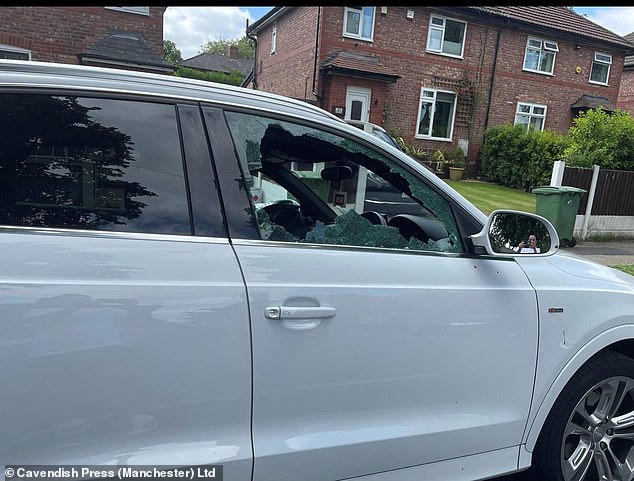 Pictured: the Audi Q3 smashed up by Lucketti in June this year

‘The defendant says she has been subject to physical and verbal abuse and has been sent threatening letters to her property. The night before her windows had been smashed and she saw red.

‘She went to the vehicle to cause damage to it and she says she was hit over the head with a hammer.

‘She accepts she approached this situation in the wrong way and would contact the police in the future if something similar arose and she would not react in a similar manner again. She regrets her actions and is remorseful and she understands the seriousness of the offences.’

Miss Broome added: ‘She has had a difficult childhood, has bipolar disorder and an emotionally unstable disorder and can experience reckless behaviour.. Her mental health deteriorated during lockdown but she is now on different medication and has now started to think much more calmer.

‘She is hoping to do a house swap to avoid any future incidents with her neighbours. She does want anything to do with these neighbours again. She has had no contact with the complainant since the offence took place and has no desire to talk to them. She is hoping to move away as soon as possible.’

Sentencing, the judge Miss Recorder Abigail Hudson told her: ‘It is extremely important that you have no contact with your neighbours before your house move. I hope that will take place soon as it is in the best interest for you.

‘On 15 Jun 2021, you were outside your home address and were damaging Sarah O’Brien’s vehicle hitting it with a hammer. Her husband came out and took the hammer off you. You had a knife in your other hand and he was trying to restrain you. You remained agitated and spat out at him. You were clearly agitated and you were injured, you had a screw driver in your possession.

‘This was premeditated. You were so determined to cause damage to her vehicle that you took three different kinds of weapons out with you. Your neighbours think you are a violent person and you were out on the street thinking in a violent way. This is a very serious offence.

‘I am acutely aware your children will be deprived contact with their mother and you have some serious mental health illnesses that you need to get to grips with. You had a profoundly disruptive reaction to certain issues and to me it seems your illness was out of control that day.’