The NHS is considering branding Britain’s coronavirus contact tracing app ‘PPE in your pocket’ when it eventually launches.

The marketing slogan will compare the app – once considered a vital part of the Test and Trace system that is now running without it – to protective equipment such as gloves and masks.

And it could also contain a Geiger counter inspired tool to warn people when they are near areas with a lot of coronavirus-infected Brits.

Barcodes for buildings, which will track where people with Covid-19 have been, and countdown timers for self-isolation periods could also be included in the app, the Financial Times reported.

Officials abandoned the NHS’s attempt at making its own app earlier this month when they realised it didn’t work on iPhones.

Software being developed by Google and Apple is now expected to be the basis for an eventual app in the UK, but this is still months away. 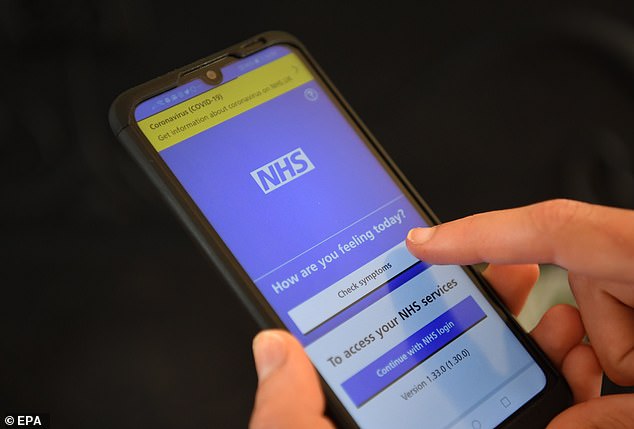 Officials abandoned the NHS’s attempt at making its own app earlier this month when they realised it didn’t work on iPhones (Pictured: The app in development stages)

The slogan ‘PPE in your pocket’ was suggested at a meeting of NHSX, the technology arm of the health service, last week, according to the FT.

It is not clear why it is being considered, but the tagline could be intended to give the public the impression the app can protect them from the coronavirus, as masks – which are real PPE – can.

Officials have also reportedly suggested a radar-like feature in the app which people could use to see which areas have had large numbers of Covid-19 cases.

The app will be linked to the NHS Test and Trace system and automatically log connections between phones, making it easier to track people’s contacts if they test positive.

This could be crucial to improving Test and Trace’s success – data last week showed fewer than half of people testing positive were actually able to give information about people they had been near while infected.

In its report last week, the Department of Health said the people who were unable to give contact details were ones who had only come into contact with complete strangers, such as on the bus.

An app would overcome this because it could anonymously link people who didn’t know each other if one of them had put the other at risk.

Another feature suggested for the app at the meeting was a barcode system in which places like restaurants or office blocks could keep track of visitors.

This could work by the barcode being placed at the entrance of the building so people who go in and out can scan it as they move through.

The system could then be updated when people test positive and visitors and employees would be able to see when an infected person had been in the building.

Officials admitted on June 18 that the NHS app, once praised by the Health Secretary as vital for lifting lockdown and described by Boris Johnson as a central part of the UK’s test and trace system, did not work on Apple iPhones.

The health service’s digital arm, NHSX, has now ditched plans to create its own app and will work with Apple and Google to improve their existing technology.

The app — which was originally promised for mid-May and the NHS spent months to develop — was unable to spot 25 per cent of nearby Android users and a staggering 96 per cent of iPhones in the Isle of Wight trial.

Meanwhile, the Apple and Google technology can spot 99 per cent of close contacts using any type of smartphone — but it cannot currently tell how far away they are, officials claimed today.

The leaders of Britain’s test and trace system said neither app is fit for purpose and Mr Hancock appeared to point the finger at Apple for the failure, saying: ‘Our app won’t work because Apple won’t change their system’.

Apple and Google announced on April 10 that they would join forces to create the technology, by which time the NHS had already started work. All parties put their software into action around a month later, in mid-May.

Developers in the NHS will now work alongside the tech giants to try and roll its detection software and the NHS app’s distance-measuring ability — which they said was significantly better — together to make a hybrid app that actually works.

The add-on features suggested at the meeting, which were revealed by two insiders, come just weeks after it was revealed that the fundamentals of the app still don’t work.

NHSX’s app, now abandoned, was unable to monitor close contacts between people if one or both of them were using an iPhone because the phone forced it into sleep mode.

And the software made by Apple and Google, according to the UK Government, is currently unable to work out how far apart people are – an essential function of contact tracing.

British officials are now reported to be working with the tech giants to develop a hybrid app using the best features from both.

They said this month that the NHS app didn’t work when used on Apple iPhones – it essentially went into sleep mode and was unable to detect 96 per cent of contacts.

Although it worked better on Android, detecting 75 per cent of phones nearby, it did not compare with the 99 per cent detection achieved by Apple and Google’s software.

That technology, however, could not tell how far away someone was and produced the same signal for people at three metres as it did for people at one metre.

The amount of time people spend within a certain distance of one another – currently two metres – is ‘mission critical’ for a contact tracing app, Matt Hancock said.

People living in apartment buildings, for example, are likely regularly within three metres of someone but not actually in the same flat or even on the same floor.

NHS bosses now say they will pool the positives of both apps to try and create one which can be used in Britain in the future, but this is likely to take months.

Baroness Dido Harding and Matthew Gould, CEO of NHSX, the health service’s digital department, said in a joint statement: ‘We have agreed to share our own innovative work on estimating distance between app users with Google and Apple – work that we hope will benefit others – while using their solution to address some of the specific technical challenges identified through our rigorous testing.’

The Labour Party said the contact tracing app, initially scheduled for mid-May, had been another fiasco characteristic of the Government’s mishandling of Covid-19.

Shadow Health Secretary Jonathan Ashworth said at the time: ‘This is unsurprising and yet another example of where the government’s response has been slow and badly managed.

‘For months tech experts warned ministers about the flaws in their app which is why we wrote to Matt Hancock encouraging the government to consider digital alternatives back in May.

‘Ministers must now urgently prioritise building a fully effective test, trace and isolate regime lead by local expertise to break the chains of transmission of this deadly virus.’

Prime Minister Boris Johnson was ridiculed last week for claiming that no country has a functioning contact tracing app, when Sir Keir Starmer, leader of the opposition, pointed out that 12million people had downloaded an app in Germany.

The PM dismissed criticism over the failed NHS software, which was initially billed crucial for controlling the disease before being humiliatingly abandoned.

Mr Johnson insisted at PMQs this afternoon that no other country had a ‘functional’ app, after Sir Keir Starmer warned that one was critical for the test and trace system – especially with lockdown easing.

But Sir Keir shot back: ‘Germany – 12million downloads… I checked that overnight.’

Fewer than half of people referred to NHS Test and Trace after testing positive for coronavirus have given any details of their close contacts, shocking data revealed last week.

In its report, the Department of Health said the people who were unable to give contact details were ones who had only come into contact with complete strangers, such as on the bus.

The staggering number suggests that an app – which automatically links people’s phones so it can alert people who don’t know one another – may be necessary for contact tracing to work perfectly.

From the infected people who have been successfully contacted themselves, two thirds of them were able to give details of one or more close contacts.

Between June 17 and the system’s launch at the start of the month, 15,225 confirmed coronavirus patients have been successfully reached by contact tracers.

But more than one in three – 5,167 people – were ‘not able’ to give details of a single person they may have come into close contact with. A further 5,062 people who tested positive could not be reached at all by contact tracers – who phone, text and email someone 10 times a day to get hold of them.

The update revealed that a total of 134,893 people – people who have tested positive, and their contacts – have been in touch with NHS Test and Trace in three weeks.

One scientist said the statistics were ‘worrying’ and could only be solved with better co-operation from the public – not by the Government. 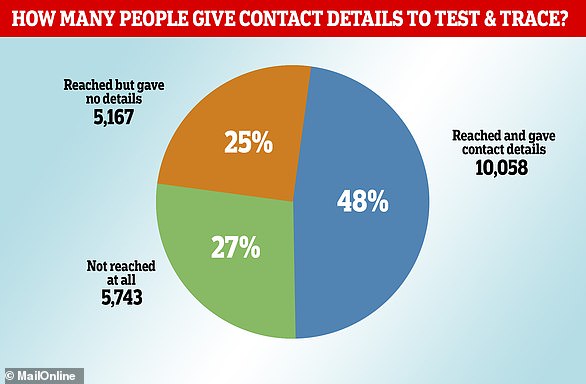 The Department of Health admitted in its report today that many people who were successfully contacted by Test and Trace, but didn’t give any details of contacts, simply didn’t know how to reach people they had been close to.

It said: ‘The number who were not able to give any recent close contacts refers to people who were successfully reached by NHS test and trace, but could not provide details of close recent contacts to pass on for further contact tracing (for example, recent close contact with strangers on the bus).’

Until last week the NHS had been working on a mobile app which would automatically record and link the smartphones of people who came close to one another.

This would have allowed technology to keep records of people’s contacts, and could overcome the obstacle of people being unable to give details of strangers.

But the app was abandoned after ‘technical challenges’ during a trial on the Isle of Wight which revealed it could only spot four per cent of iPhones nearby.

Professor Keith Neal, an epidemiologist at the University of Nottingham, said: ‘There are number of issues currently with the system – these can only be sorted by members of the public as it requires individuals to take the appropriate actions to reduce spread.’