Brazilian indigenous leader, 89, who fights for preservation of the rainforest tests positive for Covid-19

Chief Raoni Metuktire, a symbol of the fight for the preservation of the Amazon in Brazil, has tested positive for coronavirus after being rushed to hospital with pneumonia symptoms.

The nearly 90-year-old Kayapó ethnic leader does not have a fever and is breathing normally without the aid of oxygen, the Raoni Institute said Monday.

Bolsonaro alleges that such development is key to the economic prosperity of the local population and the country. 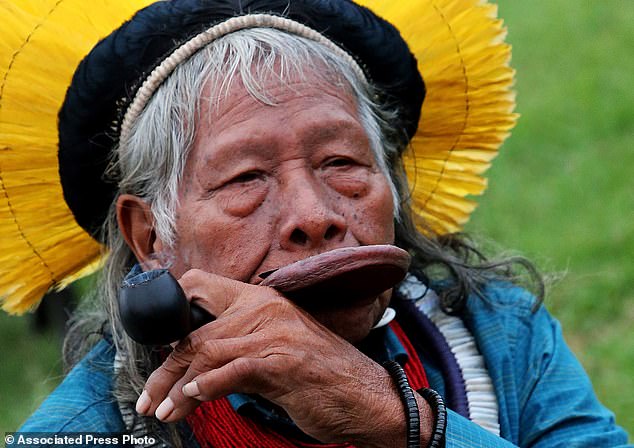 FILE – In this Aug. 26, 2019 file photo, Kayapo tribal leader Raoni Metuktire smokes a pipe after a press conference in Bidart, southwestern France. The Indigenous leader emblematic of the fight for the preservation of the Amazon forest in Brazil was hospitalized with symptoms of pneumonia and tested positive for the new coronavirus, according to the Raoni Institute on Monday, Aug. 31, 2020. (AP Photo/Bob Edme, File)

About 30,000 Indigenous people have contracted the virus and more than 700 have died since the beginning of the pandemic, according to data released by the Association of Indigenous Peoples of Brazil, a nonprofit group.

On August 4, a Supreme Court ruling forced the government to present within 60 days a plan to create sanitary barriers that protect Indigenous communities from COVID-19.

A month ago, Raoni was hospitalized for 10 days after suffering diarrhea and dehydration in his home in the Xingú Indigenous reserve, in the state of Mato Grosso.

Raoni also had low blood pressure, anemia and ulcers, and had to receive two blood transfusions.

For years, Raoni has campaigned for the protection of Indigenous territories in the Amazon.

A 1978 documentary, ‘Raoni: The Fight for the Amazon,’ contributed to his fame, as did a 1989 tour with British musician Sting.