A 13-year-old boy was seriously injured after police shot him while responding to a crisis intervention call from his mother in Salt Lake City, Utah.

Linden Cameron, who has autism, was shot several times while running away from police late on Sept. 4, his mother Golda Barton told KUTV. Barton says she had specifically asked police to send officers who could help de-escalate the situation, but one officer opened fire on her boy when he tried to run from them.

Police say the officer shot the boy “during a short foot pursuit.” The officers were responding to a call about a “violent psych issue” with a person “having a mental health episode” and “making threats to some folks with a weapon,” Salt Lake City Police Sgt. Keith Horrocks told KUTV.

Horrocks said there was no indication that the boy had a weapon, but the shooting is still under investigation.

Barton says the officers should have used a stun gun on the boy or simply tried tackling him.

“He’s a small child,” she said. “I said, ‘Look, he’s unarmed, he doesn’t have anything, he just gets mad and he starts yelling and screaming. He’s a kid. He’s trying to get attention, he doesn’t know how to regulate.’”

She says her son ran away because he didn’t want to go to the hospital. Then the officer shot him.

“I thought my son was dead,” she said. “And they didn’t tell me he wasn’t dead, and they wouldn’t let me go to the hospital for a long, long time.”

Cameron was taken to the hospital and treated for serious injuries. He is now awake and is expected to have a long recovery, Barton said. 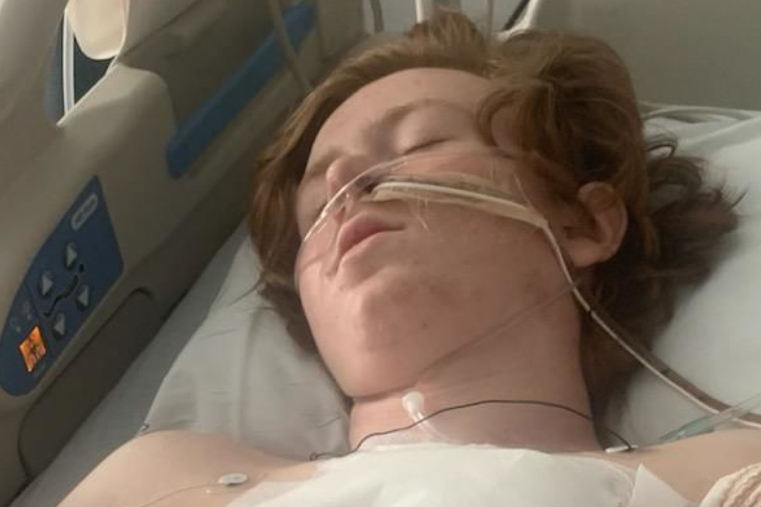 The boy suffered injuries to his shoulder, ankles, intestines and bladder, according to a GoFundMe page launched by a family friend.

“No matter the circumstances, what happened on Friday night is a tragedy, and I expect this investigation to be handled swiftly and transparently for the sake of everyone involved,” Salt Lake City Mayor Erin Mendenhall said in a statement to multiple outlets, including the Salt Lake Tribune.

“While the full details of this incident are yet to be released as an investigation takes place, I will say that I am thankful this young boy is alive and no one else was injured.”

Neurodiverse Utah, an advocacy group for people with autism, condemned the shooting in a statement.

The shooting comes after several months of nation-wide protests against police brutality in the United States. The protests started after George Floyd died in police custody in Minneapolis, but they’ve been fueled by several recent incidents and new revelations about old cases.

Earlier this week, for example, footage revealed that Daniel Prude, a naked man suffering from a mental health episode, died in New York after police put a spit hood over his head.

Kenosha, Wis., has also become a flashpoint for protests after police shot Jacob Blake, a Black man, in the back several times. Blake survived the shooting but remains paralyzed from his injuries.

Salt Lake City Police say they are reviewing body cam footage of the Cameron shooting, which is still under investigation.