Bosses of companies which make dangerous products used to build homes face jail in moves to stop a repeat of the Grenfell fire to be announced today.

A tough new body is being set up by the Government to ‘police’ the industry with the power to prosecute those who try to cheat housing safety laws.

The Construction Products Regulator (CPR) will employ a squad of ‘safety enforcers’ tasked with tracking down dangerous materials and putting rogue bosses who profit from them in the dock. 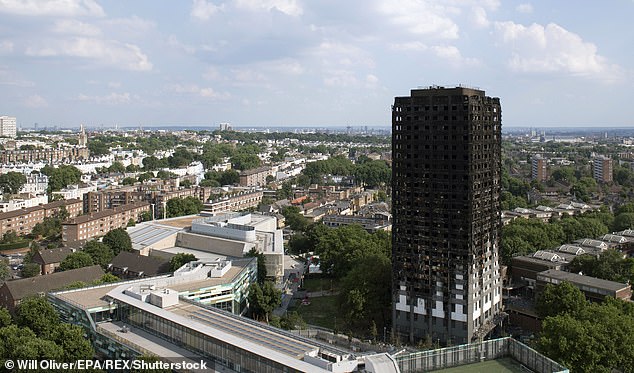 A media planner fears she will go bankrupt if she is forced to pay £43,000 to make her building safe.

Cathryn Mchale, 34, bought her one-bedroom flat in Leeds for £127,000 three years ago. She had been thinking about moving, but called it off when a safety check found her block of flats had flammable cladding.

Miss Mchale said: ‘Now my flat is worthless and I can’t move out.’

She added: ‘Everyone saw what happened at Grenfell so it’s pretty terrifying to know that a fire like that could happen here.’

It follows public outrage at evidence heard by the inquiry into the Grenfell tower block fire which killed 72 people in Kensington, west London, in 2017. It has heard how firms that made cladding and insulation blamed for fuelling the fire showed scant regard for safety – and were able to rig safety tests.

In 2015 German car giant Volkswagen was accused of fitting devices on new cars to cheat clean air laws. It was claimed they could detect when vehicles were being tested, allowing the engine to falsify noxious fumes blamed for thousands of deaths.

It has cost VW £26billion in fines and led to criminal charges against company bosses.

They will all have to pass a strict test enforced by the new regulator – and those who try to avoid it will be punished.

Mr Jenrick will also announce an investigation into how products used at Grenfell got round safety checks. The inquiry was told that a boss of Kingspan, which made insulation used in the flats, said customers worried about the safety of its product could ‘go **** themselves’. The executive also said people asking questions were mistaking him for ‘someone who gives a damn’.

A former Kingspan employee said he became ‘embroiled in a deliberate and calculated deceit to fabricate’ test results.

An ex-employee of French firm Arconic, which supplied cladding used at Grenfell, sent an email before the disaster saying material used by the company was ‘unsuitable for use on building facades’. The CPR will have the power to ban the sale of any construction material it considers unsafe and bring criminal charges against bosses who defy the rules. All building products will have to be approved by the CPR. 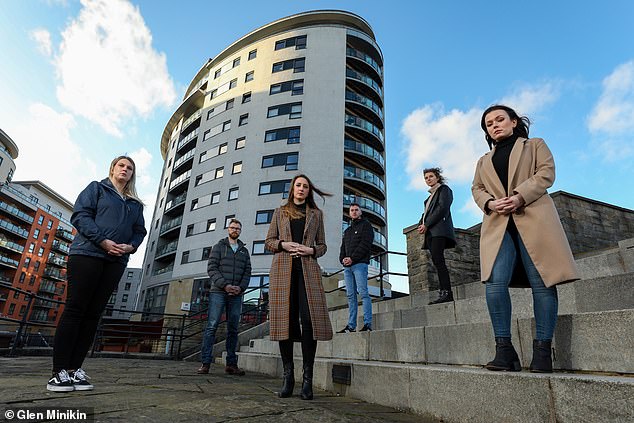 A number of people have come forward with their stories around dangerous buildings, including Cathryn Mchale (far left)

A Government source said: ‘The dishonest methods used to get round safety checks in the construction industry must stop. Flouting these regulations will be treated as a serious criminal matter with appropriate punishments. The Grenfell inquiry has revealed some manufacturers have put lives at risk by gaming the system, putting falsely advertised products on the market and refusing to take responsibility when caught in the act. We are putting an end to this.’

The CPR will take over product safety tests from the independent Building Research Establishment (BRE), which has been lambasted by lawyers for bereaved Grenfell families and survivors. They told the inquiry the disaster was the result of ‘an uncaring and under-regulated building industry’.

The lawyers claimed that the BRE was ‘manipulated’ by ‘ruthless and criminal manufacturers’, adding: ‘The testing and certification bodies provided no such protection but reinforced the dangerous and dishonest culture within the industry.

‘They were far too close to those whom they were supposed to be overseeing and far too willing to accept their misleading claims.’

Leaseholders still face paying tens of thousands of pounds to fix unsafe homes unless ministers add to plans for a levy on building firms, MPs have warned.

The Mail revealed yesterday that Britain’s biggest developers face paying £2billion over ten years as part of measures to end the building safety scandal. The move would force firms to atone for building tens of thousands of dangerous homes.

However, hundreds of thousands of leaseholders still face an ongoing nightmare as the Mail continues to campaign for action to end the cladding scandal.

They face bills of up to £115,000 to replace dangerous cladding similar to that found on Grenfell Tower in Kensington, west London, where an inferno killed 72 people in 2017.

The Government has set aside £1.6billion to fund repairs, but MPs estimate the total cost will be closer to £15billion. The £2billion levy would sit on top of the current fund – but leaseholders are liable to pay the rest.

Clive Betts, chairman of the housing select committee, welcomed the levy, but stressed: ‘The money is not sufficient.’ He said: ‘There is going to be an ongoing row now about where the rest of the money comes from. If leaseholders aren’t going to have to pay, then either the Government or the industry is.’