London: Facebook failed to address abuse of its service by foreign governments attempting to engage in political manipulation campaigns, a memo from a former employee has claimed.

Sophie Zhang, a data scientist who was sacked by Facebook earlier this month, posted a 6600-word memo on her last day at work in which she claimed the social media giant often ignored evidence of fake accounts undermining the political process. 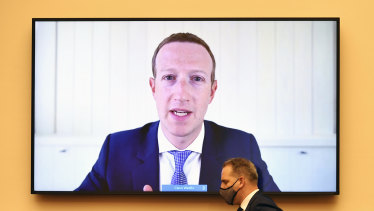 Facebook CEO Mark Zuckerberg has come under pressure for his company’s handling of issues related to politics in the real world.Credit:AP

Zhang claimed that Facebook said "human resources are limited" when she asked the company to do more to stop malicious activity around global elections, leading her to feel that she had "blood" on her hands.

"In the three years I've spent at Facebook, I've found multiple blatant attempts by foreign national governments to abuse our platform on vast scales to mislead their own citizenry, and caused international news on multiple occasions," she wrote.

The platform has increasingly faced criticism from opponents over its failure to stamp out co-ordinated activity from "bots" looking to sow the seeds of misinformation online.

Zhang gave examples of governments from countries including Azerbaijan, Honduras, India, Ukraine, Ecuador and Bolivia engaging in a range of tactics to sway the outcomes of elections or other political matters.

In her memo, she said that she and her colleagues removed "10.5 million fake reactions and fans from high-profile politicians in Brazil and the US" during elections in 2018.

"I have personally made decisions that affected national presidents without oversight, and taken action to enforce against so many prominent politicians globally that I've lost count," she wrote.

Facebook said it investigates each issue carefully, including those raised by Zhang, before it takes action. It said: "Working against co-ordinated inauthentic behaviour is our priority."

Our weekly newsletter will deliver expert analysis of the race to the White House from our US correspondent Matthew Knott. Coming soon. Sign up now for the Herald‘s newsletter here, The Age‘s here, Brisbane Times‘ here and WAtoday‘s here.