Liege: Belgium's surging second wave of COVID-19 cases on Tuesday forced it to move some severely ill patients – many on ventilators – to neighbouring Germany as hospitals reached capacity.

Helicopters started transporting the patients inside a giant transparent plastic bag connected to medical devices. Most of the transferred patients were intubated and on ventilators. 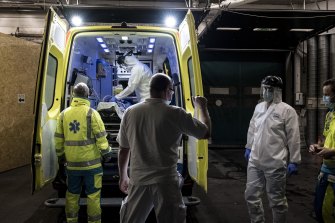 Belgium had among the highest death tolls per capita from the first coronavirus wave in March-April, and now has Europe's highest per capita number of confirmed new infections, according to the European Centre for Disease Prevention and Control.

The country of 11 million people has 7231 COVID patients in hospital, 1302 of them in intensive care and local hotspots, such as the eastern city of Liege, have seen the capacity of intensive care beds being reached.

A trip such as to the German city of Muenster would take at least three hours by road, but can be done up to three times faster by air, and with fewer shocks to the patient such as from road bumps.

Martin Kotthaus, Germany's ambassador to Belgium, said a mechanism had been set up to allow Belgian patients to transfer to hospitals in the German state North Rhine-Westphalia, where there is more spare capacity.

"In the first wave, Germany had more than 230 patients from Italy, France and the Netherlands. Now we are extending our help to Belgium," he said. "But in the future, it might be Germans who would have to come to Belgium."

Elsewhere in Europe the news was similarly bleak on Tuesday.

"We have a very serious situation," Lofven said. "More and more intensive care beds are now being used to treat COVID patients. The respite we got this summer is over."

He also said parties at restaurants would be limited to eight people.

Sweden has seen a surge in new infections in recent weeks, surpassing peaks set in the spring, though levels are not as high as in countries like Belgium, Spain and France relative to the size of the population.

Greece also expanded its restrictions, extending a night curfew on movement and shutting restaurants, bars, theatres and museums for one month.

The country, which had fared better than many of its European neighbours due to an early nationwide lockdown during the first wave, has reported fewer cases than most in Europe.

But it has seen a gradual increase in infections since early October and has been reimposing restrictions.

Some Greeks believe the new rules will hurt economic activity in a country that recently emerged from a decade-long debt crisis.

"If we implement the measures we will be able to be more optimistic in December," Petsas told Skai TV.

France could reimpose a night curfew on Paris amid government frustration that too many people are ignoring the nationwide lockdown rules. 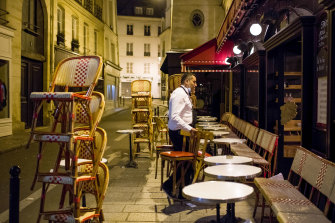 French cafes and restaurants are closed under the latest nationwide lockdown. Residents are only meant to leave their homes for “essential” purposes.Credit:Bloomberg

"It's unbearable for those who respect the rules to see other French people flouting them," government spokesman Gabriel Attal told BFM TV. "We need to take all the steps needed to fight the epidemic."

A new curfew will be discussed at a meeting between President Emmanuel Macron and senior cabinet ministers on Wednesday, a government source said.

New COVID-19 lockdowns and curbs have stirred resistance across Europe even as countries including France and Spain deal with record daily infections and hospitals buckle under the strain.

"The police have observed clandestine parties, raves, private dinners, even though the virus is spreading rapidly," a government source said.

In Paris, one person was becoming infected every 30 seconds, while a Parisian is admitted to hospital with the disease every 15 minutes, according to Health Minister Olivier Veran.

Understand the election result and its aftermath with expert analysis from US correspondent Matthew Knott. Sign up to The Sydney Morning Herald‘s newsletter here, The Age‘s here, Brisbane Times‘ here and WAtoday‘s here.