Puffing Billy’s whistle piercing through the chilled mountain air is a comforting sound for Dandenong Ranges locals who have endured a week of hell.

The beloved steam train fired up on Saturday morning for its first Belgrave to Emerald run in three weeks after the statewide lockdown and then a storm nine days ago which inflicted unprecedented damage across many parts of the state. 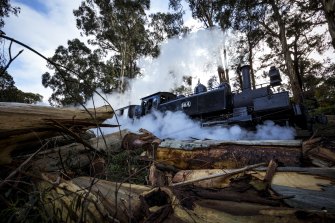 But while life returns to some semblance of normal and tourists can now travel to Belgrave, Emerald and Gembrook, a 20-minute drive away behind police roadblocks are communities living among destruction that is anything but normal.

Although many roads around Olinda, Sassafras, Mt Dandenong and Kalorama, in Melbourne’s east, have now been cleared of trees, they remain treacherous.

Nine days on from the storm, thick, black electrical wires still snake across roads and hang eerily from branches.

Red and white tape marks the dozens and dozens of trees deemed at risk of toppling at any moment.

Power is slowly being returned to properties, but the worst affected locals are facing at least a three-week wait for power – with some expecting it could be longer.

Bed-and-breakfast owners Michaela Pascoe and Ulf Johansson are trying to work out how they will pay their mortgage with no income from tourists for the forseeable future. 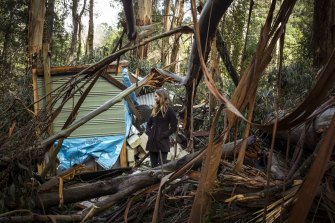 Michaela Pascoe surveys the damage at her bed-and-breakfast property in Mt Dandenong.Credit:Chris Hopkins

Ms Pascoe holds back tears as she describes how their mountain retreat had only been operating for a month when the lockdown cleared the couple’s bookings.

Then the storm crushed a studio, brought down dozens of massive trees and took the roof off one of the three guest cottages at the Mt Dandenong property, cutting off power and water.

“There’s been lots of moving between crying and being very angry,” she says.

“We’re a new business, we haven’t had a financial year, so we haven’t registered for GST, so it didn’t qualify for that [financial] relief.”

Ms Pascoe drove four hours to find a generator – one of the only ones left available after the storm in Coolaroo – but it doesn’t provide enough power for the couple to live on the remote property. They’re staying between friends and family for now.

Even if the power is restored, Ms Pascoe is worried the roads will not be safe enough to welcome tourists anytime soon.

“I imagine that as more of the clean-up happens, they’ll probably find that it’s going to take even longer.”

As the ADF begin to arrive to help with the clean-up effort, the community has mostly been caring for itself.

While a refuge centre set up at Kalorama is providing locals with hot showers, free meals, Wi-Fi and mobile clothes washers and dryers, in nearby Olinda Heather Hick is running a makeshift welfare centre out of her cafe. 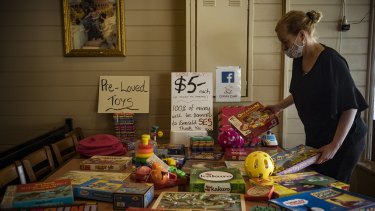 Heather Hick is running a makeshift welfare centre out of her Olinda cafe.Credit:Chris Hopkins

Olinda Cafe has been giving out free coffees for locals and Ms Hick is raising money for the local Country Fire Authority and State Emergency Service by selling her children’s old toys.

But beyond the warm cuppas and loose change, she’s most concerned with keeping her cafe open for the elderly locals who have no power and no heating in the bitter winter weather.

She says many of them are not asking for help, so she is going out of her way to organise food and generators for them.

“My job at the minute is just trying to convince those people that there’s help out there,” she says.

“I’m more focused on the community, looking after them.”