BBC Weather presenter Tomasz Schafernaker explained the UK will be struck by showers up and down the country. He added some of these downpours may bring thunder and lightning as well as hail showers. Going into Monday and the new week he said the wet weather would continue as some parts of the UK would see rain throughout the evening and wake up to showers.

Mr Schafernaker said: “Shower clouds have been moving in and you can see they are affecting many western and southwestern parts of the UK.

“Showers are relatively small and are carried in by an increasing breeze, they could be five miles across, 1 mile across even less than that.

“Exactly where they go is difficult to say.

“Some of them will bring hail thunder and lightning today and that is possible almost anywhere. 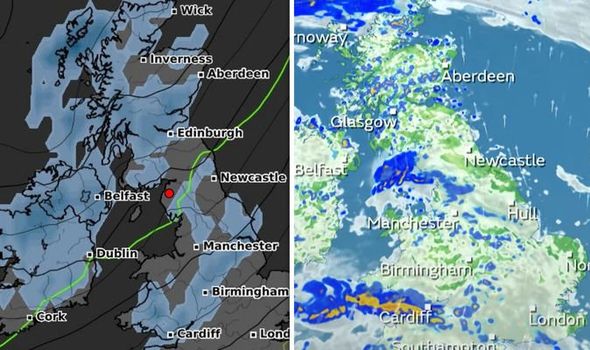 “You will keep the fine weather for longest for a little while across the eastern parts of the UK.

“In the west, the showers will be blown in by that breeze.

“I think it will be a wet end to the day and start to the evening in Belfast as Glasgow and Edinburgh getting some rain too. 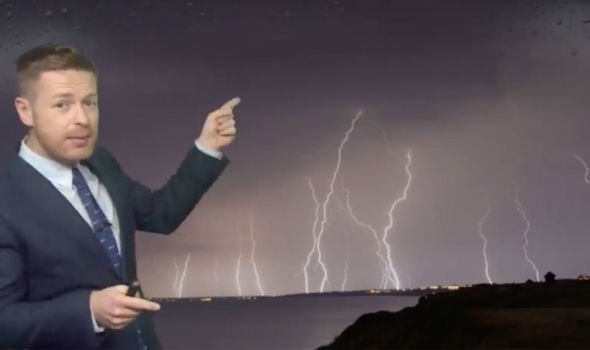 “It looks like it will be raining in the Lake district this evening as well.

“Across central, eastern and southern areas Sunday night going into Monday it is going to be dry and around 13 degrees in the bigger cities.

He closed by saying the low pressure bringing the showers today will also be affecting the weather on Monday especially northwestern parts of the UK.

He added Northern Ireland and Scotland can expect frequent showers early into next week, also seeing some hail and thunder.