BBC weatherwoman Carol Kirkwood predicted heavy rain spells as 200ml are expected to fall in Scotland and Northern Ireland and as we head into the evening and overnight the weather front of rain will continue to push Northwards. Ms Kirkwood predicted windier conditions as speeds pick up and the weather becomes unsettled. The Met Office has issued a yellow weather warning in Scotland due to the torrential downpours.

Ms Kirkwood said: “If you’re just stepping out it’s a mild start to the day for this stage in October, 17 degrees for some of us already.

“Now as we go through the next few days the weather is going to be unsettled, it is going to be windier than it has been and we’re also looking at spells of rain.

“Not so much rain in the South-East but a lot of rain across the North-West.

“And you can see in this chart the amount of rainfall that we’re expecting in the next few days. the key is up here there is not a lot to start within the South-East. 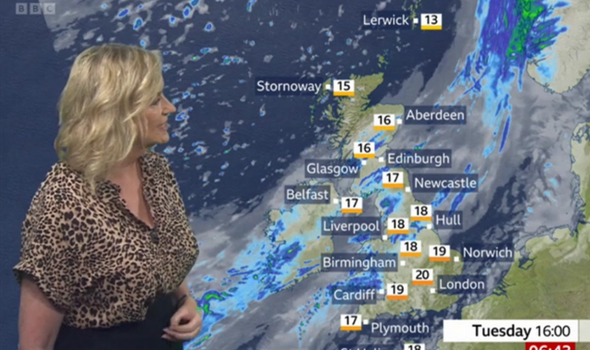 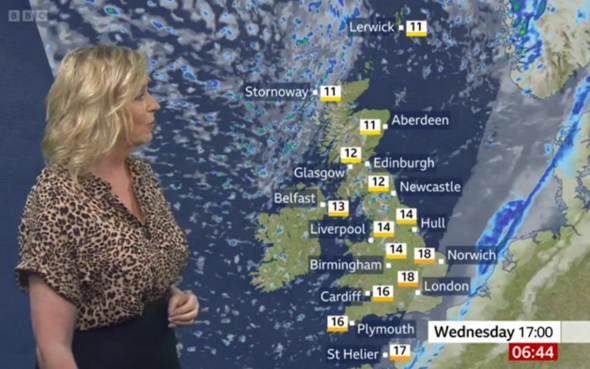 Ms Kirkwood added: “Eventually we see some but not much, whereas if we push up towards the North-West of Scotland here we’re going to see a fair old deluge, could have some flooding issues with this.

“Now we’ve got rain this morning already across parts of Scotland and Northern Ireland, some of this is heavy and persistent.

“And it is going to be sweeping Southwards as we go through the course of the day, getting into parts of England and Wales.

Ms Kirkwood said: “Currently it is mostly dry there is a fair bit of cloud around and we’re looking at one or two showers.

“It is actually two weather fronts, the first one slowly moves South-Eastwards the second almost grinds to a halt across parts of Scotland and Northern Ireland.

“But it will brighten up across the far North, the other thing you will notice today is it’s going to be windier more widely than it was yesterday.

“But temperatures 13 to 20 degrees, the average at this time of the year is roughly 14 to about 18 in the London area. 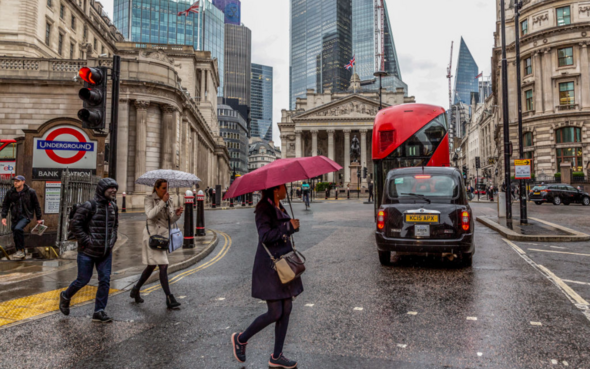 Ms Kirkwood added: “Now as we head on through the evening and overnight if anything our weather front starts to move Northwards.

“We see a little area of low pressure develop, and once again we’re looking at some heavy rain.

“The winds picking up, especially across England and Wales and then we’ve got another two weather fronts coming our way.

“It is going to be a mild night as well.”