The cold weather will be courtesy of a new area of high pressure coming from the north-east which will gradually sweep away the area of high pressure that brought the country warm African air in the past few days. BBC Weather forecaster Nick Miller warned Scotland, northern England and Northern Ireland will be the first to feel temperatures plummet throughout the course of Wednesday before wet and cooler weather reaches all parts of the country on Thursday.

He said: “It will feel much cooler on Wednesday, the reason is we will lose the high pressure that brought the warm air from the south, replacing it with another area of high pressure coming from a cooler direction, the north-east into those North Sea coasts on Wednesday.

“We also have a weather front moving south with clouds, not a huge amount of rain.

“Before that completes its journey southwards though, a rather warm start to Wednesday morning for many of us. A little cooler by Thursday morning.

“With that weather front, clouds and a few spots of light drizzle for parts of Scotland, northern England and maybe Northern Ireland pushing further south through the day.” 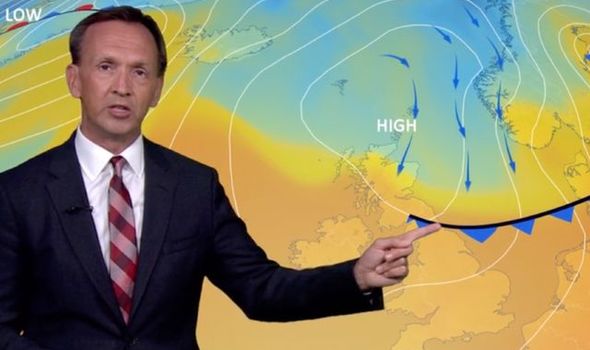 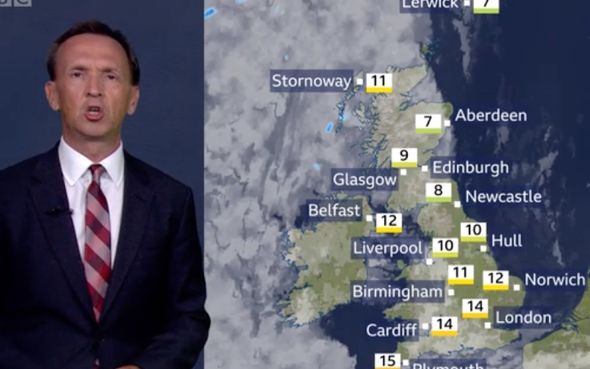 The Met Office has issued a level 2 heat alert until 9am on Wednesday for parts of England.

The warning read: “The concurrent risks associated with COVID-19 are likely to increase the health impacts of high temperatures.

“A short period of unseasonably warm temperatures is expected, with temperatures approaching, and potentially exceeding thresholds in isolated spots.

Cooler air is set to sweep in with cloudier skies bringing a frost to parts of the UK.

Deputy Chief Met Office Meteorologist, Chris Tubbs, said: “Thursday and Friday will be fine and dry for most as high pressure remains close to the UK.

“Whilst it’ll be cooler for northern areas with temperatures close to normal and the chance of frost in rural spots overnight, it’ll stay warm in southern and eastern parts of the UK with temperatures staying in the low to mid-20sC into the weekend.”

But maps from WXCHARTS show a heat plume sweeping over from the Atlantic in a westerly direction as October arrives. A high pressure system will also be pushed towards southern areas of the UK during the beginning of next month, meaning there will be “a fair amount of sunshine” according to Netweather.

Temperatures will also be 2C above average during October, forecasters claim. 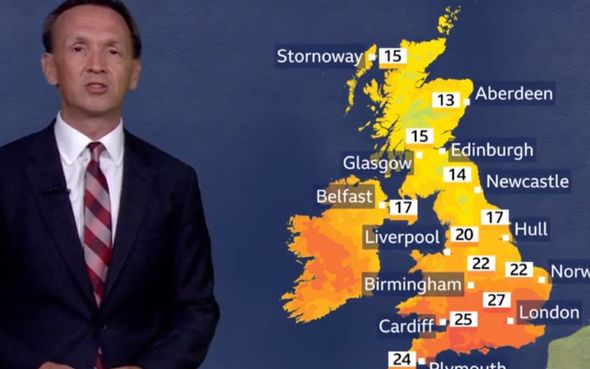 Netweather’s long-range forecast said: “Into early October there is an increasing chance of high pressure pushing in from the south and bringing mostly settled and warm weather, probably with a fair amount of sunshine for most, and a likelihood of more changeable weather holding on in the north and west of Scotland in particular.

“Temperatures will tend to be close to or just below the long-term seasonal norm early to midweek, with some cool nights midweek as the high pressure moves in and some fog patches in places, but will tend to rise above normal late in the week as there is a significant chance of southerly and south-westerly winds setting in.

“Mean temperatures are thus expected to be a little above normal overall, but only by 1C or less in most parts of the country.