May Bank Holiday: UK set for frost as temperatures drop

BBC Weather forecaster Matt Taylor said May will start off on a frosty note as low temperatures will continue to plague most of Britain in the early hours of the weekend. Sparse rain intermixed with sunshine will remain the main feature throughout Friday. Daytime showers will slowly ease going into the evening, with long clear periods overnight but patches of mist and fog may develop.

Mr Taylor said: “Like recent days, shower clouds are going to pop up and there’s more on the way of substantial rain.

“This area of cloud out in the West Atlantic is pushing towards us in time for Bank Holiday Monday. There’s some wet and windy weather.

“Out there at the moment, the speckled nature of the cloud indicates there are showers around. It passes southeast Scotland, eastern counties of England where the showers are heavy.

“Some hail, some thunder,  a bit of sleet and snow on the higher ground. One or two showers dotted around elsewhere. Most start the day dry but, like yesterday, the cloud build, spread out a little bit and then heavier showers develop.” 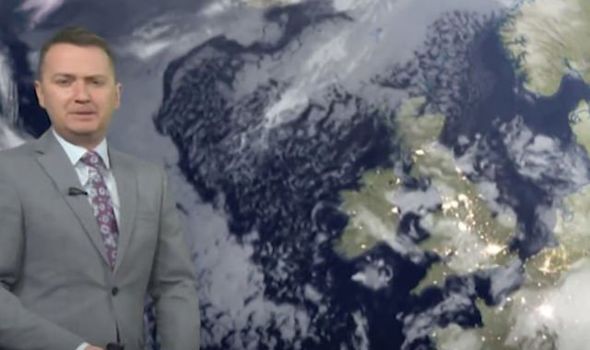 The BBC Weather forecaster continued: “Parts of Wales, parts of England prone to some of the heaviest ones later. Slow-moving light winds.

“In-between though, temperatures 13C or 14C, a chilly day down those eastern coasts, around 7C to 10C the highs.

“The rain will rumble on into the evening before gradually fading overnight and, with clear skies around, light winds, we go into the first day of May with yet another frost.

“A chilly start to tomorrow, another frost on Sunday morning too. The weekend will be a story of sunshine and showers.”

The Met Office has warned conditions are expected to remain unsettled into next week, with an increased likelihood of stronger winds and persistent rain.

The long-range weather forecast read: “Showery conditions could well occur between these unsettled spells, with showers developing fairly widely most days due to a cold northerly wind, though many areas will see some sunny spells too.

“Showers are likely to fall as snow over high ground in the north. Nights will remain cold with some overnight frosts, though these becoming more restricted to the north.

“Temperatures look to remain below average overall, with any milder spells being associated with rain and strong winds so not actually feeling overly warm. By the end of the period, there are slight signs that temperatures may recover.”

Netweather meteorologist Nick Finnis added wet and windy weather could push over from the Atlantic over the coming days.

“And there’s more rain to come in the coming days, mostly in the form of showers for the rest of this week and through the weekend, though not everywhere will catch one.

“But through next week the jet stream looks to power up across the Atlantic and take aim at northwest Europe, bringing a few deepening depressions towards the UK and with it spells of wet and windy weather.