Speaking to BBC Breakfast viewers, the weather forecaster warned heavy rain will hit most of the UK with the exception of south-eastern England today. Mr Taylor added winds will begin to pick up overnight and throughout the weekend, hitting up to 40mph for some on Sunday. He said: “The rain this morning is quite excessive across Scotland, northern England, north of Wales, coming and going in Northern Ireland as well.

“A soggy start to Friday. Driest to the south and Shetlands, it should be a fine day here.

“But the rain is going to fall all day long in those places that started wet. We will see a little bit more rain at times across eastern England.”

He added: “For the southern half of Scotland temperatures will hit 15C to 16C and particularly for southern areas the rain is going to be fairly relentless today, with a risk of minor flooding later.”

Over the weekend, Mr Taylor warned of winds picking up overnight. 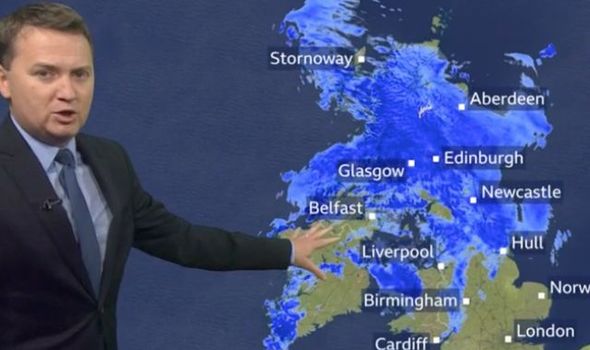 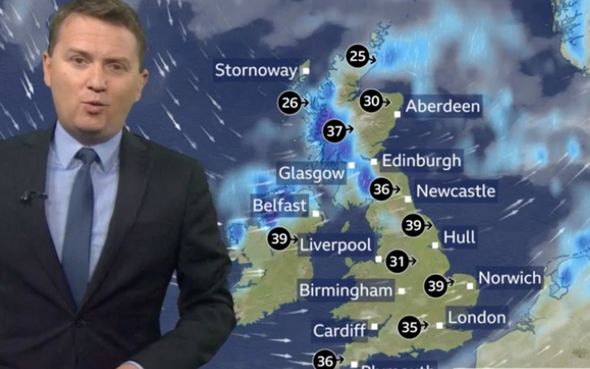 He said: “It will be a bit breezier as we go through Saturday, particularly later on.

“That cooler weather will be working its way down into Sunday.”

Rain and cooler weather have swept the UK of late, with temperatures barely reaching 20C for much of the country.

With rain warnings in place for parts of Scotland, some may be wondering when the hot summer weather will return to the UK.

The Met Office has cautioned heavy rain will fall over Central, Tayside and Fife, SW Scotland, Lothian Borders and Strathclyde on Friday and Saturday.

Showers have hit much of Britain this week, with intermittent but heavy rain in places, cloudy skies and a much cooler feel than last month.

In June, highs of more than 33C were recorded at Heathrow, before temperatures plummeted to the low 20C and cooler.

However, conditions could be improving, with weather maps showing hot conditions in July. 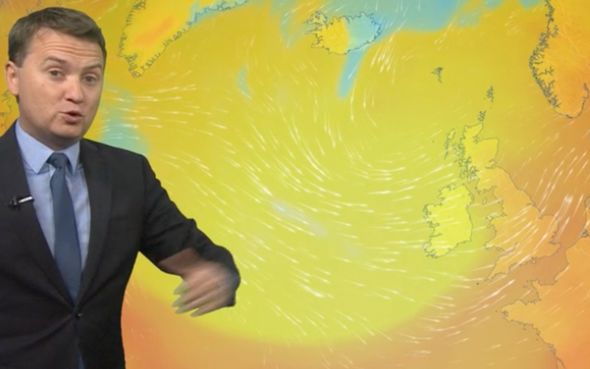 This will be a welcome change for many, as the Met Office predicts showers across England and Scotland this week, with strengthening winds and cloudy skies for the weekend.

The Met Office long-range forecast for Tuesday, July 7 to Thursday, July 16 predicts a period of “more settled” conditions, with high pressure exerting “dominance” across the UK.

The long-range forecast reads: “Whilst scattered showers, or even spells of rain with strong winds, will continue to affect the west, and perhaps the whole country at times, these are likely to be fewer and further between than of late.

“Such spells look likely to become increasingly confined to the northwest as we go later into the period.

“Temperatures will remain around average for the time of year; often rather cool in the north and in more unsettled spells, to rather warm, or even locally warm and humid, in drier, sunnier weather in the south.”