BBC ‘terrifies’ the elderly with ‘threatening’ licence fee letters warning viewers of a £1,000 fine if they do not stump up the £157.50-a-year cost

The BBC has been accused of ‘terrifying’ the elderly with ‘threatening’ licence fee letters warning viewers of a £1,000 fine if they do not pay the £157.50-a-year cost.

Social media users complained online after receiving the letters, which are emblazoned with red capital letters and informed recipients they could face prosecution.

The letter reads: ‘Our records show your property has no TV licence. I visited today, to find out why.

‘You have not replied to our letters. So my visit today was the next stage of the official investigation into why your address doesn’t have a TV licence.’ 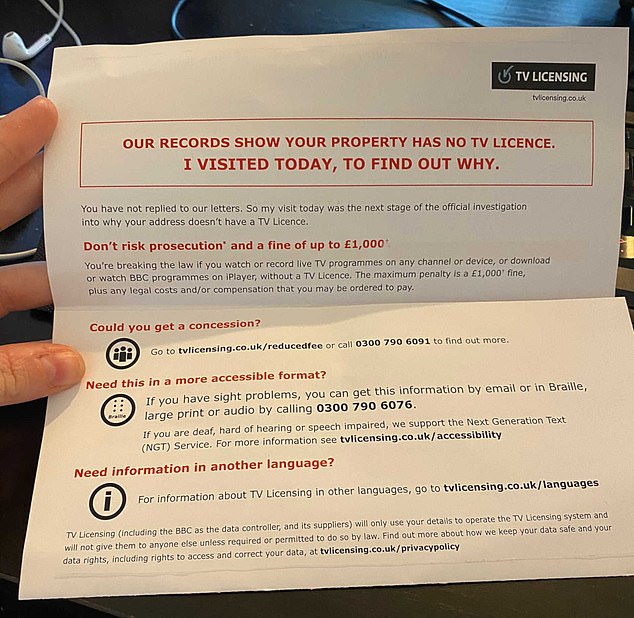 The letter, emblazoned with red capital letters, reads: ‘Our records show your property has no TV licence. I visited today, to find out why’, before warning viewers of a £1,000 fine The outside of the letter, reading ‘please do not ignore’ in red capital letters, in a picture posted to social media by engineer Britney, 28, from Glasgow

It then goes on to detail the potential fines and prosecution the recipient could face.

Among those to complain was engineer ‘Britney Beers’, 28, who shared a picture of the letter on Twitter yesterday.

Britney, from Glasgow, owns a TV but says she does not watch BBC shows.

She uploaded her letter to social media and wrote: ‘Absolutely f***ing wild how threatening the TV licence letters are.’

Another Twitter user also posted: ‘My parents (88 years!) have just received your threatening letter demanding they set up a direct debit to pay their licence fee.

‘They are now highly stressed as they don’t know how to do this! I do hope you are proud of the stress you are causing our parents.’

A third added: ‘My elderly mother with dementia received her licence letter this morning. Petrified and in tears, worried sick about the fee. I am so not.’

A fourth person complained: ‘Thanks for sending a really threatening letter for cancelling my direct debit, even though my licence is paid for and valid until April 2021.

Social media users, above, complained online after receiving the letters, which are emblazoned with red capital letters and informed recipients could face prosecution

‘There’s thousands of people losing their jobs at the moment.’

Speaking today, Britney said: ‘I don’t like answering the door to people I don’t know or not expecting if I’m in on my own. The man knocked and then posted that through the door. It’s also intimidating.

‘I was surprised at how threatening it is, I didn’t expect them to be as demanding as that and since the recent change making pensioners pay for it, it would scare them. It’s so threatening.’

If enquiry officers suspect that BBC or iPlayer programmes are being watched without a licence fee, they may pay a visit to your home.

They cannot enter the premises, but may apply for a search warrant in order to do so.

On Sunday, it was revealed that the company responsible for collecting the licence fee made an embarrassing mistake that allowed hundreds of elderly people to pay a weekly direct debit. 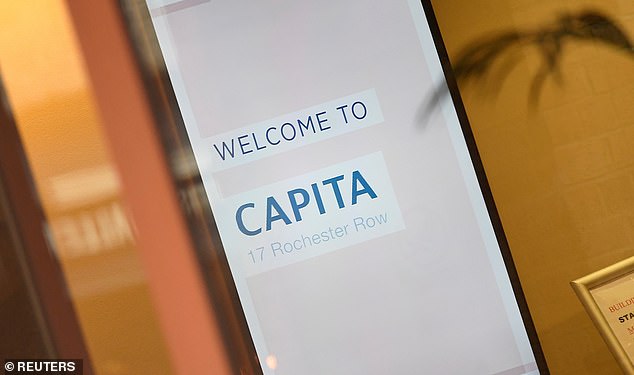 Capita (offices pictured) allowed hundreds to sign up for a weekly direct debit, before having to scrap system so anyone over 75 not paying won’t have their licence cancelled (file photo)

Capita allowed hundreds of over 75s to sign up for this service, only for them to realise you cannot have weekly direct debits because of their automatic cancellation system.

The system had to be scrapped so anyone over the age of 75 who isn’t paying will not have their licence cancelled.

A spokeswoman for TV Licensing said: ‘The majority of people pay their TV licence on a regular basis, however, there will always be some who need to be reminded.

‘Where no response is received to repeated letters, it is important to let households know the consequences of evasion.

‘Letters sent become progressively stronger in tone, depending on whether people respond to enquiries or not. TV Licensing does its best not to trouble genuine non-viewers, but we have a duty to enforce the law.’

MailOnline has reached out to the BBC for comment.