Barr says the case should go to federal court, as it involves rape allegation denials made by Trump while president. 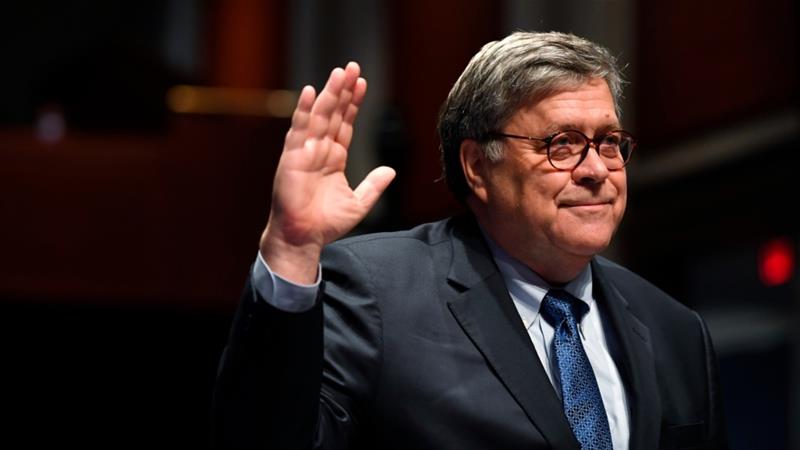 US Attorney General William Barr has defended his office’s intervention in a defamation lawsuit by a woman who accused President Donald Trump of raping her before he was president.

In a court filing on Tuesday, the Department of Justice asked to move the case to federal court and sought to install its own lawyers to replace Trump’s private legal team.

Justice Department lawyers argued that Trump was acting “within the scope of his office as president” when he denied raping former Elle magazine advice columnist E Jean Carroll in a Bergdorf Goodman department store in Manhattan in the mid-1990s. He also denied knowing Carroll.

The department said it had authority under the federal Westfall Act to move the case from a New York state court and substitute the United States as the sole defendant, potentially putting taxpayers on the hook for defence costs.

Speaking at an unrelated news conference, Barr said case law made it clear that elected officials who answer questions while in office about even personal matters are entitled to be defended by government lawyers.

“Any defamation claim is subject to US law,” Barr said on Wednesday. “This was a normal application of the law. The law is clear. It is done frequently.”

The filing came one month after a New York state judge rejected Trump’s bid to delay the case, putting Carroll’s lawyers in a position to have Trump answer questions under oath, perhaps before the November 3 election, and submit a DNA sample.

“The Department of Justice has never been used this way before, and Mr Trump has a very willing accomplice in the Attorney General [William] Barr who’s been willing to take whatever the president asks and go forward and do it,” she told Al Jazeera.

“I think most Americans would be very unhappy to realise that the Department of Justice is now basically acting as the private lawyer for President Trump.”

Sloan added that the department’s argument “didn’t have a leg to stand on” and is likely a delay tactic because the case “could have proven embarrassing for Mr Trump before the election, with documents and a deposition and even the DNA”.

‘How far he is willing to go’

Columnist Carroll has said Trump lied about attacking her, and smeared her integrity by concocting other lies to explain why she would make up the rape accusation.

Her lawyer said: “Trump’s effort to wield the power of the US government to evade responsibility for his private misconduct is without precedent, and shows even more starkly how far he is willing to go to prevent the truth from coming out.”

Trump has in multiple cases claimed immunity from civil lawsuits in state courts.

In rejecting that claim in Carroll’s case, Manhattan Supreme Court Justice Verna Saunders cited a recent US Supreme Court decision not to block a subpoena for Trump’s tax returns by Manhattan’s district attorney.