Ms Bierlein was named as interim leader last week when ex-chancellor Sebastian Kurz was booted out after a vote of no confidence, following the ‘Ibizagate’ corruption scandal.

Ms Bierlein has pledged stability, and vowed today that she will “seek to win Austrians’ trust.”

Her interim government will serve until September, when national elections are due to take place.

On her appointment, Chancellor Bierlein said: “Our land, our democracy needs all of you, your creative strength and your belief in Austria.

“Your engagement is irreplaceable for the health of our republic and all of Europe.”

In May, a video surfaced which appeared to depict the Austrian Vice-Chancellor, Heinz-Christian Strache, talking to an unidentified woman who claimed to be the niece of a Russian oligarch, at a luxury resort in Ibiza.

In the video, it appears that the then vice chancellor – who is the leader of Austria’s far-right Freedom Party – made suggestions he could offer her public contracts, in exchange for campaign support in the country’s parliamentary election. 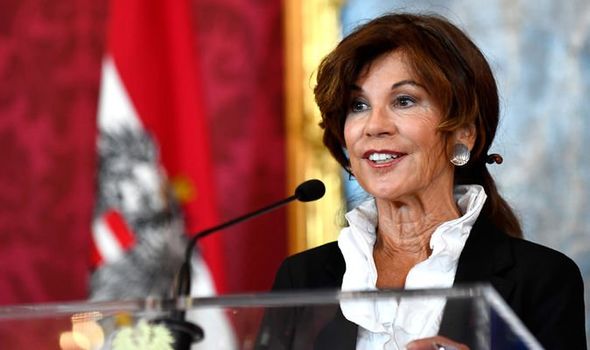 He said: “I am particularly glad… that for the first time in history, we will have a female chancellor at the head of the government, and secondly that women and men are equally represented in this government.

“In the future, no one will be able to say ‘unfortunately that’s not possible.’”

Prior to her appointment as Chancellor, Bierlein was a juror, serving as president of Austria’s Constitutional Court for over a year.

Ms Bierlein has no official political affiliation but is widely regarded as moderately right of centre on the political spectrum. Her first job as Chancellor will be to form a cabinet.