Vision of a child being ‘folded up’ and sat on by custodial officers, crying, “I can’t breathe,” was chillingly reminiscent of both the 2016 Four Corners story about abuse of children in Don Dale Youth Detention Centre in the Northen Territory, and the international outrage sparked by the murder of George Floyd in the United States.

In 2016, after the exposure of human rights abuses at Don Dale, the nation said never again.

But here we are again. Recent media coverage has revealed continued apathy on the part of our political leaders, too many of whom continue to defend the dysfunctional and ineffective systems in which these abuses occur.

Their wilful blindness does not excuse or mitigate the intergenerational trauma caused and perpetuated by the broken systems they oversee, or the failure of these systems to make the community safer.

Unfortunately, this continued apathy and dysfunction is now a familiar scenario.

In this week’s story, NT Territory Families Minister Kate Worden said: “…we are not the system we were in 2016 when the youth justice system sat within adult corrections…” But Minister Worden is well off the mark. Under her watch, in 2020 regressive bail amendments were introduced, resulting in a near-doubling of the number of children in detention, and police in the NT have routinely used spit hoods, the archaic restraint devices that captured Australia’s attention in 2016.

To this day children continue to be detained at Don Dale, a decommissioned adult prison that the Royal Commission declared five years ago to be “unfit for accommodating let alone rehabilitating young people.”

Almost all of these children are Aboriginal or Torres Strait Islanders. In short, youth justice in the NT is Australia’s shame. Still.

While the behaviour of some custodial officers at Banksia Hill this week is shocking, it is unfair to lay the blame exclusively on their shoulders. Youth custodial staff have an incredibly difficult and stressful job, working in inherently challenging settings that are woefully under-resourced.

Given the high prevalence of cognitive and developmental impairments among these children, custodial staff urgently need advanced training and support to work effectively and safely with these children, and to help them to de-escalate rather than exacerbate challenging behaviours.

The myriad of inquiries on this issue has turned up no shortage of evidence of the ineffectiveness of detention for reducing youth offending.

The damaging impacts of detention on children’s health and wellbeing is also indisputable.

Children typically enter the system with complex pre-existing physical and mental health needs, and their health and social outcomes after detention are typically very poor.

Indeed, recent research by our group has shown that the rate of death among children released from detention is more than six times that of their community peers, with around a third of these deaths due to suicide. This tragedy cannot be allowed to continue.

What is almost as shocking as the footage from Banksia Hill is the WA government’s response to it. 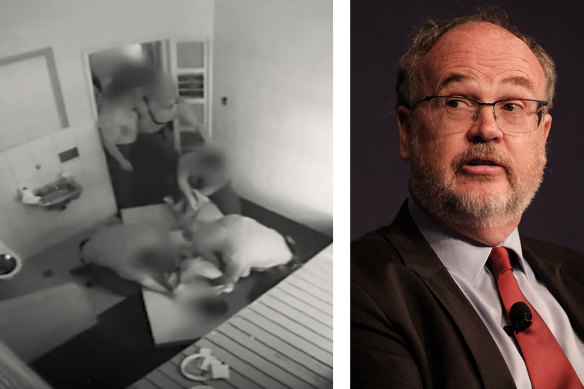 WA Corrective Services Minister Bill Johnston seemed unaware of the abuse going on under his watch.Credit:ABC/AFR

Like Minister Worden in the NT, it seems he is either genuinely uninformed, or wilfully blind to the abusive behaviour of staff in Banksia under his watch.

WA Premier Mark McGowan’s recent decision to consider banning ‘folding up’ is a small step in the right direction; but like the NT’s recent ban of spit hoods in police stations, it is too little, too late.

Although responsibility for youth justice in Australia lies with state and territory governments, this is clearly a national problem, requiring national leadership and solutions.

So what must happen?

First, federal Health Minister Mark Butler must end the arbitrary exclusion of children in detention from Medicare, so that these children can receive the comprehensive health and mental health services that they need, and that can address the underlying causes of their offending.

Second, routine independent monitoring in all places of detention is a prerequisite for real change.

Yet just a few weeks ago the United Nations Subcommittee on the Prevention of Torture cancelled its inspection visit to Australia after being denied access to facilities in New South Wales and Queensland. The Four Corners episode last week underscores the critical importance of these types of oversight.

Third, state and territory governments, in partnership with the federal government, must develop and establish measurable national standards for treatment and healthcare in youth detention, and a system of routine monitoring of these standards. What gets counted gets done.

It has been beyond disappointing to see the response from our political leaders this week, both eschewing the evidence and promulgating stigmatising misperceptions of this urgent challenge to our children’s wellbeing. Our children deserve better. Youth detention in our nation is Australia’s shame, still.