Beijing: Australia’s ambassador to China has been denied entry to a heavily guarded Beijing court where the espionage case against Australian blogger Yang Hengjun will be on Thursday.

Graham Fletcher attempted to enter the Beijing No. 2 Intermediate People’s Court in line with a two-way consular pact.

“Unfortunately we have just been denied entry to the court. The reason given was because of the pandemic situation but the Foreign Ministry has also told us it is because it is a national security case therefore we are not permitted to attend it,” Fletcher told reporters outside the court. 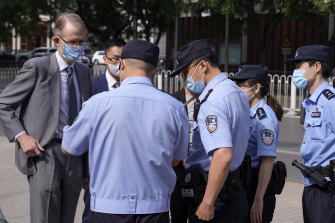 Australian ambassador to China Graham Fletcher, left, has his documents checked by policemen outside the No. 2 Intermediate People’s Court. he was denied access to Yang Hengjun’s case hearing.Credit:AP

“This is deeply regrettable and concerning and unsatisfactory. We have had long standing concerns about this case, including lack of transparency, and therefore have concluded it is an instance of arbitrary detention.”

Details of the case have been shrouded in secrecy, with no information released on which espionage agency Yang is alleged to have acted for. If convicted Yang faces a jail term of 10 years or more on charges of endangering national security. 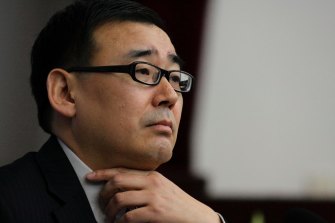 Yang Hengjun says he is stronger than ever despite being held for two years by Chinese authorities.Credit:AP

Payne had called on China to let Australian diplomats attend the trial, citing a bilateral treaty on consular relations. China held the one-day trials of Canadians Michael Kovrig and Michael Spavor in private earlier this year. The courts said at the time they involved state secrets.

The head of Amnesty International’s China team, Joshua Rosenzweig, said in a statement this week that the charges against Yang “appear to be a politically motivated prosecution for articles he wrote that were critical of the Chinese government.”

“This is an outrageous attack on his right to freedom of expression,” Rosenzweig said.

Yang, a Chinese-born Australian national who’s also known as Yang Jun, became well-known as a writer and commentator in China. He was detained in Guangzhou in January 2019 after flying from the US, and his arrest on spying allegations was formally announced that August. Yang was indicted in October last year. 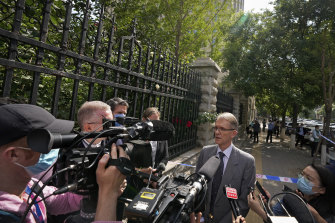 Fletcher said it was “regrettable” that the embassy was denied access.Credit:AP

Human rights lawyers Mo Shaoping and Shang Baojun will represent Yang when he appears at the closed-door proceedings.

Police lined the front of the court, their presence extending a block away, and checked the identities of journalists who were refused entry.

Yang’s wife, Yuan Xiaoliang, has been unable to see him since the couple were stopped at the southern airport of Guangzhou. She applied to attend the hearing but was rejected, friends told Reuters.

In his last message to family and friends in Australia recorded in March but released before the hearing Yang said that his health had deteriorated but they should not worry because he had “no fear”.

“If someone wants to take revenge on me for my writings, please explain to the people inside China what I did, and the significance of my writing to people in China,” he said, according to a copy of the message seen by Reuters.

Fletcher said it was possible a verdict would be announced on Thursday today, or there could be a separate verdict hearing.

Senator Payne said on Thursday that Yang’s correspondence with his family in Australia was “deeply moving” and it had been “immensely difficult” for him.

“We are not interfering in China’s legal system. The concerns we have raised are legitimate ones,” she said.

Yang wrote about Chinese and American politics online as a high-profile blogger, and also penned a series of spy novels.

Yang had previously been arrested in 2011 in China on suspicion of being involved in short-lived protests and released after three days.

He wrote in a letter to his supporters in Australia after he was released that he had once worked for the Chinese state security agency in Hong Kong and Washington, before migrating to Australia in 1999.