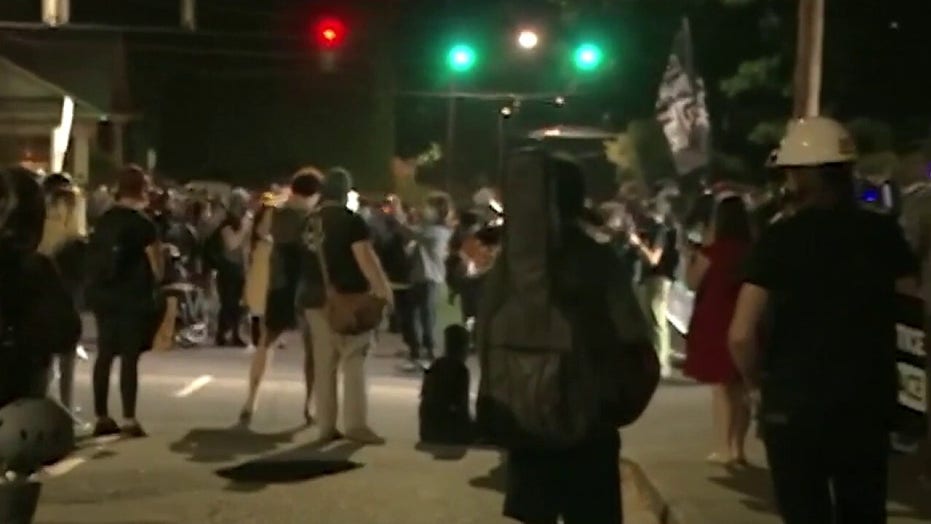 Far fewer people will face charges for their involvement in Portland rioting under a new policy from the DA’s office; Dan Springer has an update.

Hundreds of protesters in Portland who were arrested in the past 80 days of demonstrations will not face any charges, Multnomah County District Attorney Mike Schmidt announced Tuesday.

“The protesters are angry … and deeply frustrated with what they perceive to be structural inequities in our basic social fabric, and this frustration can escalate to levels that violate the law,” Schmidt said. “This policy acknowledges that centuries of disparate treatment of our black and brown communities have left deep wounds and that the healing process will not be easy or quick.”

The policy drops charges against people who were arrested for interfering with a peace officer or parole and probation officer, disorderly conduct, criminal trespass, escape, harassment and riot — unless they were accompanied by some other charge of physical violence or property damage.

Portland has been rocked for months following the death of George Floyd, as demonstrators decry the use of force by police, especially against Black people. Floyd, an unarmed Black man, died in police custody in Minneapolis in May; a video showed an officer kneeling on his neck for over eight minutes.

Peaceful demonstrations in the Oregon city have descended into chaos as police and protesters clashed outside of precincts in the north and east of the city, the police union headquarters and a building that houses police offices in downtown.

Some agitators have attacked officers, throwing fireworks, eggs and other objects at police and shining lasers in their eyes. Officers, meanwhile, have used pepper spray and made sweeping arrests to disperse crowds.

President Trump sent federal officers to Portland in July to tamp down violence and protect federal property, a move that prompted further unrest.

Agents from U.S.Customs and Border Protection, U.S. Immigration and Customs Enforcement and the U.S. Marshals Service were finally ordered to leave the city after accusations that unidentified officers were making unexplained arrests and without probable cause, claims that are now being investigated by the Justice Department.

Portland Police Chief Chuck Lovell, who was told of the policy change on Friday, pushed back against the new rules and said they don't change Oregon law, insisting that people who commit violent acts or intentionally damage property should be held accountable.

“Committing a crime is different from demonstrating,” Lovell said in a statement. “The arrests we make often come after hours of damage to private property, disruption of public transit and traffic on public streets, thefts from small businesses, arson, burglary, attacks on members of the community, and attacks against police officers.”

Schmidt, the prosecutor, emphasized that the rules don't apply to anyone who has committed an act of violence.

"If you are out there committing violence or damaging property, you will be prosecuted," he said.

About 550 protest-related cases have been referred to Schmidt's office since May 29, only 133 of which were felonies. More than 350 were misdemeanors or violations that included no claims of physical violence.

Schmidt acknowledged that the court system is already facing nearly two months of backlogs due to the coronavirus pandemic.