Three men have been arrested as anti-lockdown protesters clashed with police at a popular Melbourne shopping strip during day three of the state’s five-day coronavirus lockdown.

Video footage of the heated confrontation shows about a dozen police officers attempting to move on a small group of men and women, many who were not wearing mandatory face masks, at Eaton Mall in Oakleigh on Monday. 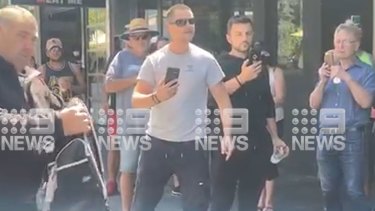 Heated scenes of Eaton mall between protesters and police on Monday.Credit:Nine

Other members of the group can be heard yelling “the police are causing violence” and “wake up” while shopkeepers look on.

A Victoria Police spokeswoman said officers were called to Hanover Street in Oakleigh after reports a group of people were gathering there about noon.

“The rest of the crowd dispersed without incident,” she said. 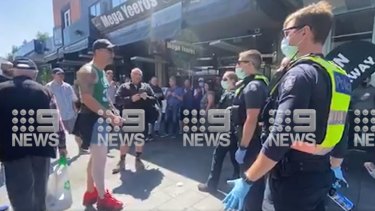 Eaton Mall at Oakleigh on Monday.Credit:Nine

Of those arrested, a 40-year-old Huntingdale man had since been released pending summons for breaching Chief Health Officer directions and failing to obey a police direction.

Two men, aged 43 and 65, were issued with infringement notices for breaching coronavirus restrictions.

“Police are investigating the incident and it remains ongoing,” the spokeswoman said.