Opposition supporters briefly block traffic in UK capital a day after poll that was won by Conservatives by big margin. 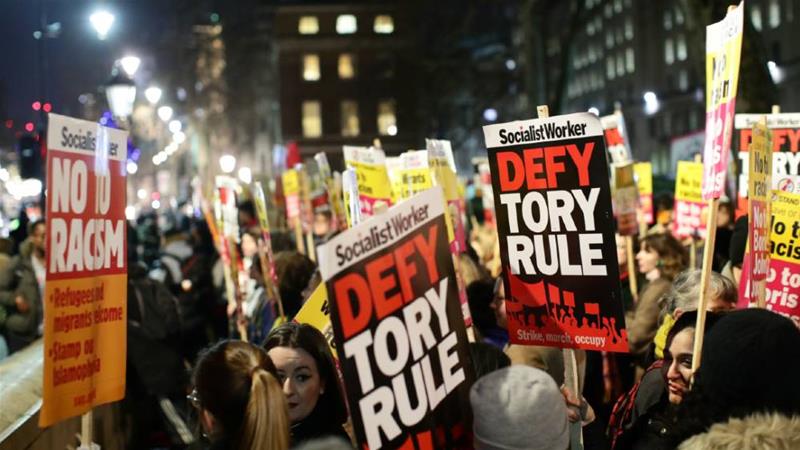 Hundreds of protesters have marched through central London to protest against the United Kingdom’s snap election result that saw Prime Minister Boris Johnson’s Conservative Party sweep to a landslide victory.

Chanting slogans such as “Boris Johnson, not my prime minister” and brandishing signs reading “Defy Tory Rule” and “Refugees Welcome”, the protesters on Friday walked swiftly from outside Johnson’s Downing Street residence to Trafalgar Square and on to the theatre district, blocking traffic and drawing a heavy police presence.

In a speech earlier on Friday, Johnson had called for “closure” over the divisions that have riven the United Kingdom for the past three-and-a-half years since Britons voted 52 percent – 48 percent to leave the European Union in a 2016 referendum.

“I urge everyone to find closure and to let the healing begin,” Johnson said hours after visiting Queen Elizabeth II to be reappointed prime minister.

But later on Friday, police were called to separate anti-Johnson and pro-Brexit demonstrators, according to the Daily Mirror newspaper. Whitehall, a central London road upon which several government ministries are based, was briefly closed meanwhile as scuffles broke out outside the Treasury building.