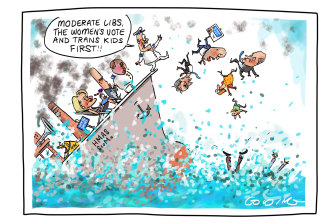 Politicians, business people, unions and economists all talk about how higher productivity can improve wages and economic growth without inflation.

This may have been the case when we made stuff in Australia. It is easy to measure the number of “units” – cars, fridges or washing machines – made or distributed or fixed per worker hour. However, in today’s more service-based economy what does this mean?

Of course, we can have more children or old people cared for per worker, but how does this impact on quality of care? We can have more kids per class or patients per nurse but are we better off? Obviously, productivity in these industries is closely connected to quality.

The corruption of words like sustainability and consultation has made them meaningless. Productivity has joined them.
Howard Tankey, Box Hill North

With friends like this …
Peter Dutton and Scott Morrison keep telling us that Xi Jinping wants a Labor victory.

Xi has a strange way of showing his support for Labor by sending a navel ship to cruise the west coast of Australia. Makes you wonder who China really wants to win.
Anne Maki, Alphington

Not worth the gamble
If it was eventually shown that climate change was a false alarm, the news would be very welcome. People of all political sways would breathe a huge sigh of relief: no one wants climate change.

It is politicians who have muddied the details, dividing people on a matter that transcends politics and requires multi-party co-operation. But if it looks, smells and tastes like climate change, it must be treated as such, even if a more favourable explanation might present later.

The latter provides hope but can’t be gambled on — there is too much at stake. Nor is the wait-and-see approach an option as the consequences may be fatal. Transitions in the way the world does things present complex challenges but with proactive and responsible governance, they become more manageable.

The consequences of inaction and highly visible (and therefore politically advantageous) reactive responses are usually much less so.
Emma Borghesi, Rye

Encouraging signs
Your correspondent (“It’s not a spectator sport”, The Sunday Age, 8/5) opens a real can of worms with his observation that we’ve become a nation of spectators not participants – of course, as letter-writers we’re also reinforcing that impression.

One of the encouraging aspects of the emergence of credible independent political candidates is the opportunity it offers for wider democratic participation.

This is a positive sign for the health of the economy as well as the political arena.
Jenifer Nicholls, Armadale

We need a plan
Your editorial (“Think about climate change when you vote”, 13/5) and supportive letters (14/5) indicate the wave of concern the majority of Australians feel about the need for stronger and more swift action on climate change. Regardless of which party wins the election, this call to arms will continue.

What is now needed to assuage the concerns of sceptics and the communities that will be affected by the phasing out of fossil fuels is a comprehensive plan to ensure stakeholders are guaranteed support during and after the transition to renewable energy.

Such a plan may be the catalyst for ensuring those who fear for their livelihoods and communities support the urgent action needed to halt the inexorable rise in global temperature.
Graeme Lechte, Brunswick West

This issue exposes the worst aspect of our political discourse: the appeal to our baser instincts. With record-breaking debt and increasing inequality, it’s intensely irresponsible for both major parties to support this.
It’s particularly hypocritical for the Coalition government as it supports lower real wages, and it’s gutless of the ALP to allow itself to be wedged by their cynical ploy.
Kevin Burke, Sandringham

Don’t forget the Greens
In your article, “Scientists back Labor on climate action plans” (The Age, 14/5), you write: “Labor’s climate policies are significantly superior to those offered by the Coalition, say a group of leading scientists.” The rest of that sentence should read: “but they are simply not good enough to save the Great Barrier Reef.”

I genuinely want real action on climate change via comprehensive transition plans that respect and look after fossil-fuel workers and communities and will reduce emissions to keep global heating below 1.5 degrees. Therefore, I’m voting for the Greens because that party’s policies are far superior.
Michelle Goldsmith, Eaglehawk

Gay Alcorn sends an exclusive newsletter to subscribers each week. Sign up to receive her Note from the Editor.