Using his thumbs, Dr Nesar Ahmed Timory began compressing the chest of three-month-old Safiullah at 10.23am on Tuesday.

Safiullah was severely malnourished. He was fevered and had diarrhoea. A month ago his twin brother, Atiqulla, died from similar afflictions in the same hospital.

On the other side of the bed from where Dr Timory applied a sure but gentle press, a nurse, Shima Osmani, held oxygen to the child’s mouth. Safiullah’s mother, Tahera, stood by and groaned. 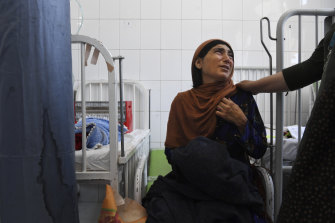 It's become a tragically familiar scene in this part of south Asia. Drought, war and flood have combined to create a tragedy in Afghanistan that is – in some places – as severe as anything since the US-led coalition invaded the country in 2001.

Child malnutrition is one symptom of this triple-headed crisis.

“This is the highest rate of patients in 18 years,” said Dr Mirwais Aabidi, who runs the Mofleh Pediatric Hospital on the fringe of Herat, a major city in western Afghanistan. 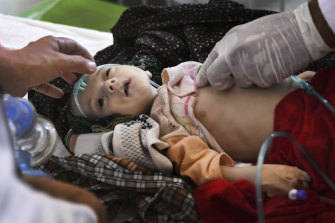 Medical staff at the Mofleh Pediatric Hospital perform CPR on three month old Safiullah in an attempt to save his life.Credit:Kate Geraghty

Along with Yemen and South Sudan, it is the most severe emergency of its kind in the world, the aid and development agency says.

Safiullah’s father is a day labourer in the Kushki Kuhna district of the Herat province. The family owns no land. Some days he gets work, some days he does not.

And among the poor, there is a lack of support for, and counselling about, infant nutrition. Extremely young mothers are particularly vulnerable. In the same intensive care room in which Safiullah was being treated, 15-year-old Shahr Banoo nursed Saber, her second child. She struggled to express milk for the 10-month-old until she was assisted by a nurse. 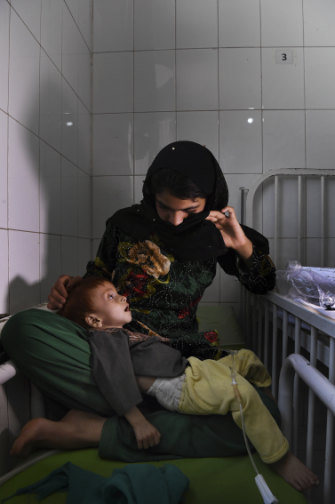 Children born to malnourished mothers are at heightened risk of disease and illness. But doctors here say mothers who are themselves ill and under-nourished are often told that their breast milk is harmful. The opposite is in fact the case. Death from malnourishment is preventable.

“Unfortunately this information does not exist among the poor families,” said Abdul Qayum Fayeq, head of the Mofleh hospital’s malnutrition section.

“We are witnessing many more cases,” said Dr Fayeq. “This country is in conflict, people are poor, and at the same time they don’t have the knowledge or information.”

The Regreshan camp for displaced persons lies about a 10-minute drive east from the Mofleh hospital. The camp itself consists of about 3000 tents – some supplied by UN agencies, some stitched together with rags and sticks. 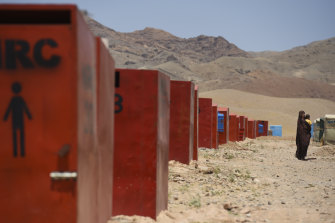 Passing a row of toilets, Ziba aged 21 years walks back to her family’s temporary shelter in Regreshan camp.Credit:Kate Geraghty

In the west of Afghanistan, about a quarter of a million people are living in camps like this. They were driven here by drought, or by a need to escape Taliban control of their local area.

And when the drought broke over the past couple of years, it did so in the form of floods that pushed thousands more off their land.

At a mobile clinic set up to monitor child nutrition in the camp, 21-year-old Gul Zada sat to feed Qudratullah from a supplied food package. The seven-month-old had been born in the camp, after drought prevented Zada’s family from scratching out a living in the Baghdis province.

Zada, a mother-of-five, expected to stay in the camp for another two or three years. At least there was drinking water, some education, and some security, she said. 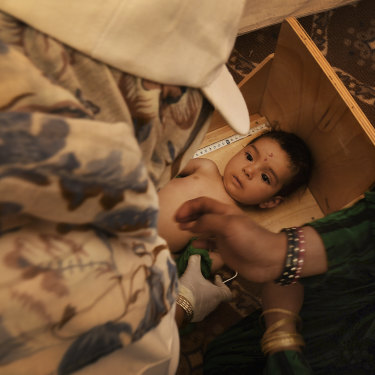 Qudratullah aged seven months has his height measured in a nutrition centre in Regreshan camp.Credit:Kate Geraghty

Yet Shaima, a nutritionist working at the clinic, said the number of children presenting with malnutrition, which significantly reduces resistance to disease and other illness, continued to increase.

“Even though we are providing awareness raising sessions about nutrition and hygiene – they don’t have food to eat,” Shaima said.

In the Regreshan camp, the most severe cases of malnutrition are referred to the Mofleh hospital.

Here, on recent trends, about one in 10 of the 63 malnourished children admitted today will die.

At 10.29am on Tuesday, Safiullah was pronounced dead.

Dr Timory removed his stethoscope, grimaced, slumped his shoulders and turned away. Tahera crumpled. Her twins had been born soon after her 21-year-old son had died from cancer. She described them as her miracles.

Later, she moved through the room and embraced the nurses who had tried to help.

“Pray for me,” she asked them. 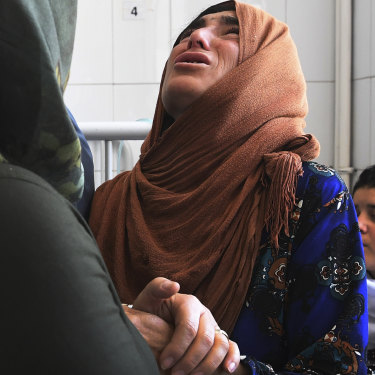 Jacob Saulwick and Kate Geraghty travelled to Afghanistan with the assistance of Unicef. Readers can make donations here: www.unicef.org.au/afghanistan or tel:1300 884 233