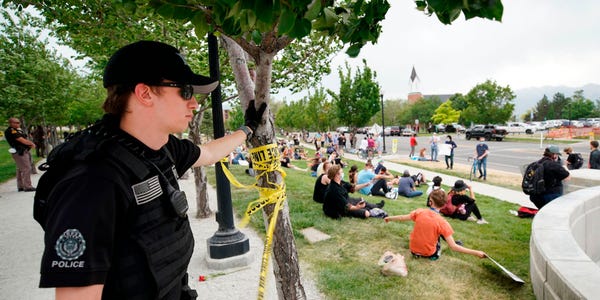 A Salt Lake City police officer shot an autistic 13-year-old boy on Friday night after responding to a call that the boy was having a "psychological episode," The Salt Lake Tribune reported.

The boy Linden Cameron was identified to local outlets by his mother Golda Barton, who told the KUTV that she called the police requesting a crisis intervention team (CIT).

Barton said Cameron was having a mental breakdown and asked CIT to transport him to a hospital.

"This is how to deal with people with mental health issues. So, you call them, and they're supposed to come out and be able to deescalate a situation using the most minimal force possible," Barton told the KUTV.

The Salt Lake City Police Department said the boy was shot after he ran away from officers and was pursued.

"During a short foot pursuit, an officer discharged his firearm and hit the subject," Sgt. Keith Horrocks said during a press conference.

According to KUTV, Horrocks said Cameron had "made threats to some folks with a weapon," but Barton said he was unarmed.

"I said, 'Look, he's unarmed, he doesn't have anything,'" she told KUTV. "He just gets mad and he starts yelling and screaming. He's a kid. He's trying to get attention. He doesn't know how to regulate."

The Tribune reported that no weapon was found at the scene on Friday and that Cameron was taken to the hospital and is in "serious condition."

Salt Lake City Mayor Erin Mendenhall promised a "swift and transparent inquiry" into the shooting, according to  The Tribune.

"While the full details of this incident are yet to be released as an investigation takes place, I will say that I am thankful this young boy is alive and no one else was injured," Mendenhall said in her statement. "No matter the circumstances, what happened on Friday night is a tragedy, and I expect this investigation to be handled swiftly and transparently for the sake of everyone involved."

The New York Times reported that police are expected to release body camera footage of the incident by September 21.

"I know that these things are very difficult for the community as a whole, and there is a process in terms of looking at what happened and investigating it," Detective Greg Wilking, a spokesman for the Police Department told The Times.

Wilking did not identify the officer who fired his gun.

The Tribune reported that police in Utah have shot 18 people this year, 11 of whom died. Last year police shot 15 people, and 12 were killed.