If it’s true that money talks, $80 million could be expected to generate some valuable discussions.

But, as details obtained by The Sunday Age reveal today, that is far from the case when it comes to the generous rewards offered by Victoria Police for information that leads to a conviction in a previously unsolved crime. 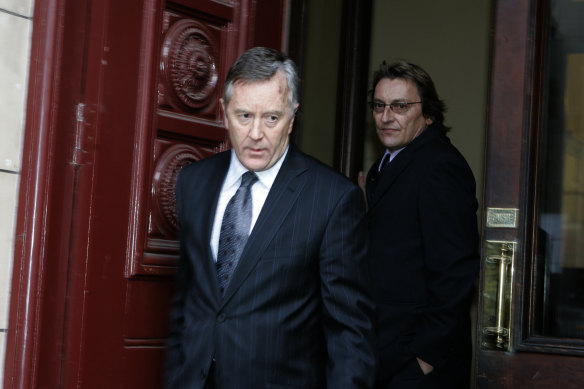 Andrew Fraser (left) was reported to have received a reward after giving evidence against Peter Dupas over the murder of Mersina Halvagis.Credit:Michael Clayton-Jones

The scenario is all too familiar. Police hold a media conference featuring a portrait of a victim, the victim’s family members – still in the grip of grief without the closure that justice could deliver – make emotional pleas for information that might help police catch the killer of their loved one after years without hope. Police say they need the public’s help to break open their investigations and offer a reward – often of $1 million – for information that leads to a conviction.

A far less familiar scenario is one in which police hold a media conference and triumphantly announce that the $1 million has served to flush out new information that has led to an arrest and charges laid against the alleged perpetrator of a long-unsolved crime. It is less familiar because it simply does not happen.

As Tom Cowie reports today, data obtained under the Freedom of Information Act shows that since the 1960s, 185 cases remain unsolved in this state after rewards for information totalling $80 million were offered by Victoria Police. Police have refused to provide an example of even one instance in which a reward was paid for the successful conviction of a perpetrator. Former homicide detective Charlie Bezzina says he is aware of only one reward payout.

While that doesn’t necessarily lay bare a failed system, it does speak in part to a particularly murky one. When it comes to police rewards in Victoria, very little is clear.

Some of that opacity comes with the territory and is understandable. Police often will be hoping someone close to a perpetrator will find a big financial lure too hard to resist, but that person may also insist on anonymity in exchange for vital information. Others may fear retribution if their role in a conviction becomes known. And some people simply don’t want the world to know that they have come into sudden riches – few lottery winners seek public attention.

Those with the most useful information might have acquired it through criminal activities of their own, and police might not have leapt at the opportunity to let Victorians know they were paying out huge sums of money to crooks. In 2013, The Age reported that former high-profile criminal lawyer Andrew Fraser was believed to have received a large slice of a $1 million police reward for information – believed to have been acquired while he was serving a prison term – that led to the conviction of serial killer Peter Dupas for the murder of Mersina Halvagis. Neither Fraser nor police confirmed the report.

The desire for confidentiality in such cases may be understandable, but is it acceptable that the use of such large amounts of public funds remains cloaked by secrecy? In what way, if at all, are police publicly accountable for the decisions they make in the instigation and management of rewards for information?

Police applications for rewards are rubber-stamped by the minister for police, but there is little political accountability for this use of public funds.

For families still desperate for justice after years of pain and frustration, the public offering of a reward can bring new hope that police will find the vital missing pieces to secure an unlikely conviction.

The arrest last week in India of a man accused of killing Toyah Cordingley on a beach in Queensland in 2019 came after the offer of a $1 million police reward. But the number of open reward-related cases in Victoria suggests that almost exclusively hopes are dashed.

And those numbers raise a fundamental question: do police rewards work? Is there any merit in the use of cash for convictions? Is there a better way to crack open stubborn cold cases?

These are critical questions, but they cannot be answered while justice operates in the dark.

Michael Bachelard sends an exclusive newsletter to subscribers each week. Sign up to receive his Note from the Editor.